After a brief hiatus, HighwayHighlights returns with a write-up about a small town up in the northern reaches of Minnesota called Blackduck. Like many other Minnesota towns with animals in their names (Pelican Rapids, Moose Lake, White Bear Lake, to name a few), Blackduck has commemorated thier namesake with various statues around town, literally of black ducks,  making it a roadside attraction enthusiast’s destination. 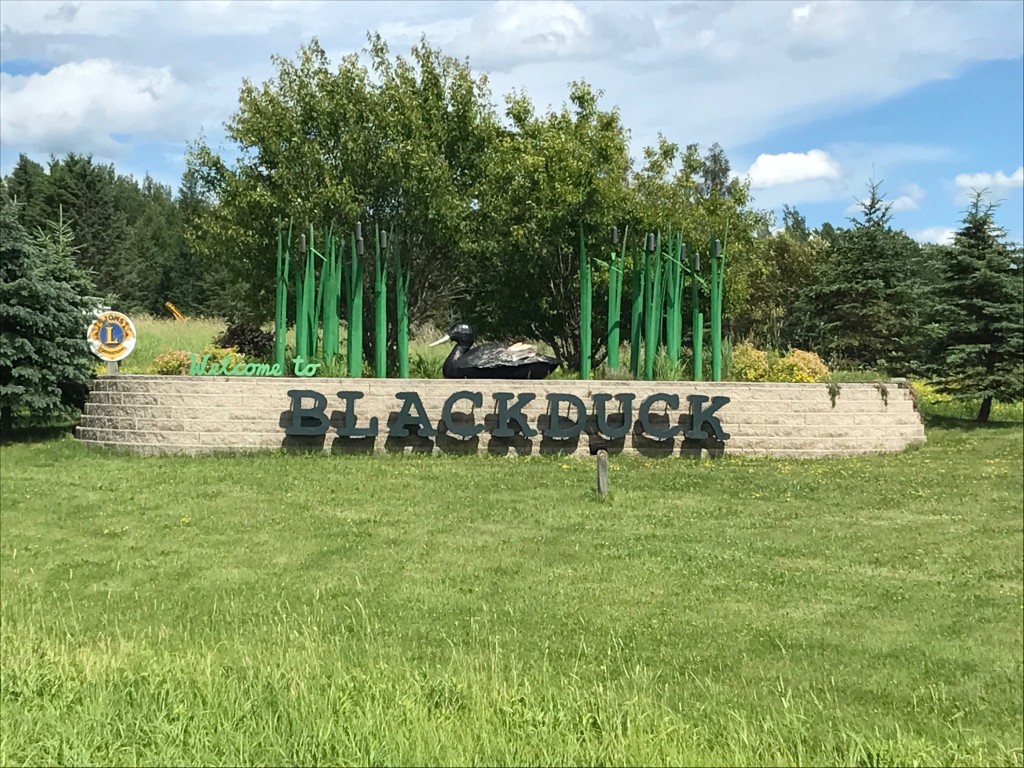 The first thing you will see when entering the small town with a population under 800 is their welcome sign, which of course features a black duck in a re-created scene of a duck floating in a pond.  A nice touch, one thinks, as they arrive into town on Highway 71 from the south. But as you get further into town, you may notice another black duck (below), a smaller, bulbous duck on a 4′ pedestal in front of the Drake Motel.  (A male duck is often referred to as a drake). This black duck closely resembles a decoy and is somewhat devoid of any emotion. 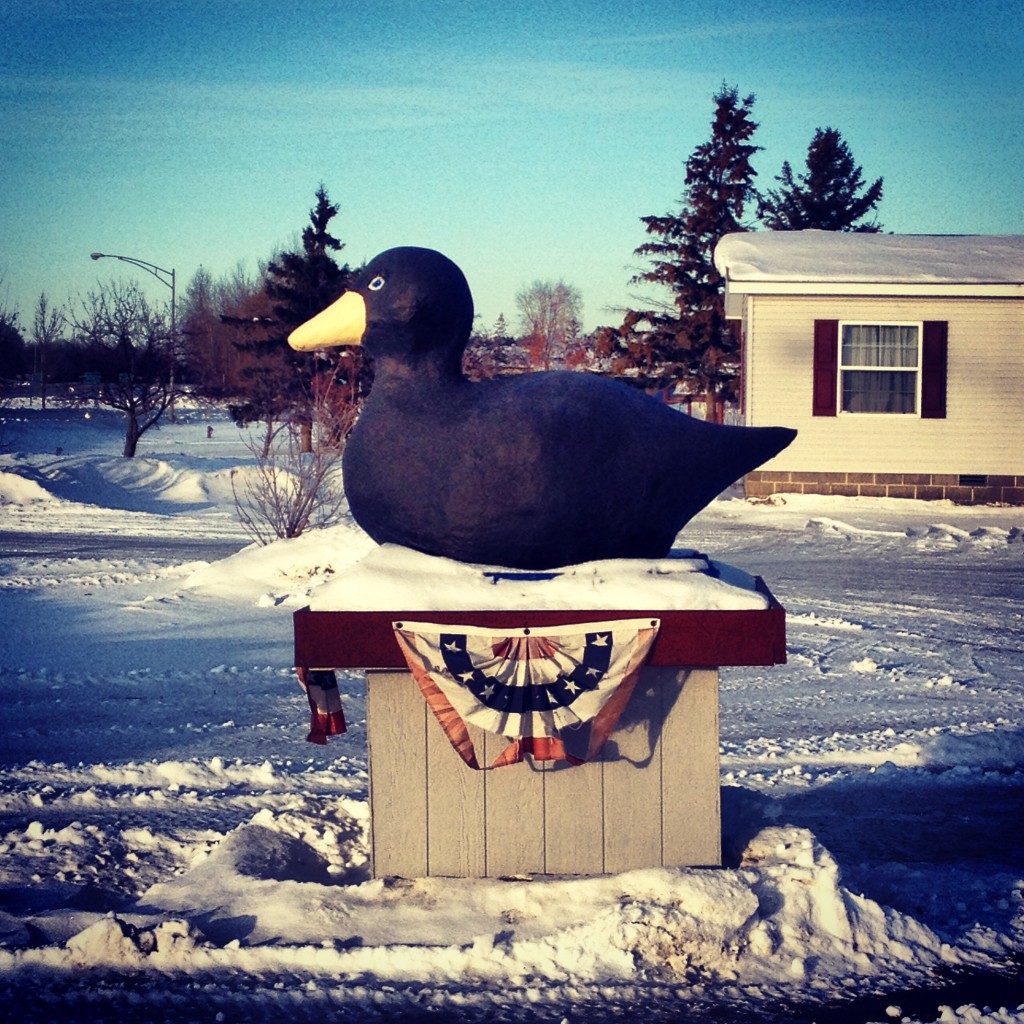 As you continue into town, you will see the pride and joy of them all, the world’s largest Black Duck.  Perfectly mounted in a swooping position, painted in bright colors, and just waiting for a photo opportunity, it’s easy to find in a small wayside park right off the highway just north of the Drake Motel. It came from F.A.S.T. Corporation in Wisconsin back in 1983 and begs motorists off the highway to examine it up close.  Just in view of the iconic statue is the Blackduck water tower, which of course features a duck painted on it as well. 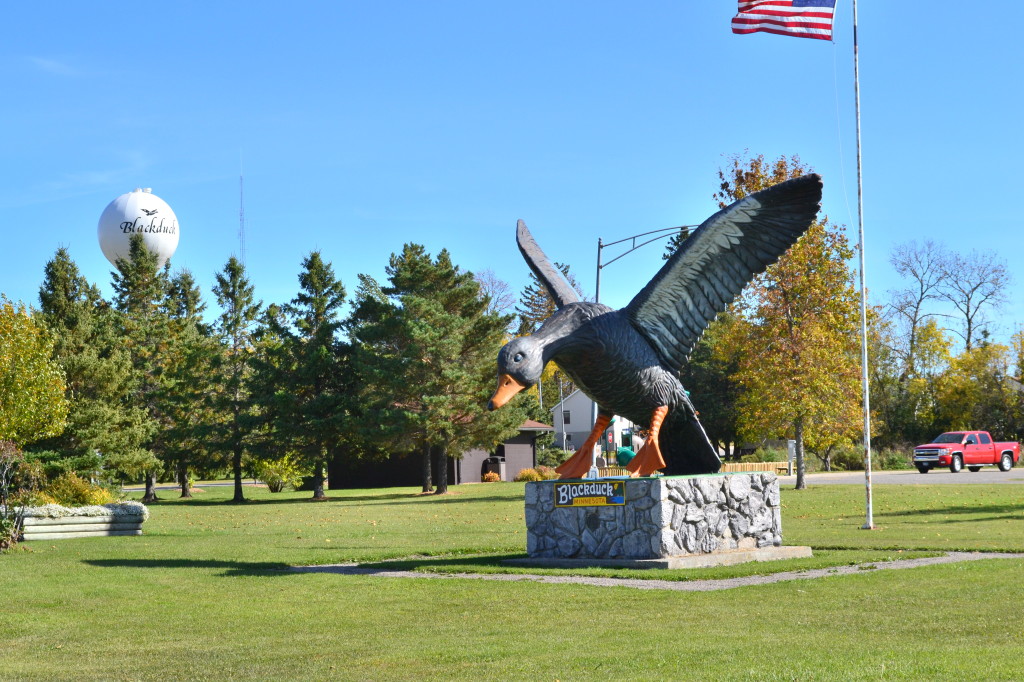 But wait, there’s more!  After you have gotten your fill of admiring this fine roadside attraction to your heart’s desire, head into downtown Blackduck where there is one more statue to be found: an oft-overlooked black duck who was built in 1942. This one is fenced off on a street corner with a plaque that commemorates it as the “Original Blackduck.”  But this actually isn’t true;  the concrete statue actually replaced one that was built before that but was falling apart. 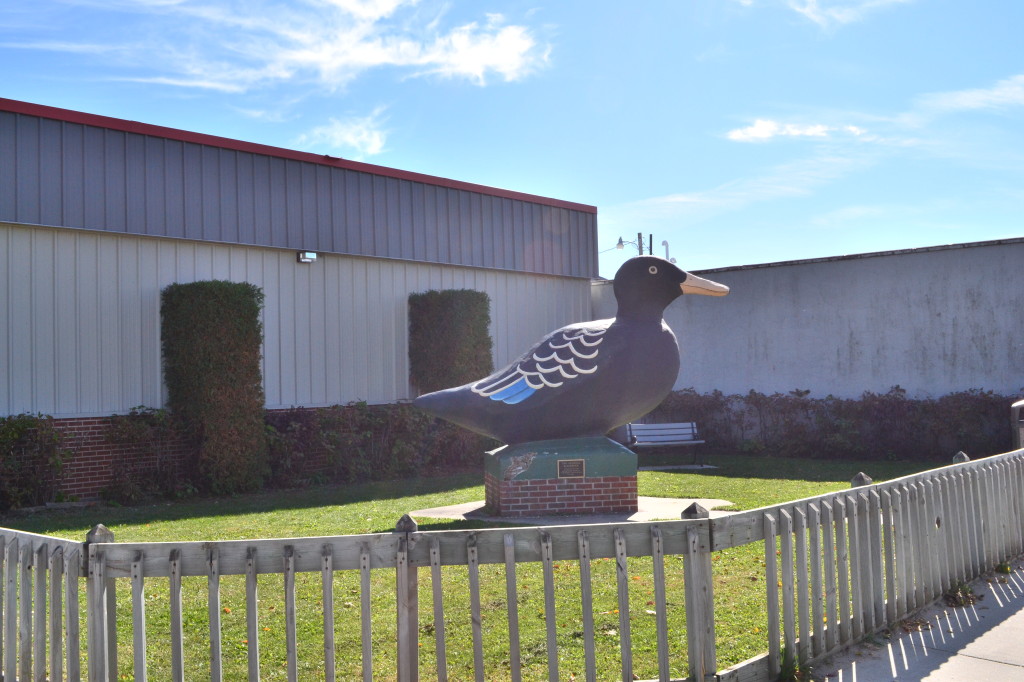 We are proud of Blackduck for capitalizing on their namesake in order to give us more roadside attractions and a reason to stop in this little town north of Bemidji.  North of here, it’s a pretty lonely stretch of road until you reach International Falls, on the border of Canada.

While in the area:  Blackduck is a terrific half-way point on your journey from Paul Bunyan and Babe the Blue Ox in Bemidji and the Lost Forty just east of Blackduck. Or head over to nearby Funkley, MN, which has now claimed the distinction of Minnesota’s smallest incorporated town after Tenney, MN, decided to dissolve.  Funkley has a killer little biker bar that you have to see, as well.