In the previous installments of the Paul Bunyan Tour,  we covered Minnesota’s Paul Bunyan and Babe statues, as well as his personal effects scattered all across the state.  This week we will wrap up the tour by paying a visit to each of Paul’s closest associates, including his dog.

The first Bunyan amigo we’ll look at is found in Hackensack, MN, in the heart of Bunyan Country.  Along the shores of Birch Lake stands Paul’s ladyfriend, (and in later years, officially his “wife”),  Lucette Diana Kensack.  Officially erected in 1991, there was even a naming contest held in Hackensack.  Lucette later featured a small statue of a miniature Paul next to her, and apparently not long after the statue of Paul Jr. went up, someone complained that they should be married since they had a child, and not living in sin. So shortly thereafter, someone at the Hackensack Chamber of Commerce “found” a marriage license, charred around the edges because of a fire in the building about 100 years ago. They then began selling souvenir copies. The small Paul next to Lucette has since disappeared.

Paul Bunyan Center, originally in Baxter/Brainerd (above), was closed in 2003 and re-opened a few years later about 8 miles outside of town on a farm. Most of the awesome rides and the haunted house are now gone, but the talking Paul Bunyan statue remains, along with the Babe Statue in the parking lot.  What also remains here are two of Paul’s associates:  Henry the Squirrel, and Sport the Reversible Dog. 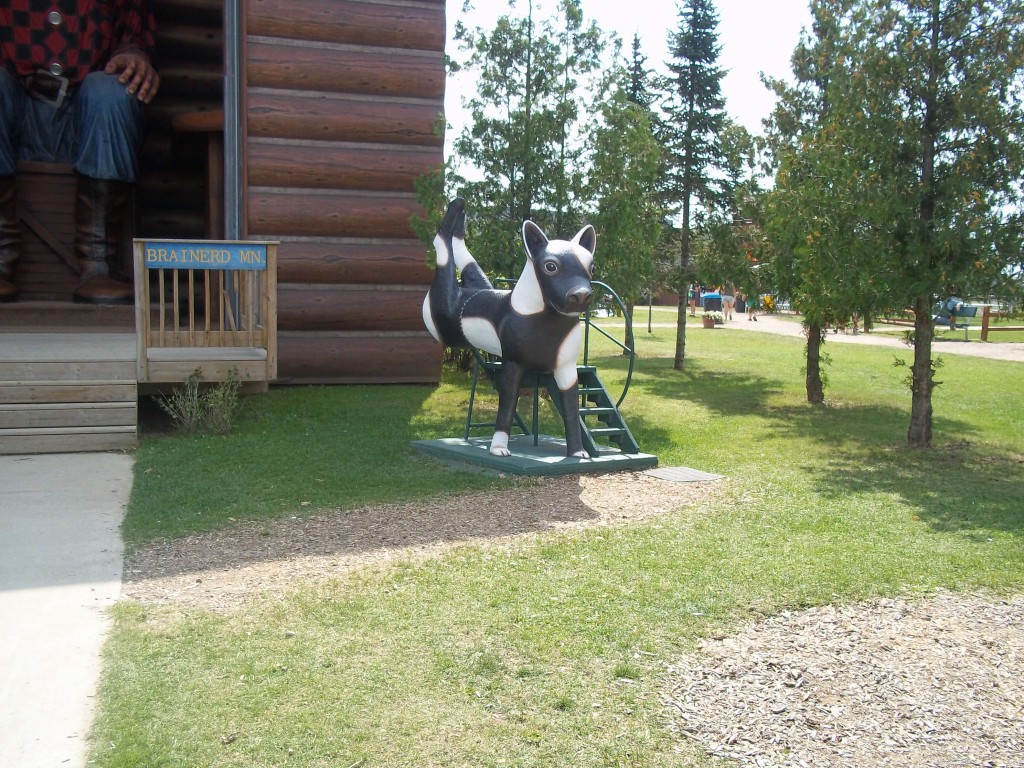 Next to talking Paul is Sport, Paul’s Dog.  The story goes that Sport was accidentally cut in half by a wayward axe in Paul’s logging days, he was sewn back together upside down.  The “running” joke is that when he gets tired running on his front legs, he flips onto his rear quarters and keeps going. 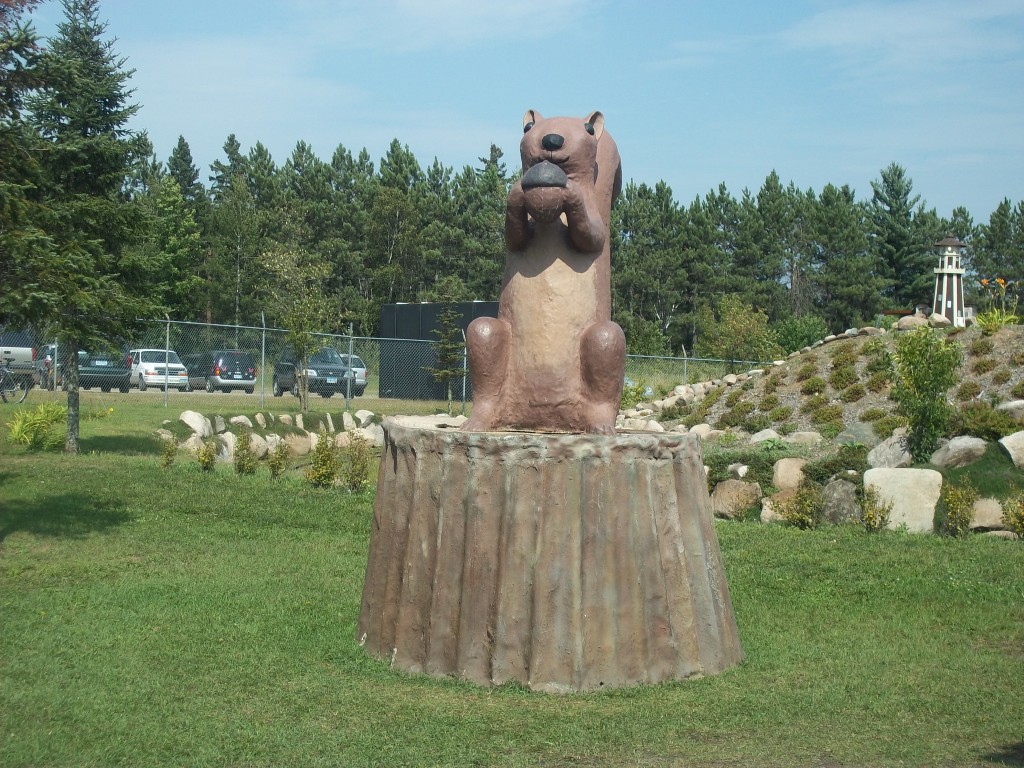 Paul’s other pet, Henry the Squirrel, also stands nearby.  This happy little critter grew to immense size from feeding on Paul’s prune pits during Paul’s time spent at the legendary logging camp on the Onion River. 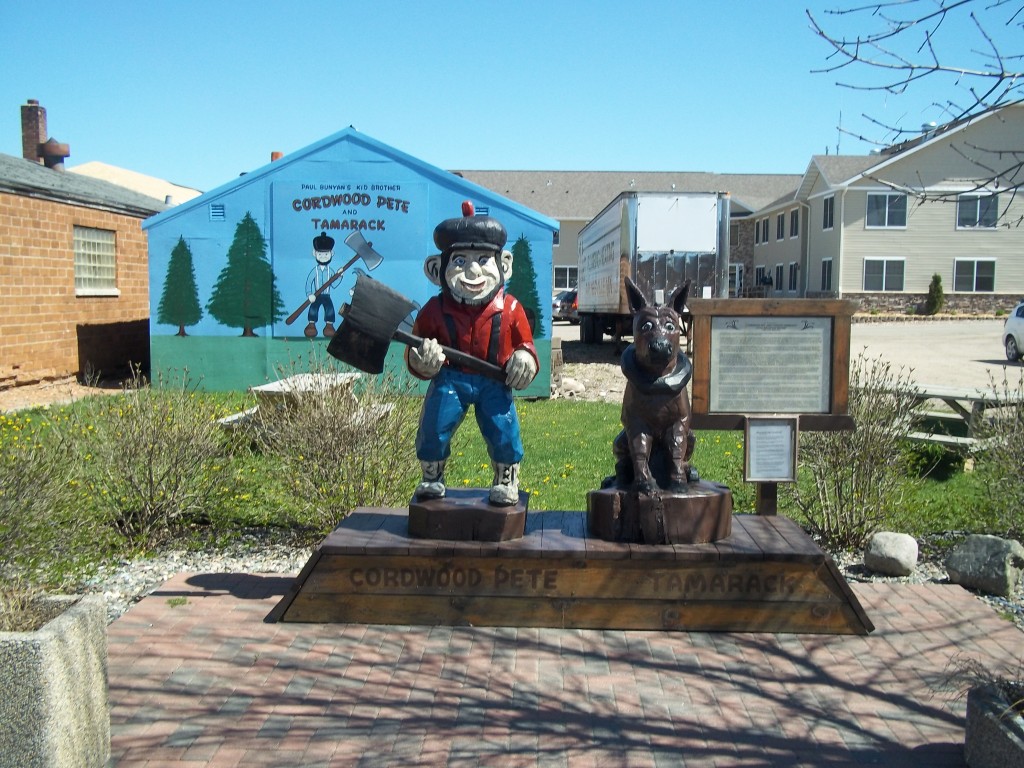 Up in the northwestern Minnesota town of Fosston is one of Paul’s younger siblings, Cordwood Pete and his sidekick, Tamarack the Donkey. The story goes that Pete, measuring in at only 4’9, never got any food growing up due to his giant older brother taking it all. Pete was known to do the work of two men, and local lore dictates that Cordwood Pete may have actually been based on a real logger from days past. The chainsaw-sculpted statue of the pair stands in downtown Fosston. 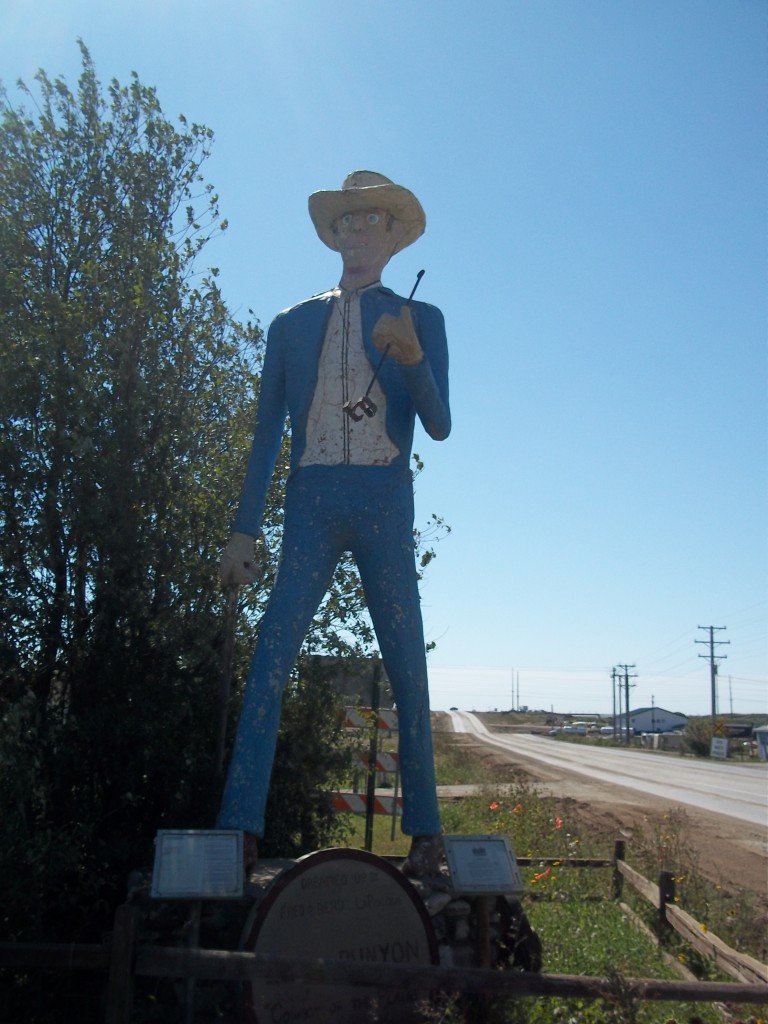 Paul also had another brother allegedly, across the border in North Dakota named Earl Bunyon.  Earl chose the cattleman route, choosing to make his career by driving herds of cattle across the prairies of North Dakota.  There is a statue of the cowboy in New Town, ND.  The creators of this quirky character are actually buried underneath the statue. It is unclear if the mispelled last name was intentional.

Paul was not without his detractors, of course.  Over the years he had a few enemies, including:

Colonel Cobber, Backus, MN: The quirky chainsaw-carved character, created by Hackensack artist Ross Olsen in 2006, is based on stories of a legendary “salesman” who struck a deal with Paul Bunyan, a sweet-corn fan, that if Bunyan cleared the trees, Cobber would grow more corn for him. But, eventually the deal went bad and Cobber undercut Bunyan’s logging and hired in his own logger, E.W. Backus, whom the town is named for. 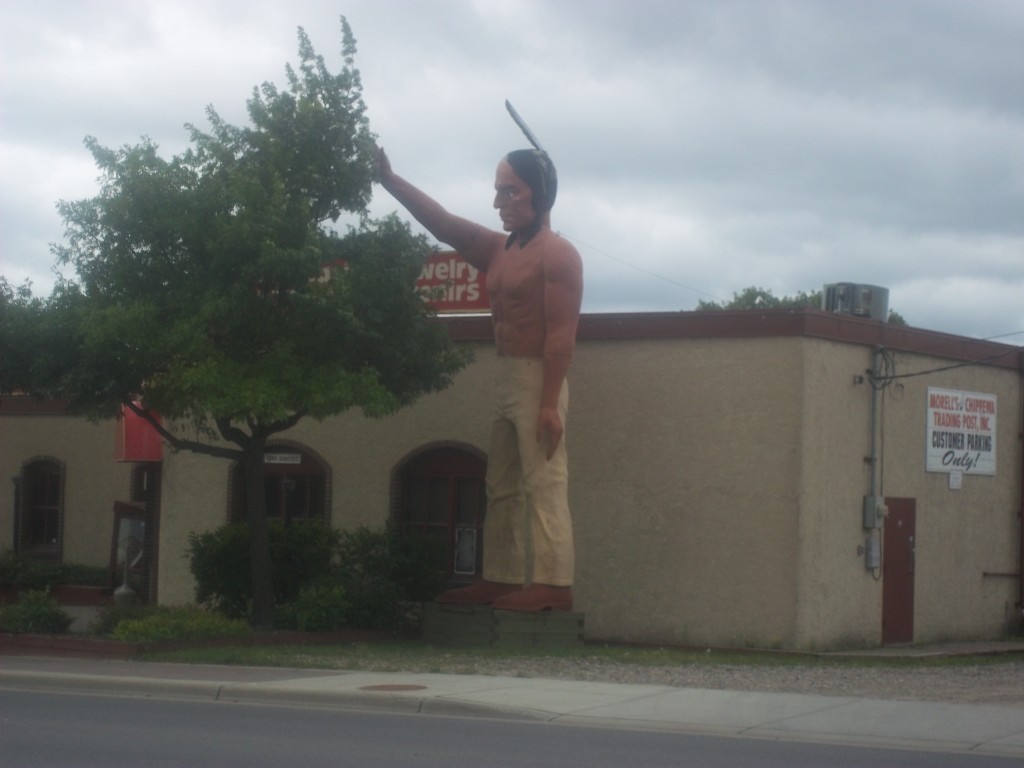 Nanabozho, Indian Chief, Bemidji, MN: According to Chippewa legend, Chief Nanabozho was so fed up with Paul’s forest destruction, that after several weeks of fighting, he beat poor ol’ Paul to death with a fish. Paul was later buried in Kelliher, as we learned last week.  This Muffler-Man styled Indian Chief which stands across the street from the original Paul and Babe, and is almost completely obscured by a tree nowadays.

Due to Minnesota’s storied logging history, it’s only natural that you would find a handful of Bunyan lookalikes in Minnesota;  after all, there were quite a few other notable loggers, pioneers, and axemen who actually did exist and are honored via a statue. 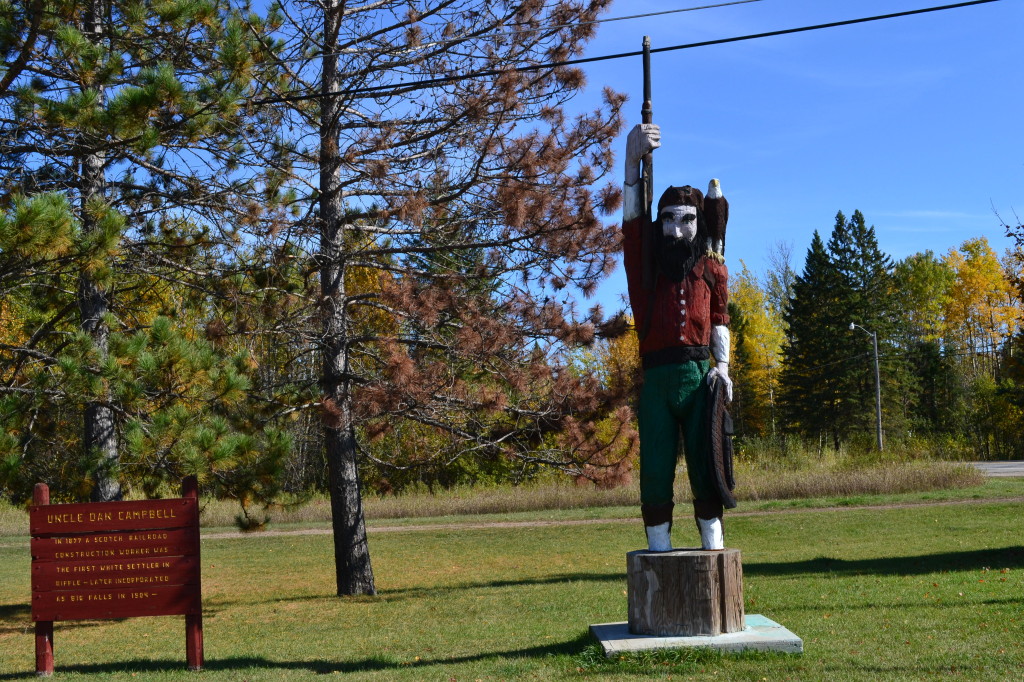 Uncle Dan Campbell, in Big Falls, MN: Uncle Dan Campbell was a Scottish railroad laborer and the first white settler in these parts back in 1877. There is a woodcarved statue of Campbell in this tiny town near the Canadian border and a small sign with some info. He carries a rifle and has a bald eagle perched on his left shoulder.

And just north of there in another small town of Littlefork, MN, there is a statue of “Jack Pine Savage,” another folk hero of the northwoods.  This statue, a fiberglass creation from F.A.S.T. Corporation in Sparta, WI, is made from the Paul Bunyan mold seen also in Wisconsin Dells, and Aberdeen, SD.  He replaced a woodcarved statue around 2009.

That concludes the Minnesota Paul Bunyan tour! We hope you enjoyed a few tall tales about Minnesota’s most famous folk hero and his friends.