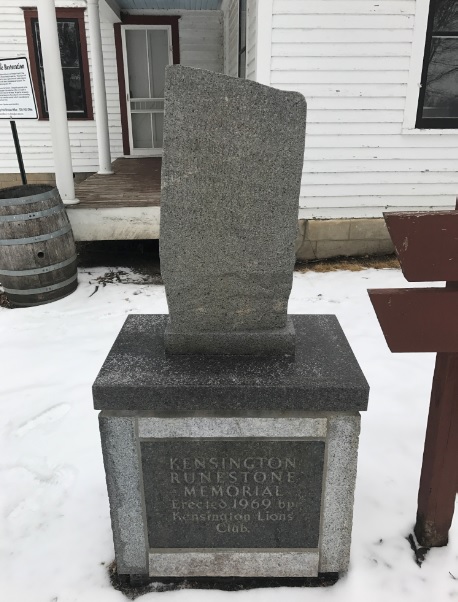 In HighwayHighlights.com’s early years, I often wrote short, to-the-point articles about Minnesota roadside attractions and where to find them, offering a brief description of the attraction and its history, and often something else nearby if you’re in the area.  But as the site grew and I saw and learned more things, I now take more time to research, write, and edit the articles, often with more photos and information.  Today we’re revisiting an article I penned about the Kensington Runestone, with some new photos, insight, and information. The story is intriguing, we know that.  Whether it’s true or not is sharply debated. What is absolutely not up for debate whatsoever is the enduring lore, influence, and romanticism that the Kensington Runestone has brought Minnesota for over 100 years and will likely continue to. 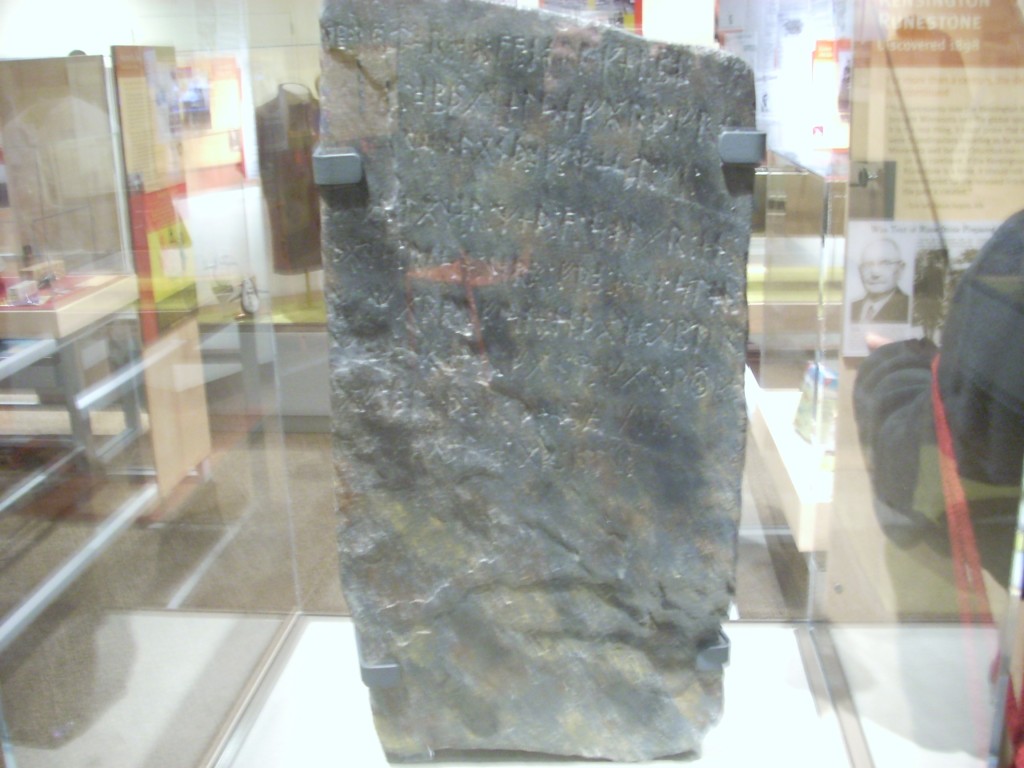 A more-detailed version of the story goes like this:  In 1898, a Swedish immigrant named Olof Ohman was clearing some swampy, hilly land he had acquired recently to the west of Alexandria, MN,  and found a slab of greywacke sandstone tangled in the roots of a small poplar tree.  He and his son unearthed the slab and noticed runic markings on the slab.  The markings were translated by a linguistics expert at the University of Minnesota, who dismissed the whole thing as a hoax.  The translation read, “Eight Goths and twenty-two Norwegians on an exploration journey from Vinland to the west. We had camp by two skerries one day’s journey north from this stone. We were [out] to fish one day. After we came home [we] found ten men red of blood and dead. AVM save [us] from evil.””[We] have ten men by the sea to look after our ships, fourteen days’ travel from this island. [In the] year 1362.” 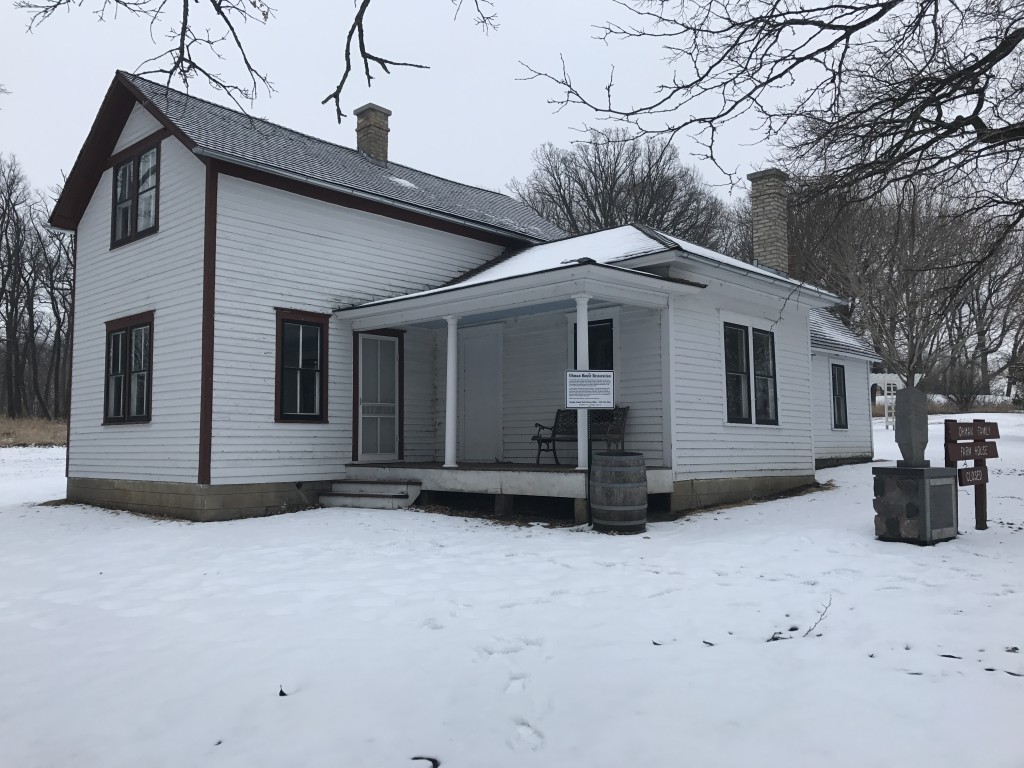 If this were true, it would be historical proof that Viking explorers came from Europe over a century before Columbus, and made it as far as Minnesota, which would then mean that Minnesota was the birthplace of modern-day America.  The translation was sent to experts in Norway and Sweden, who also doubted the authenticity.  Flaws were pointed out in the language, the grammar, and even the lexicon used. The logistics of the route the Vikings would have traveled to even get that far has been debated. Norwegian and Swedish professionals contest the story.   The stone was even sent to Europe for examination, where it was further dismissed as a hoax. It later was on display at the Smithsonian Museum in New York City, where the story conversely gained much public support. Debates over its authenticity continue to this day. 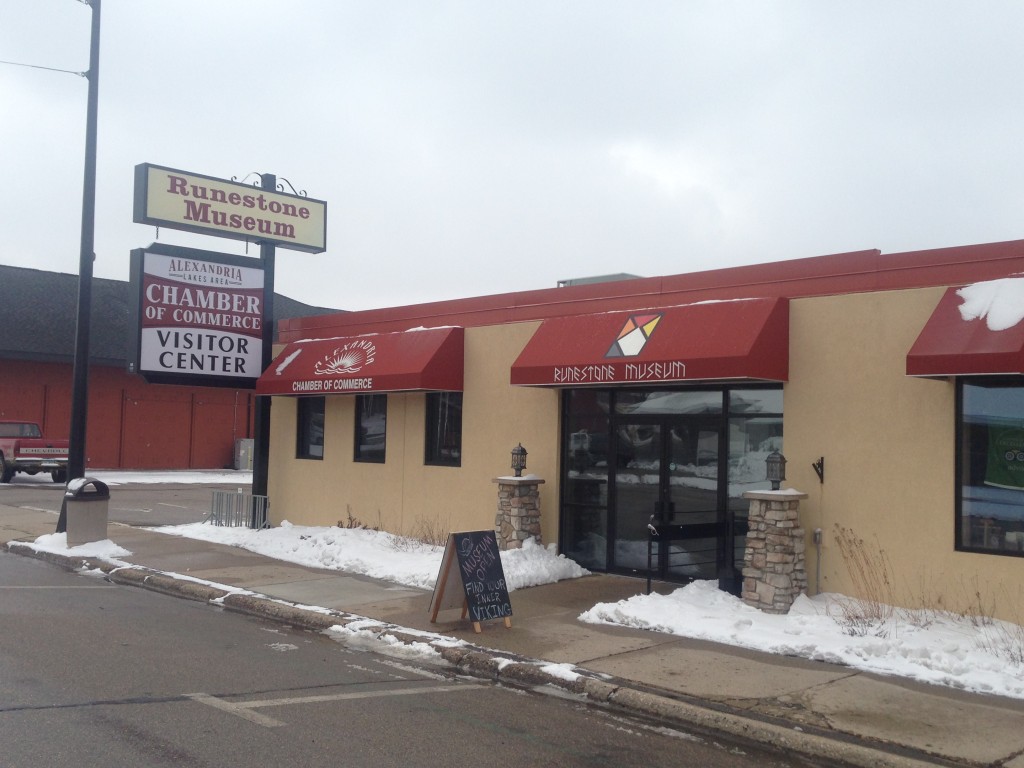 The Runestone can be seen in person at the Runestone Museum in Alexandria (above). Many historians and lovers-of-all-things-quirky make the mecca to the Runestone Museum, where even suggesting that the Runestone be inauthentic is a big no-no. Also at the musuem, you can even peruse other Viking memorabilia and local artifacts, see a replica of a Viking ship, and buy all kinds of runestone merch in the gift shop. After you’ve had your fill, head down the street a ways to see a 15′ tall statue of the Runestone (below). 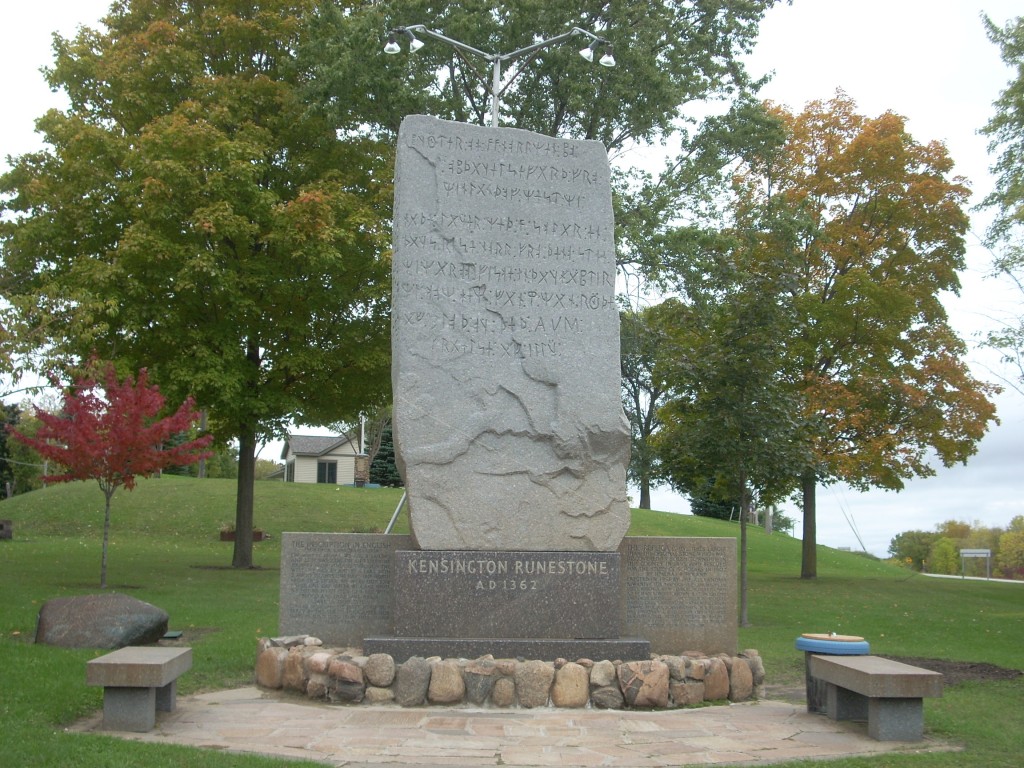 After all that, visitors often head about 15 minutes away from Alexandria out onto the rolling plains to the small town of Kensington. They take the Runestone seriously there.  Everything in Kensingston is named after the Runestone. The town might as well just be called Runestone. 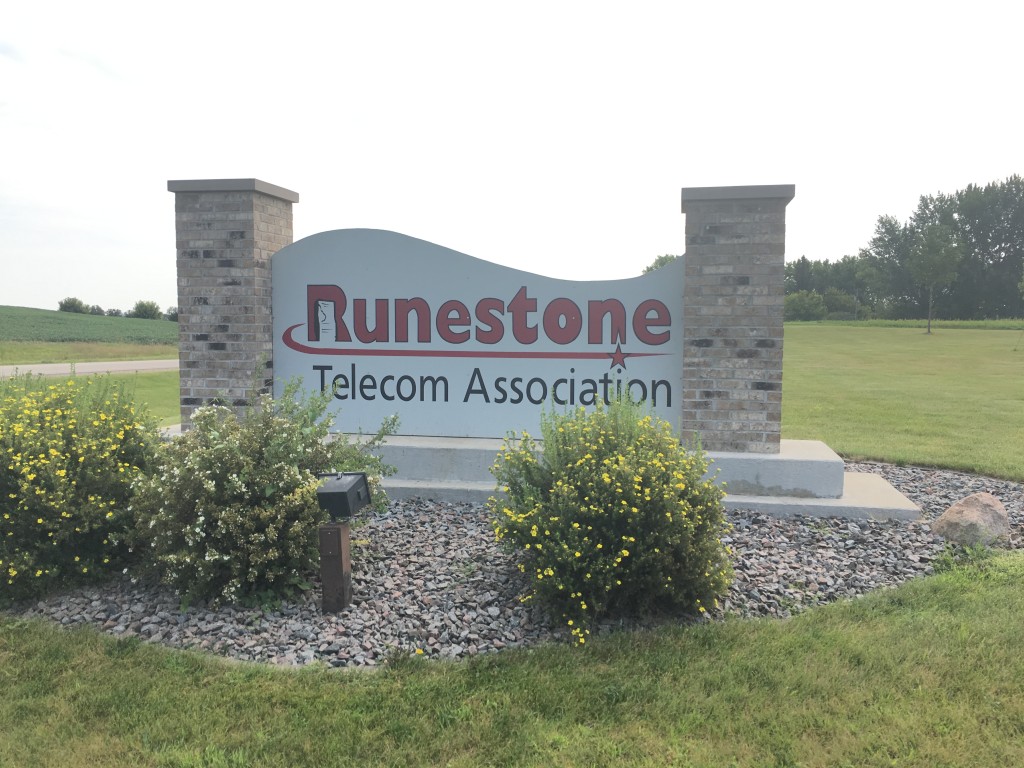 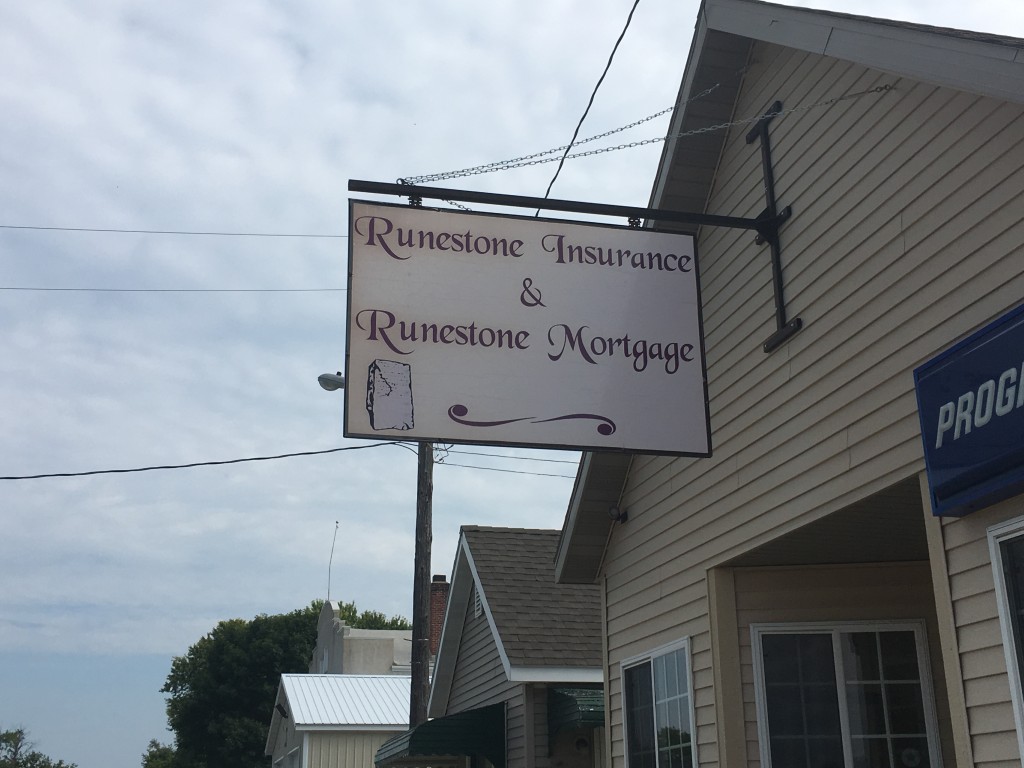 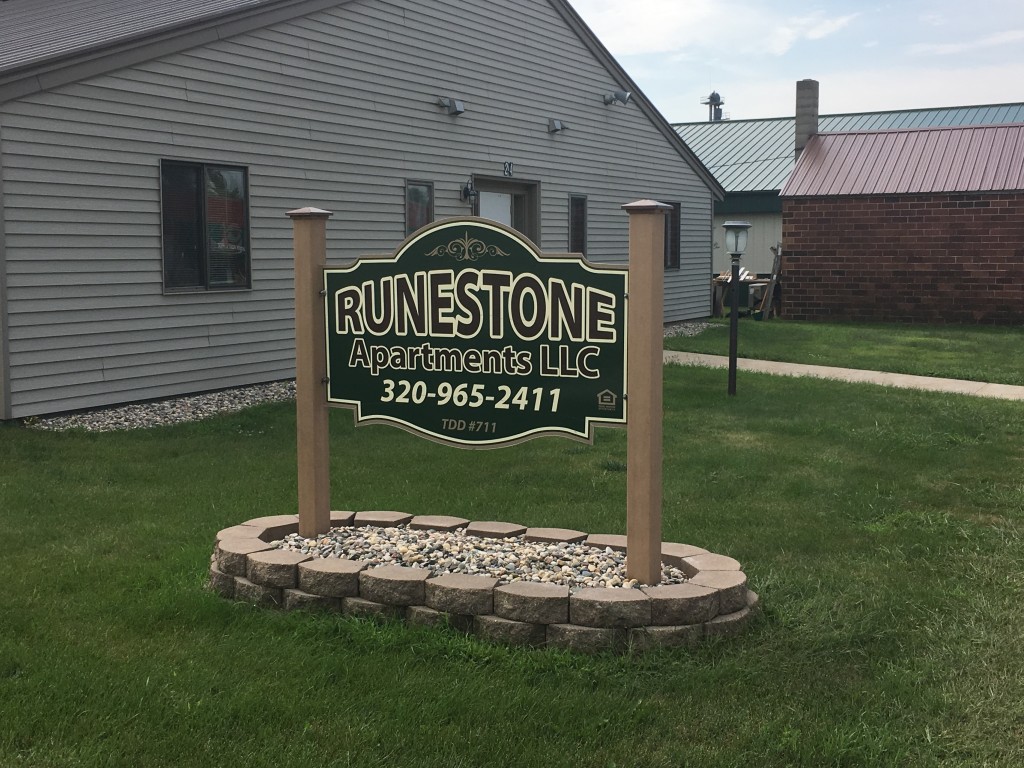 There you will find an entire county park dedicated to the Runestone Discovery Site, which features a small statue of the stone, the Ohman’s original farmhouse, picnic areas, and even a lookout over the swamp where the stone was allegedly found. 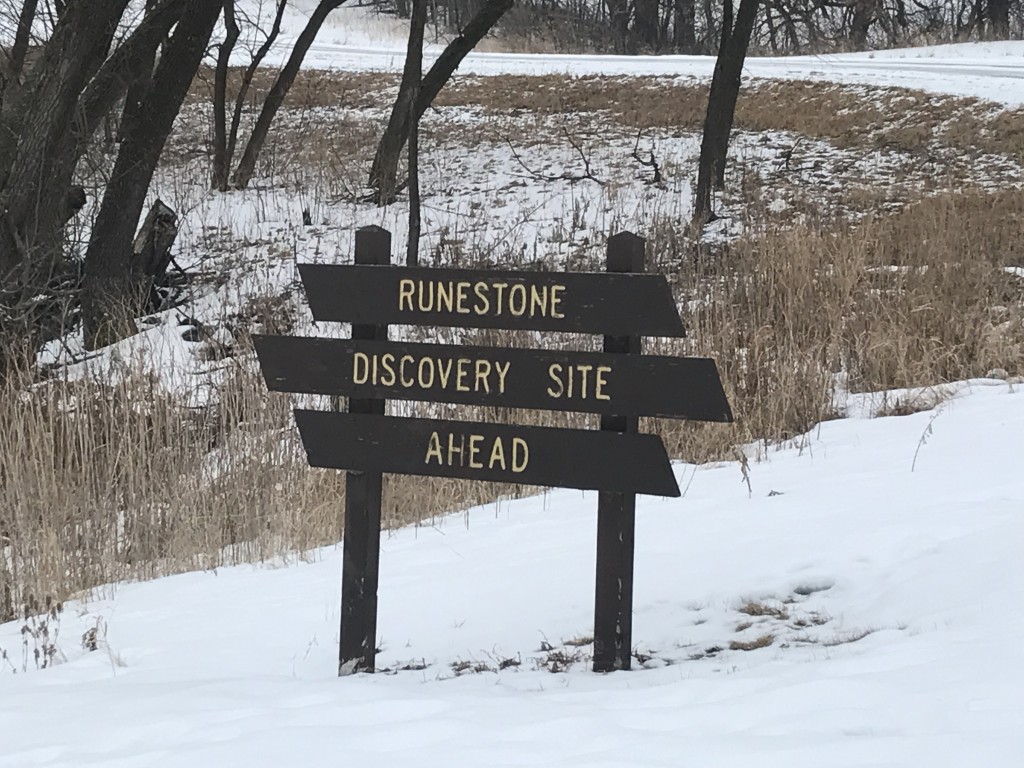 Is it real or a hoax?  Much like the Patterson-Gimlin Bigfoot evidence, the Loch Ness Monster, or even Minnesota’s own UFO encounter,  there probably is no way we’ll ever know the truth.  But that’s what the stuff of legends is made out of. If the Kensington Runestone is real, it turns everything we’ve ever known about the history of America on its ear.  Columbus Day, Plymouth Rock, even the name “America” all would be irrelevant, history would be completely rewritten.  If it’s a hoax, it’s an enduring one, one that has had a profound influence on Minnesota.  The Minnesota Vikings, for example.  Even Big Ole, a Viking statue across from the Runestone Musuem in Alexandria, has a shield proclaiming Minnesota as the Birthplace of America.  Deep down, we all want to believe it’s true. 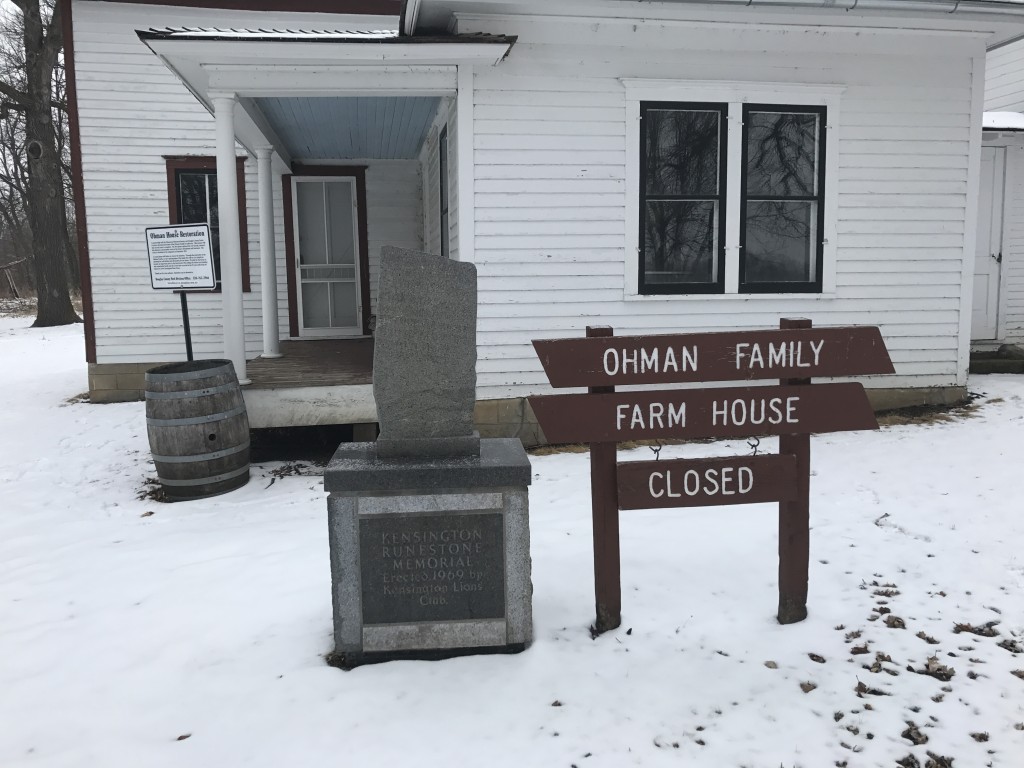 While in the area:  There is a lot to do around the Alexandria area, like the Depression-era Brandon City Hall building, have lunch at the always-awesome Zorbaz, or head just south of town to the quirky Pottyville, USA.

One thought on “Kensington Runestone, Part 2”