Every 2 years, we end up in Wisconsin Dells in June for a few days for a sporting event and vacation combination.  The last couple of trips we’ve spent taking in the sights and sounds of Wisconsin Dells, of which there are a lot.  If you’ve never been, it can be hard to understand the magnitude of such a place.  There are theme parks, waterparks, museums, boat/ski shows, haunted houses, and a plethora of other things I won’t get into today, all crammed into a scenic rivertown of about 6,000 people. 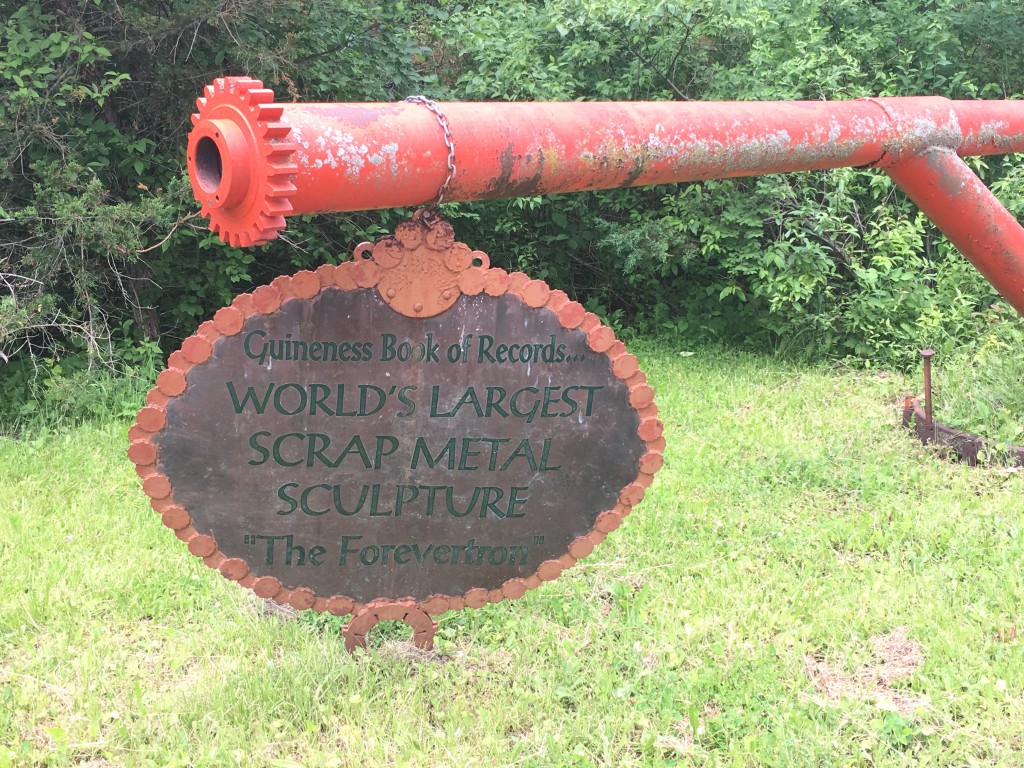 This time, we decided to shy away from the usual tourist stuff and venture outside of town to experience something truly fascinating, and boy were we in for a treat.  South of Wisconsin Dells about twenty minutes outside of the town of Baraboo, a sign positioned near a small dirt road off of a state highway advertises a place called Dr. Evermor’s Art Park and Studio.  You might miss the sign if you’re not looking, and the park is not visible from the road. You pull in and follow the road into the woods, and park your car at the gates. If the park is open (hours are posted on a small sign), grab your camera and prepare to have your mind completely blown. 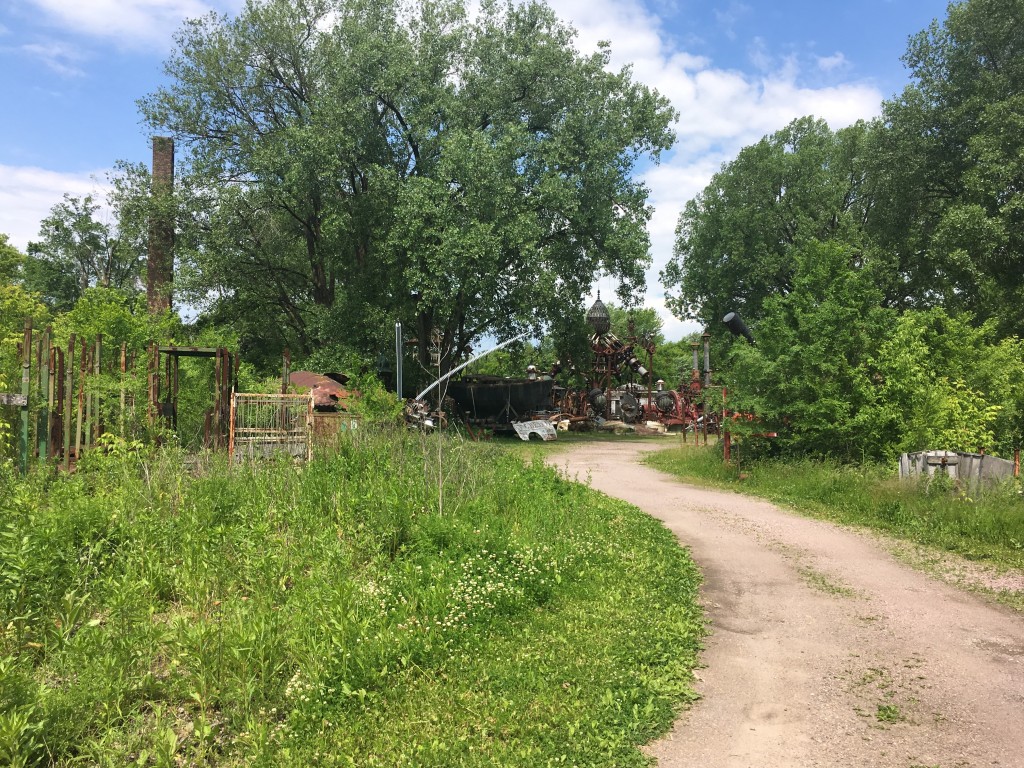 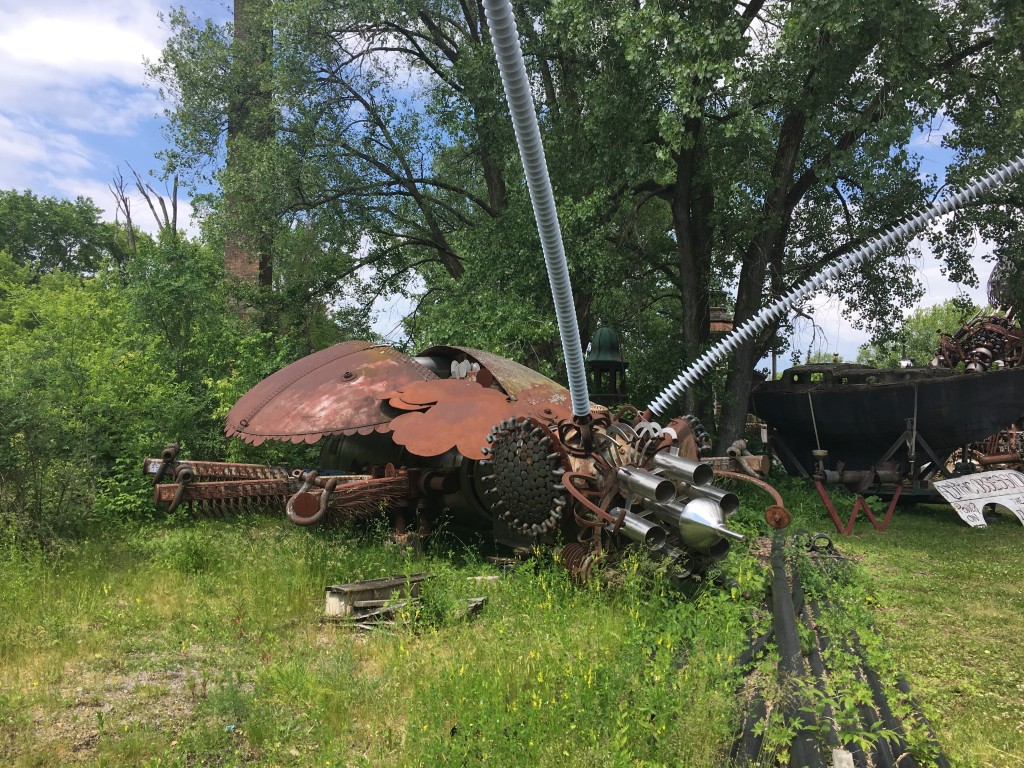 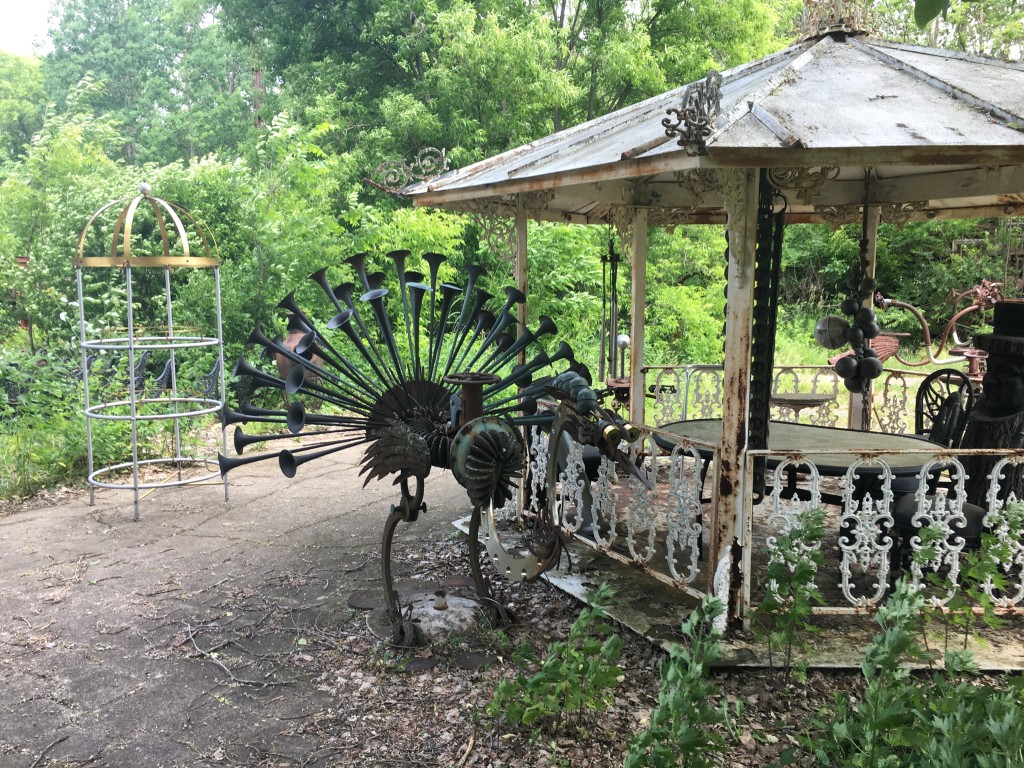 Walking in, you’ll see scrap metal piled and stacked everywhere.  There is no rhyme or reason, no method to the madness, no indications on what you’re seeing or why. You may think you are in a hoarders yard, which you technically are.  You are first greeted by a giant scrap metal bug. You meander further in and are transported to an otherworldly place.  The centerpiece of the sculpture park, the “Forevertron,” immediately grabs your attention and does not let go.  Then you look around and see acres and acres of welded figures, mechanical animals, rusty Victorian tea gazebos, cupolas and old cars, things you recognize and things you don’t. 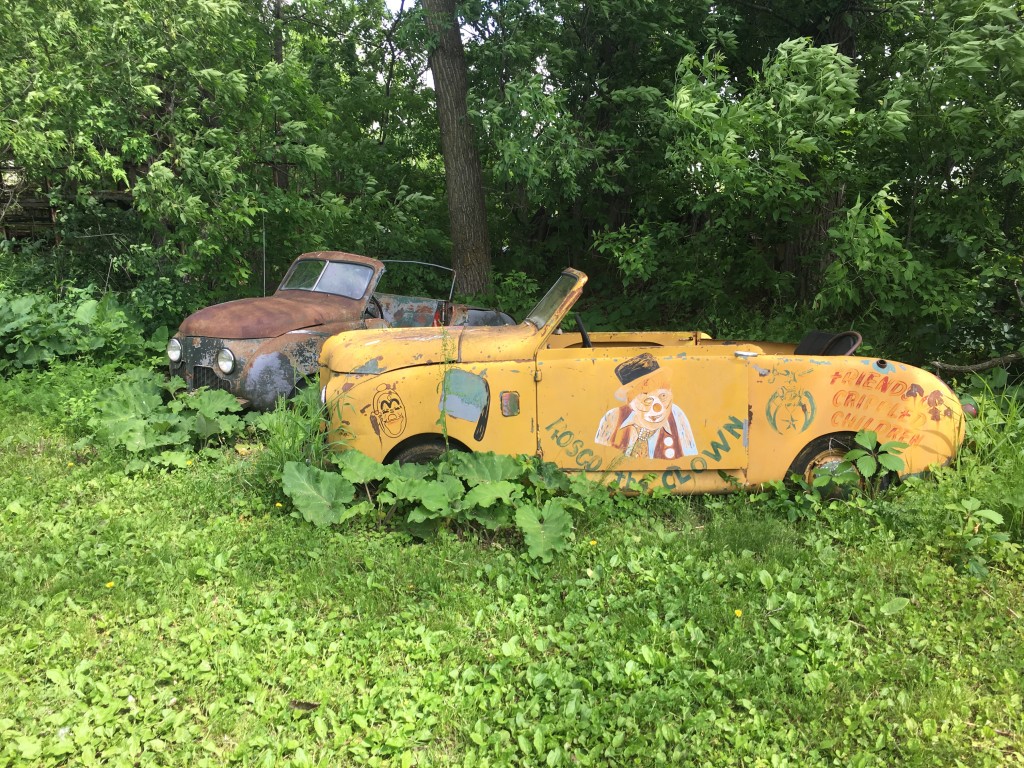 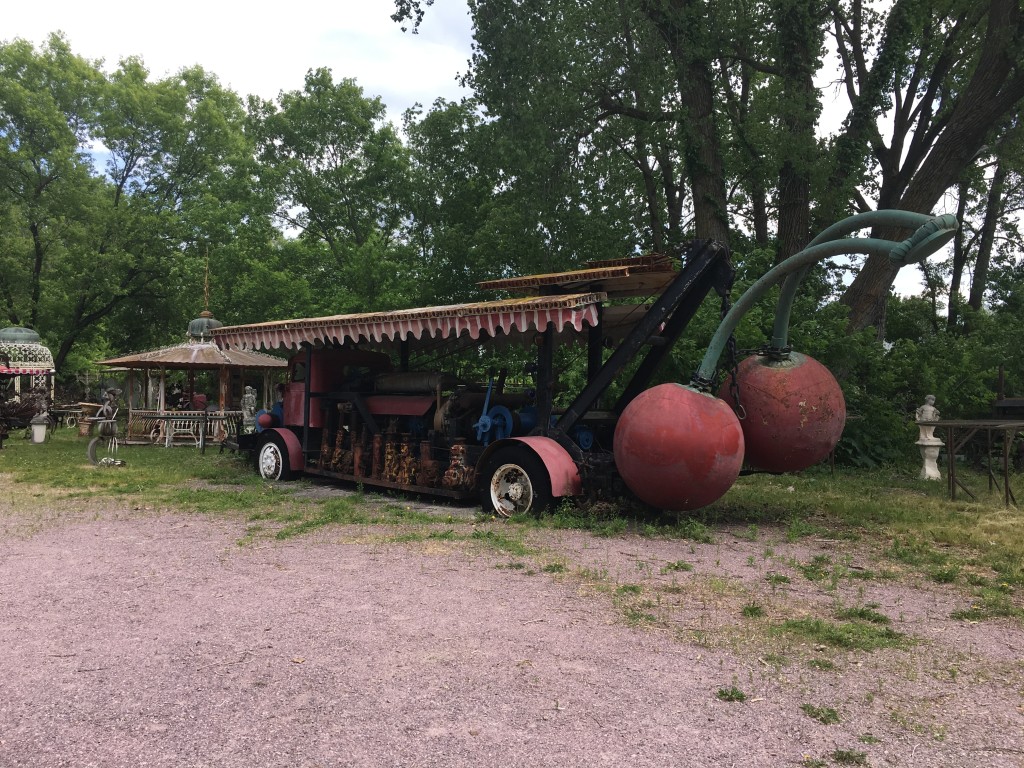 Paths wind through clearings in trees where more scrap metal art awaits.  Scenes of welded-together metal creatures play out alongside old buses, phone booths, fair rides, and more and more figures built from rusty instruments, farm equipment, car and tractor parts, and everything else under the sun.  There are clowns, bugs, birds, and unidentifiable metalloids.  Moseying further into the park, a 70-piece “bird band” is set up, made from old horns, saxophones, tubas, and other instruments, complete with a conductor and audience, all created from scrap.  A thirty-foot tall cello bird stands among the band. 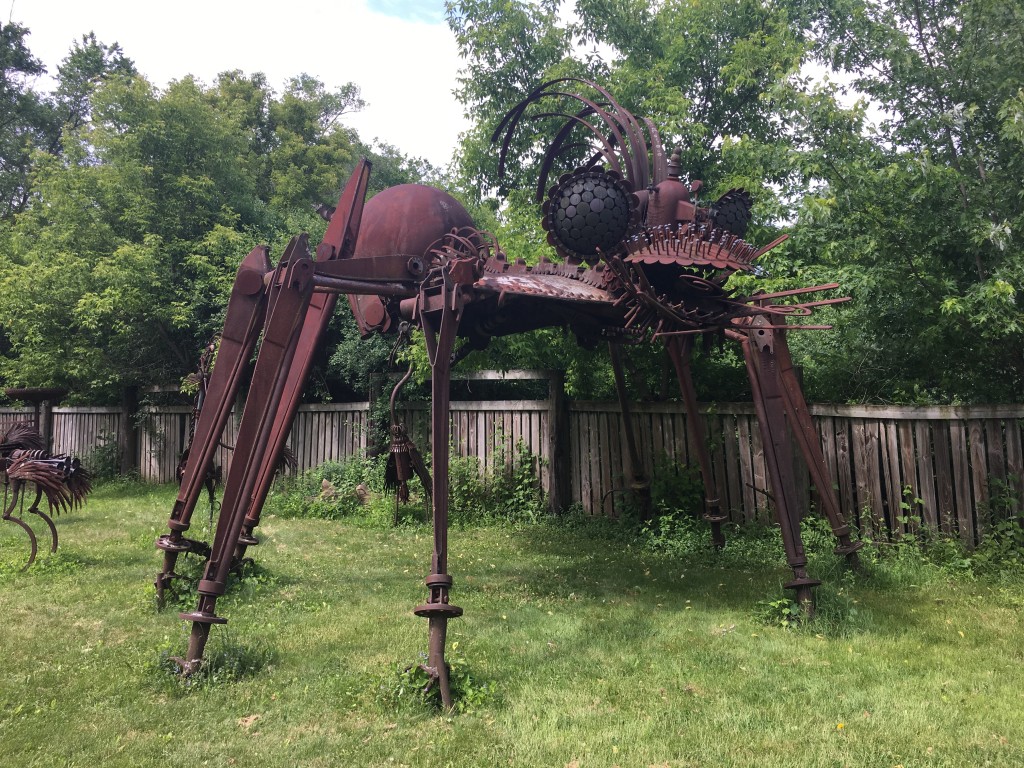 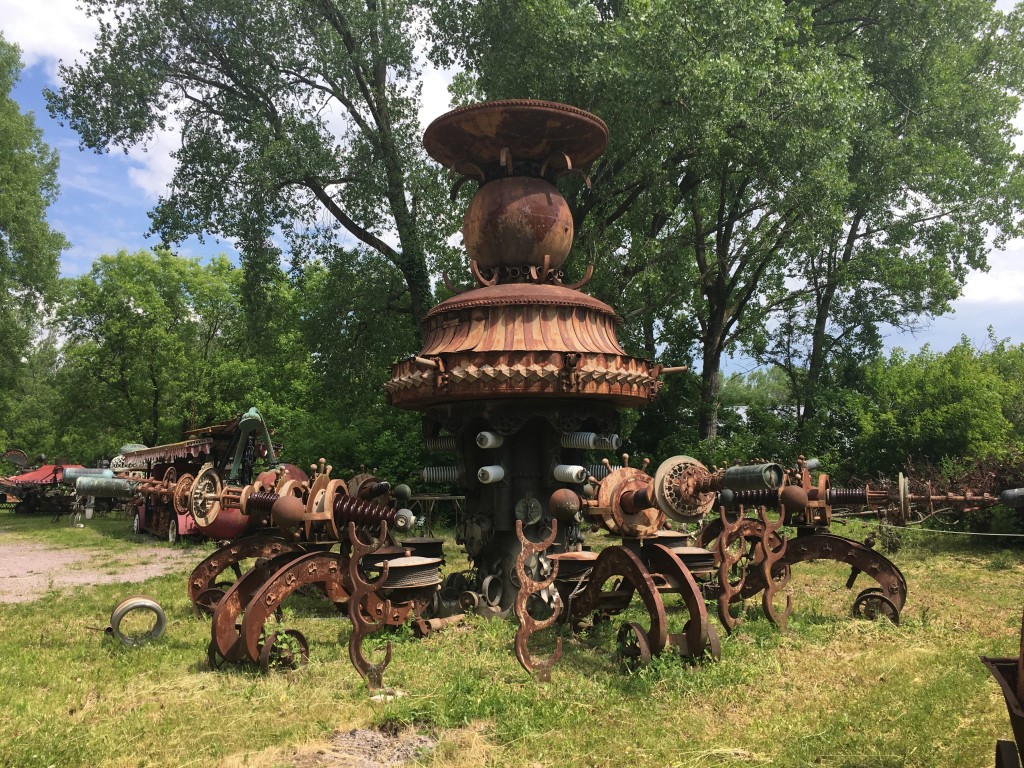 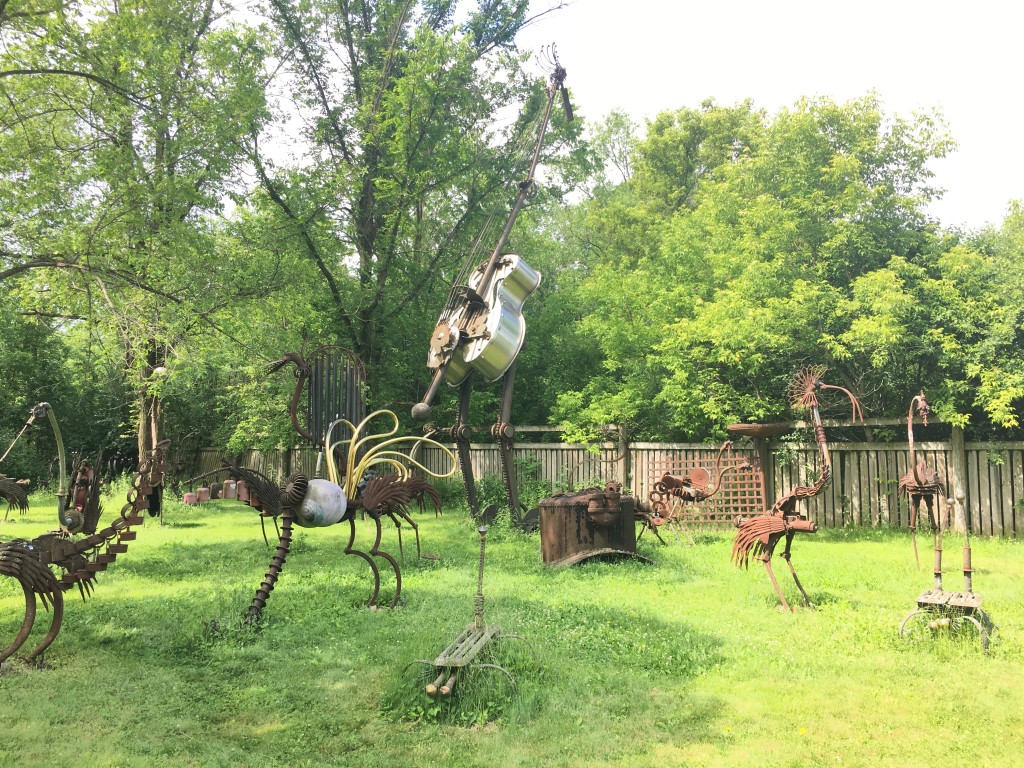 And then there’s the “Forevertron.”  This Guiness-certified World’s Largest Scrap Metal Sculpture is something out of a sci-fi/steampunk fairy tale. It’s huge, elaborate, and detailed. It looks like a space station, which it partly is.  It was built in the 1980’s by Dr. Evermor, aka Tom Every, who ran a successful wrecking ball/demolition company in the decades prior.  He couldn’t stand to see all that perfectly good scrap go to waste, so he set off collecting it.  He bought and collected more and more and more until he started to create things with it. He had no plans or formal training, which makes it all the more impressive. 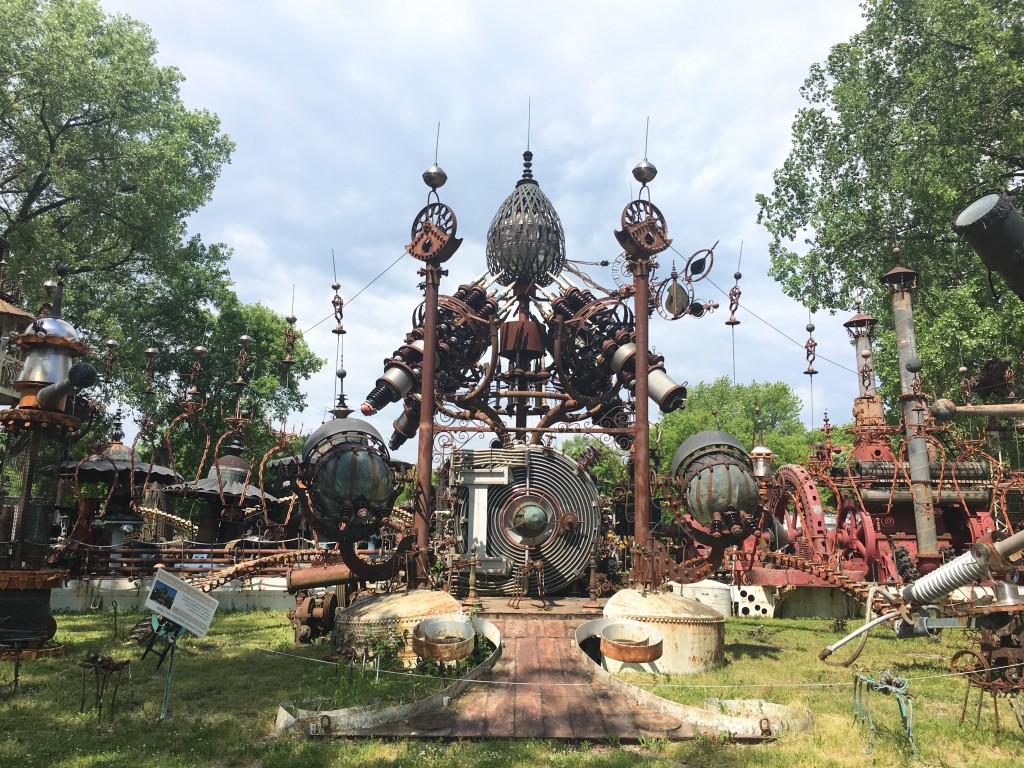 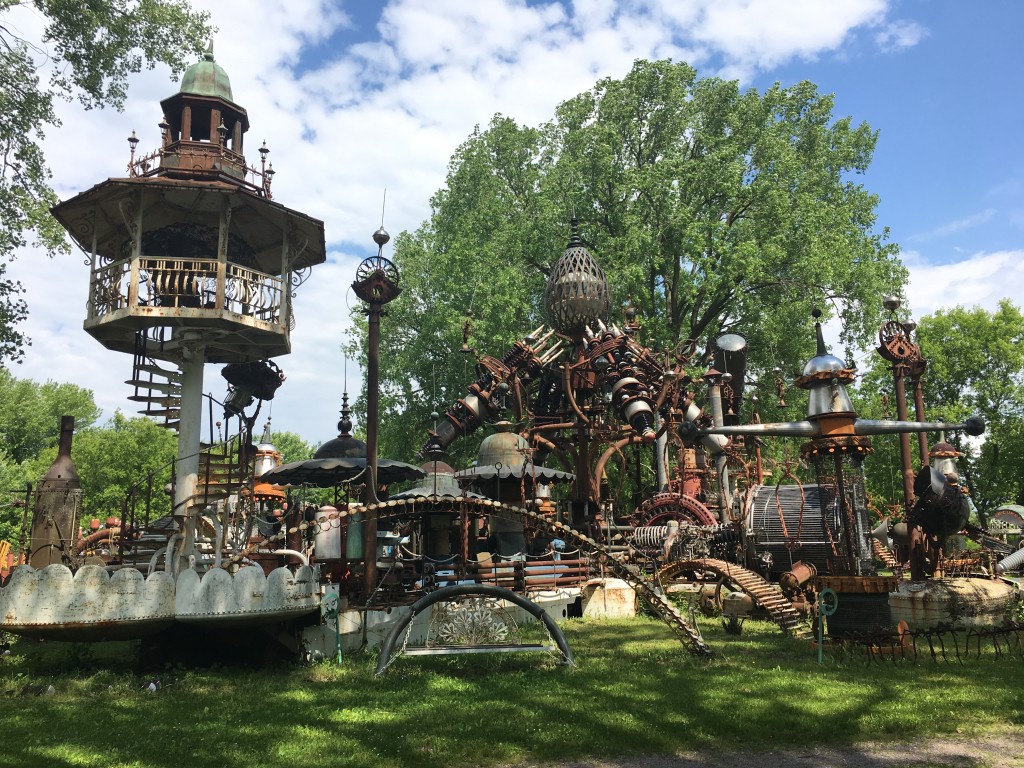 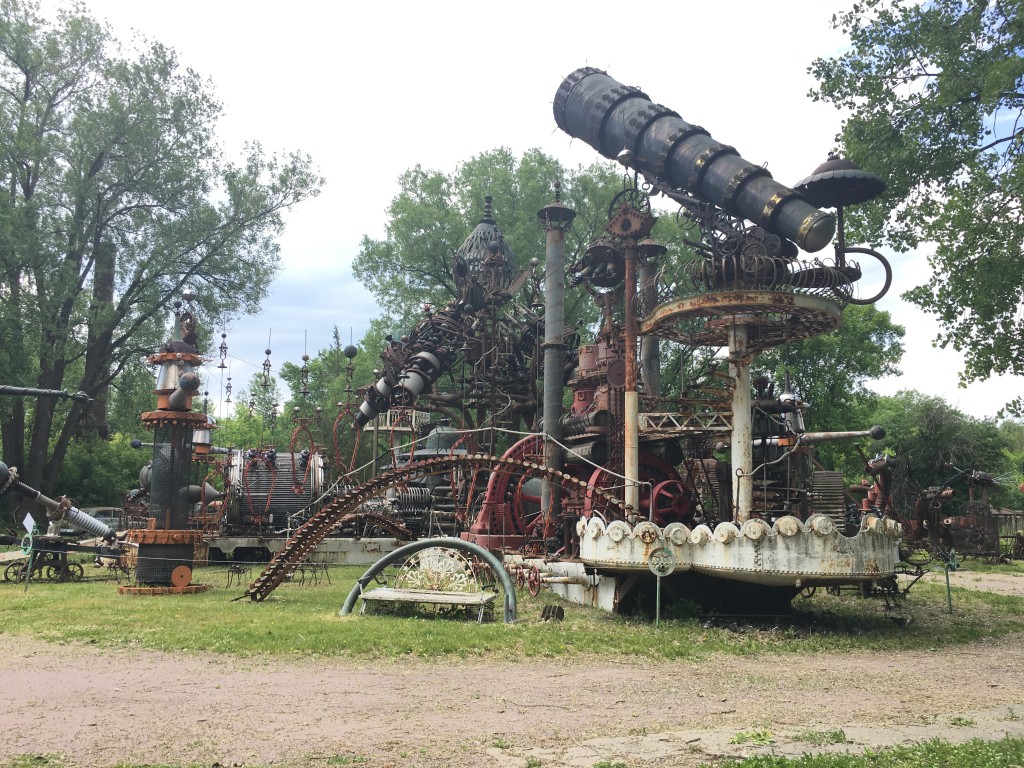 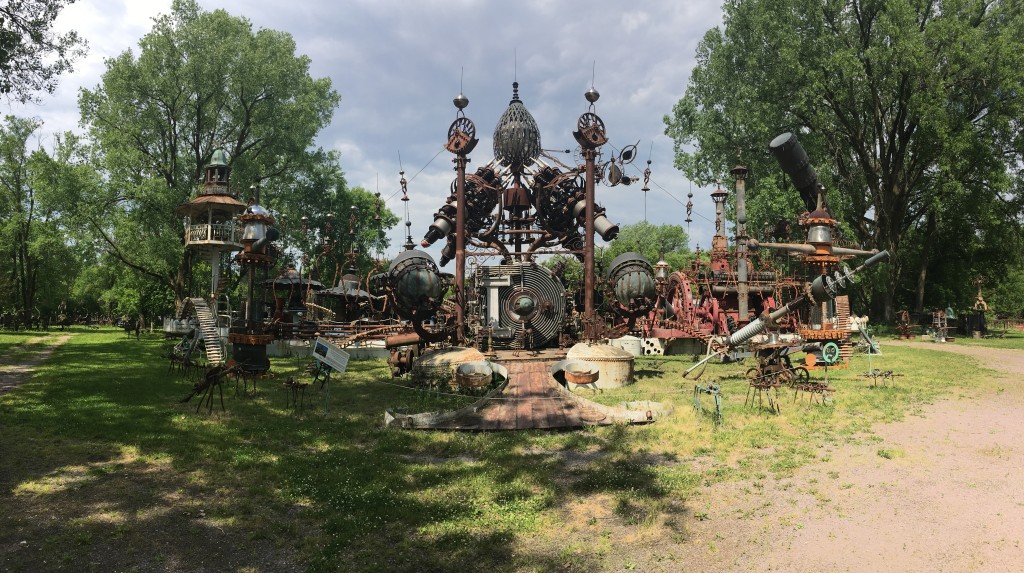 And impressive it is.  The Forevertron features giant transformers, two Thomas Edison “dynamos” from the 1880’s, lightning rods, components from old power plants and ammunition plants, parts from cargo ships, railroad engines, and a decontamination chamber from the Apollo 11 spacecraft, believe it or not. A mad scientist indeed, he built it all by hand, welding and bolting and building it piece by piece, over a span of three years. On the left is an observation deck gazebo, on the right is a giant telescope. And in the center is an egg capsule spacecraft, sitting atop four thrusters, for when the day comes for Evermor to blast off into the ether. 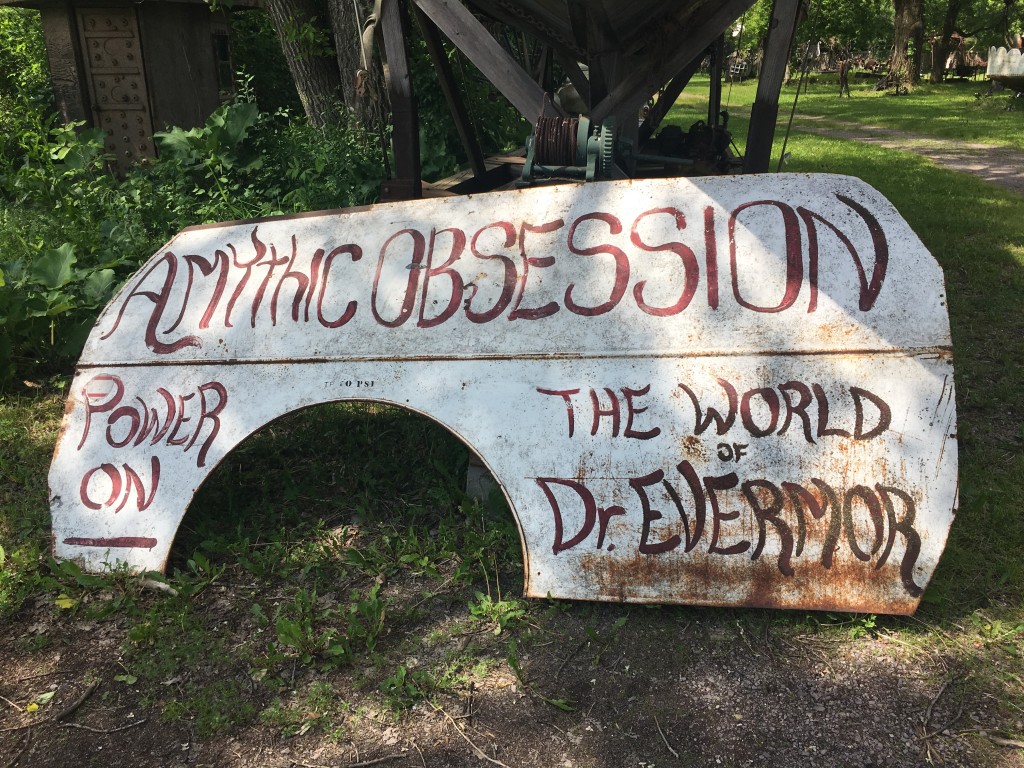 Although Evermor is now in a nearby assisted-living facility, his muse Lady Eleanor continues to carry on his legacy by adding to the sculpture park and even bringing in guest artists to add to the cacophony of art. She may even be there during your visit.  The grounds are free to experience, and some items are even for sale. It has been featured on Discovery’s Beyond Bizarre, History’s American Pickers, and many other travel shows and news stories. There are talks of moving it all closer to the Dells, but for now, it’s perfect right where it’s at, in a clearing in the Wisconsin woods, off the beaten path and hiding in plain sight.  Minnesota may have some crazy stuff, but Wisconsin has us beat, hands down.

While in the area:  Baraboo is home to the Ringling Brothers Circus, where you’ll find the original theatre, the historic mansions of each brother, the Circus World Museum and the Clown Museum.  Devils Lake State Park is nearby as well for some amazing hiking, or check out “Man Mound,” a rare human-shaped effigy mound created sometime between 700-1200 AD by the Late Woodland hunter-gatherers.