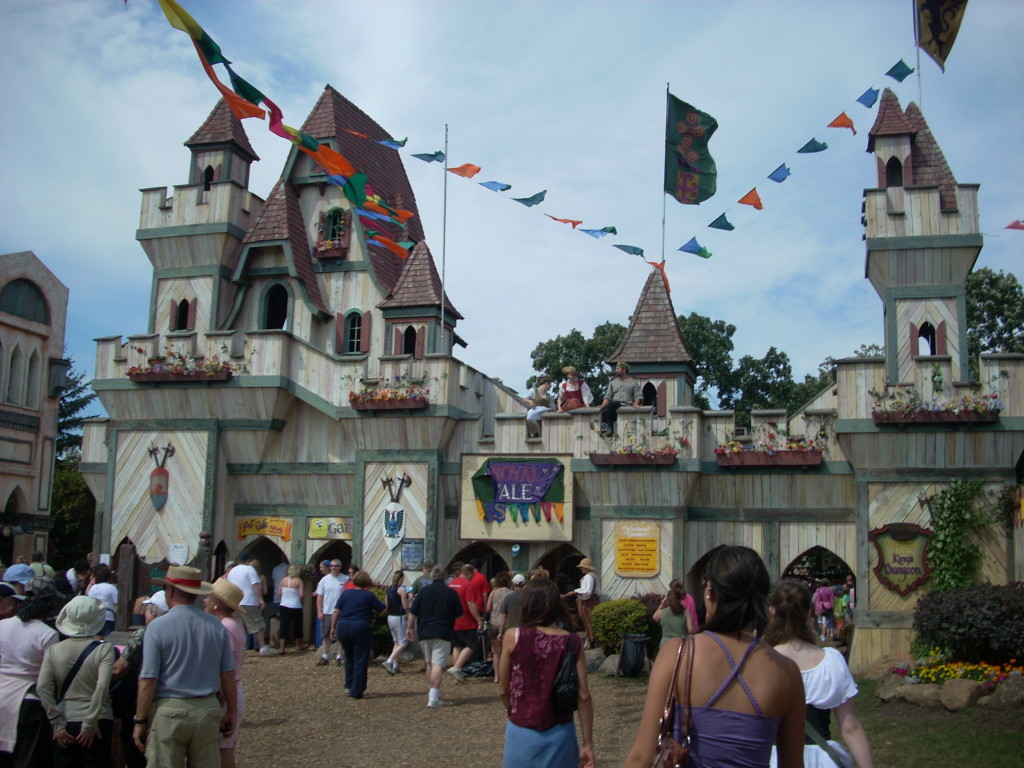 It’s one of the biggest and oldest Renaissance Festivals in the United States, and it runs every weekend from Mid-August through the end of September.  It’s a people-watching extravangaza, a whimsical and enchanted place, where the weirdest of the weird get to geek out, judgement-free.  Much like the Minnesota State Fair, the Renaissance Festival brings in all walks of life to experience something like nowhere else.  So what’s it like? Let’s find out! 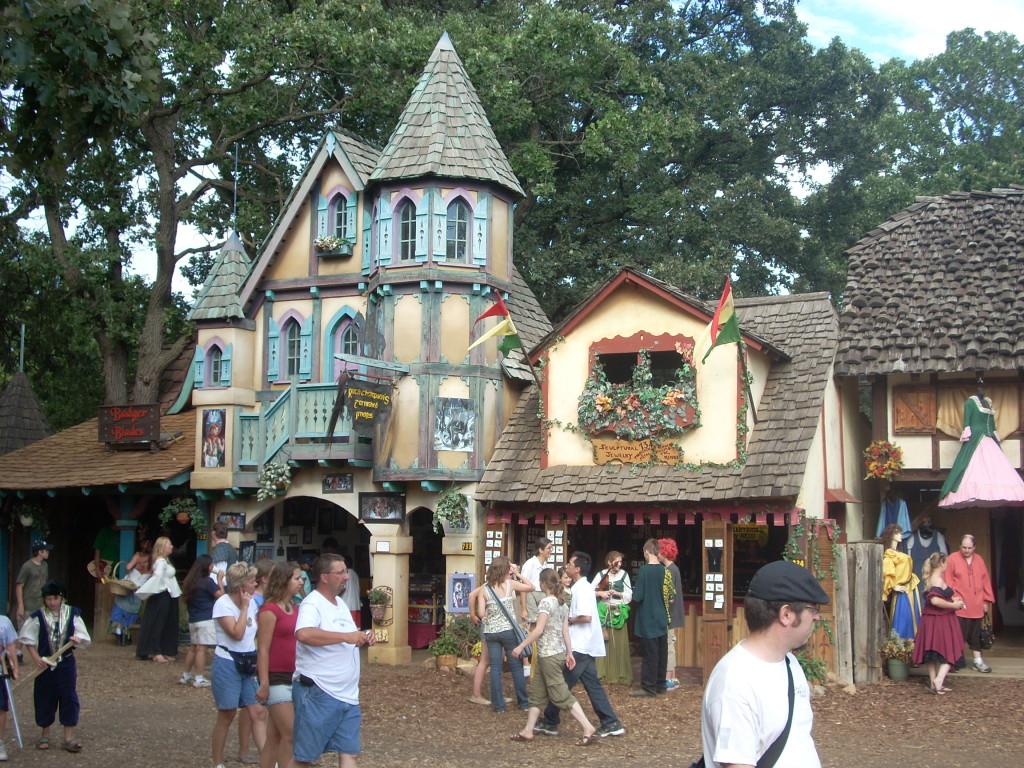 The Festival is set in its own little world near a sandstone mine on the outskirts of Shakopee, a southwestern suburb of Minneapolis. You exit highway 169 on a dirt road and park in a field.  As you make your way toward the gates, you suddenly are transported back to 1600’s England, replete with architecture straight out of children’s storybook.  Once you’re in the gates, you couldn’t feel further away from reality. 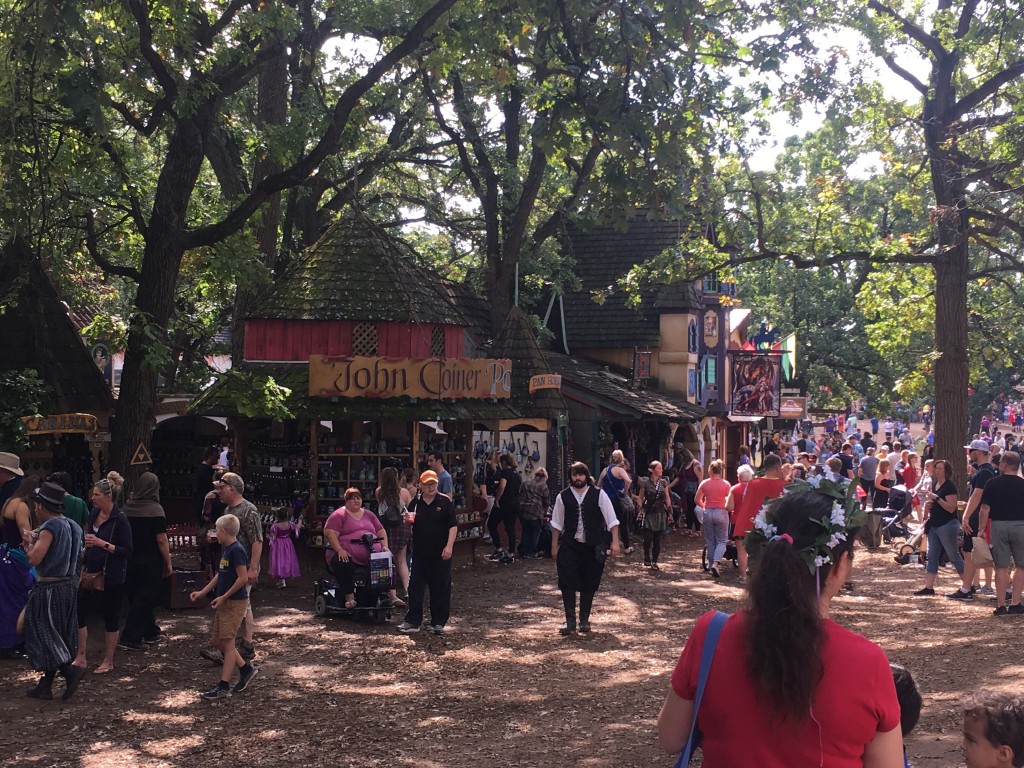 There are a lot of things to do there. It’s a big, big place. You can spend an entire day taking in the sights and sounds. Workers and guests alike dress as characters from literally anything historic; you’ll see paupers and jesters, knights and wenches, wizards and sorcerers, steampunk, pirates, vikings, and royalty.  The weirder, the better. It’s like Comic-Con, except from the Renaissance era.  You will likely be interacted with by costumed jokers, so go along with it.  It’s part of the gig.

You start making your way around the perimeter, perusing dozens of vendors selling their wares in shops that look like a quaint, English fairytale town. It feels like you could spend the whole day exploring them and not see it all.  You can buy things like old timey costumes, leather mugs, woodcarved decor, steampunk gear, art, fountains, windchimes, swords and daggers, gnome homes and yard decorations, pottery, stones, jewelry, foods, drinks, and countless other things. 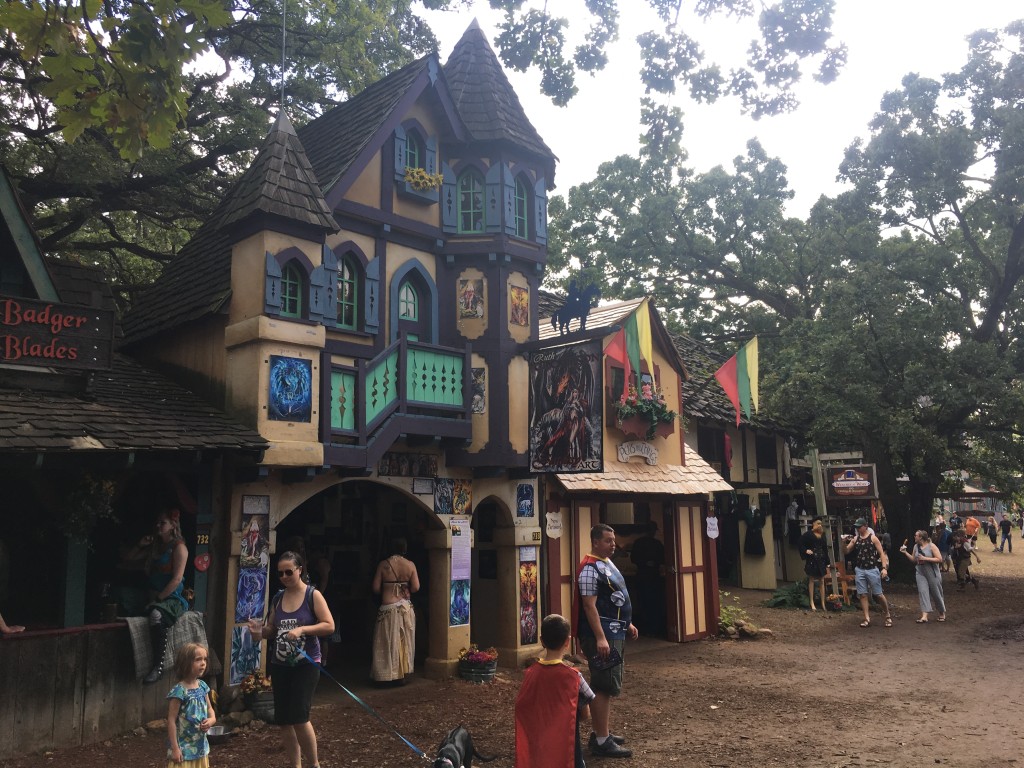 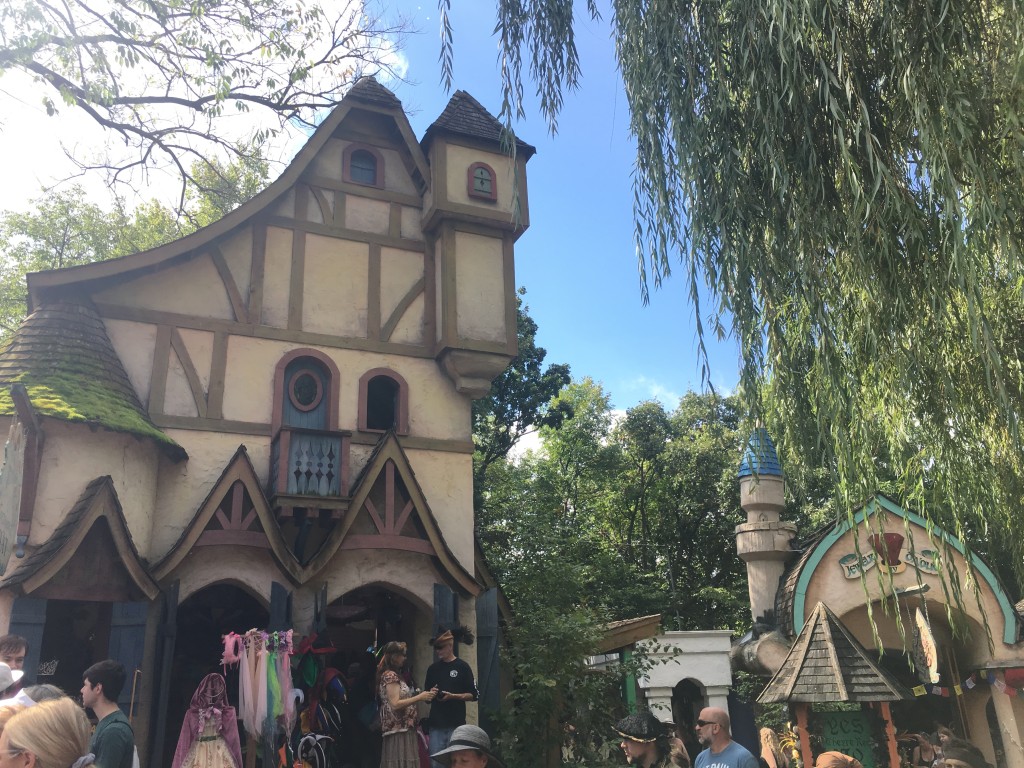 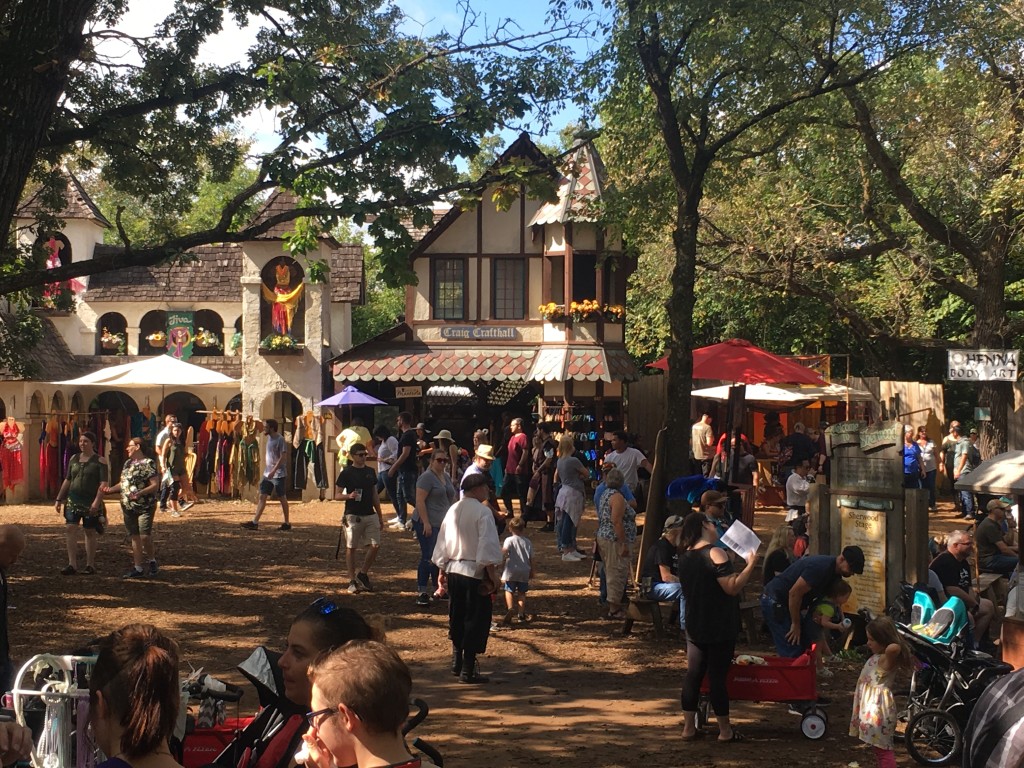 You meander the grounds, not sure where to look next.  You can easily get turned around inside of the small city, until you round the next corner and and experience something new. At some point, you will mosey down through a portal into a hollow of oak trees called the “Fairy Wing Forest,” complete with gnome and fairy homes, nymphs, pixies, and water features. This was one of our favorite things there, due to the pure whimsy and creativity.  Costumed fairies are found here, posing with youngsters, and countless little scenes are hidden and scattered throughout the woods. 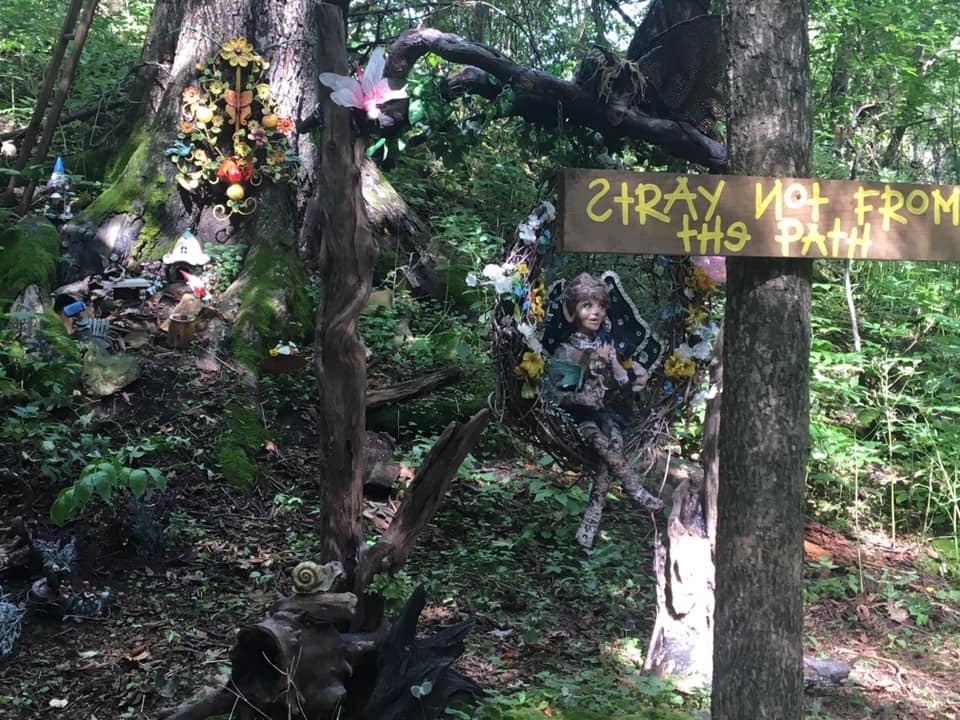 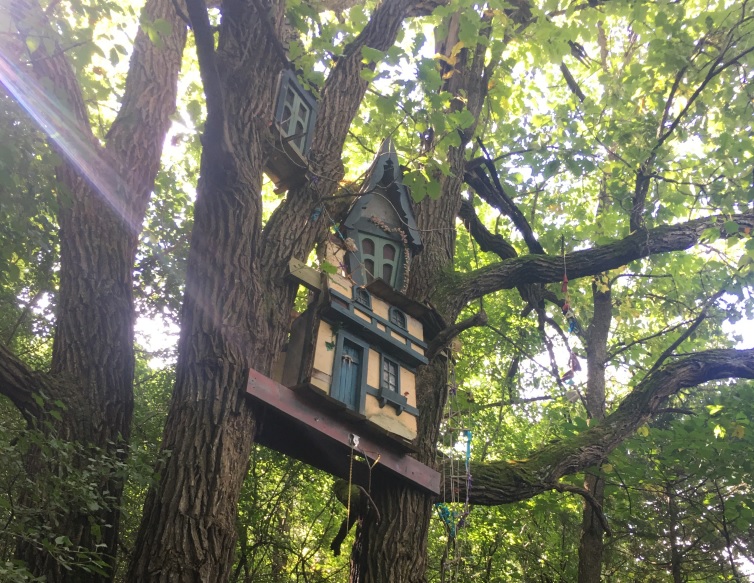 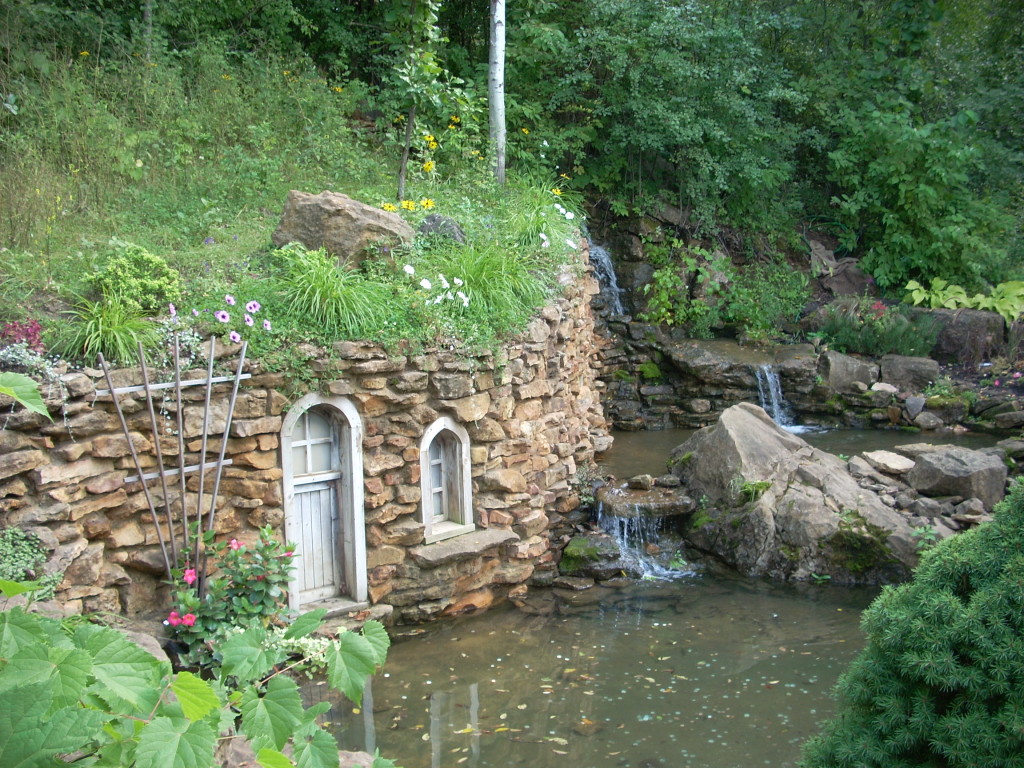 You venture through Mermaid Cove, where costumed mermaids interact with gleeful youngsters. There was a pretty big line to get into this one, which we found was mostly due to parents taking pictures of their youngins with the mermaids. 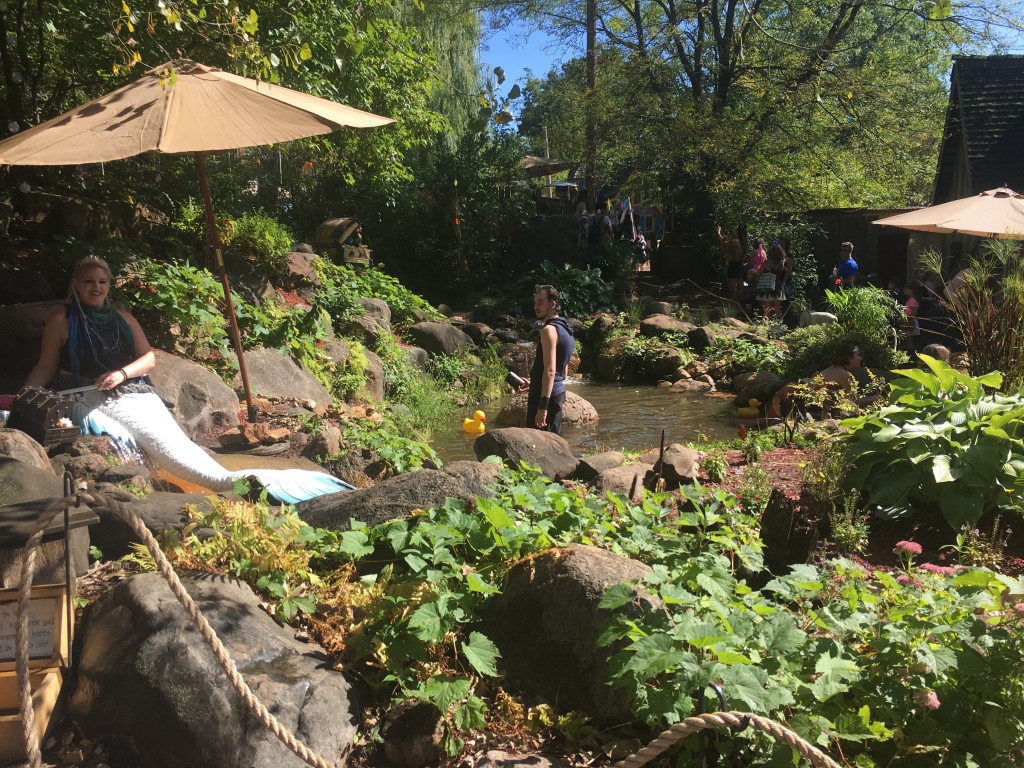 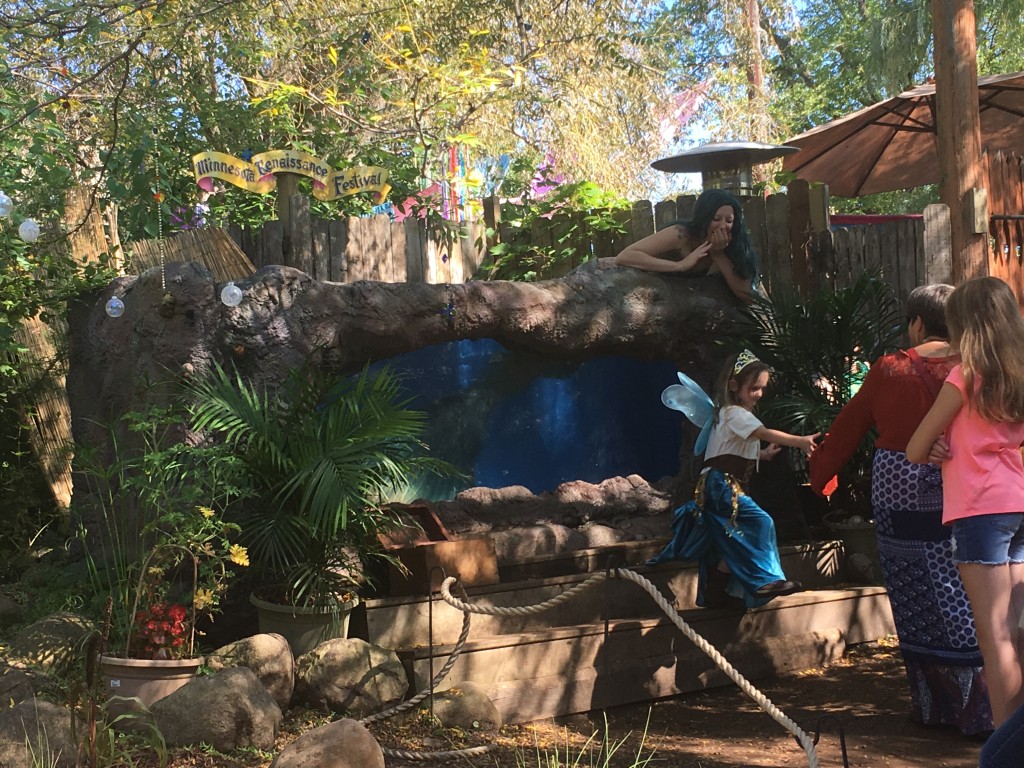 Meander further in and meet Twig the Fairy (although we didn’t see her on our visit), chuckle as you throw tomatoes at a jester with his head sticking out of a fence (nobody is safe from his heckling, believe me), check out the King’s Dungeon to see a gallery of medieval torture devices,  throw some axes at a wooden slab, watch a jousting event, try your hand at fencing, ride on elephants, take in a comedy show, sip on local beer, mead, and wine, or sit on the Throne of Swords.  There was even a wedding in progress the day we were there. 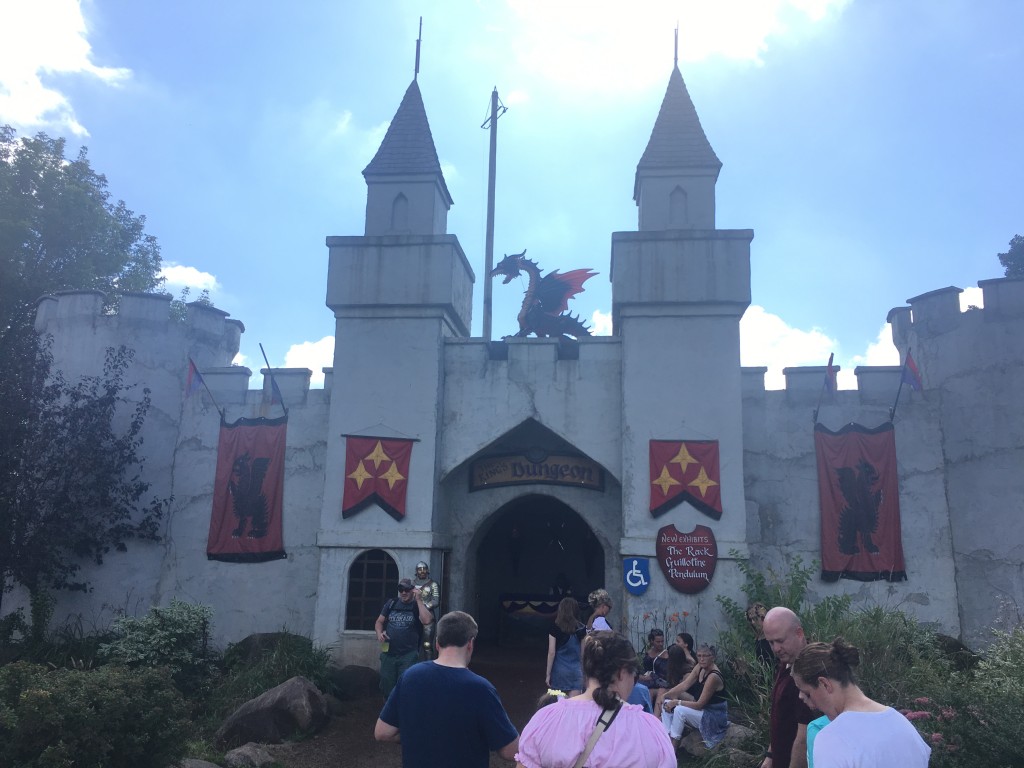 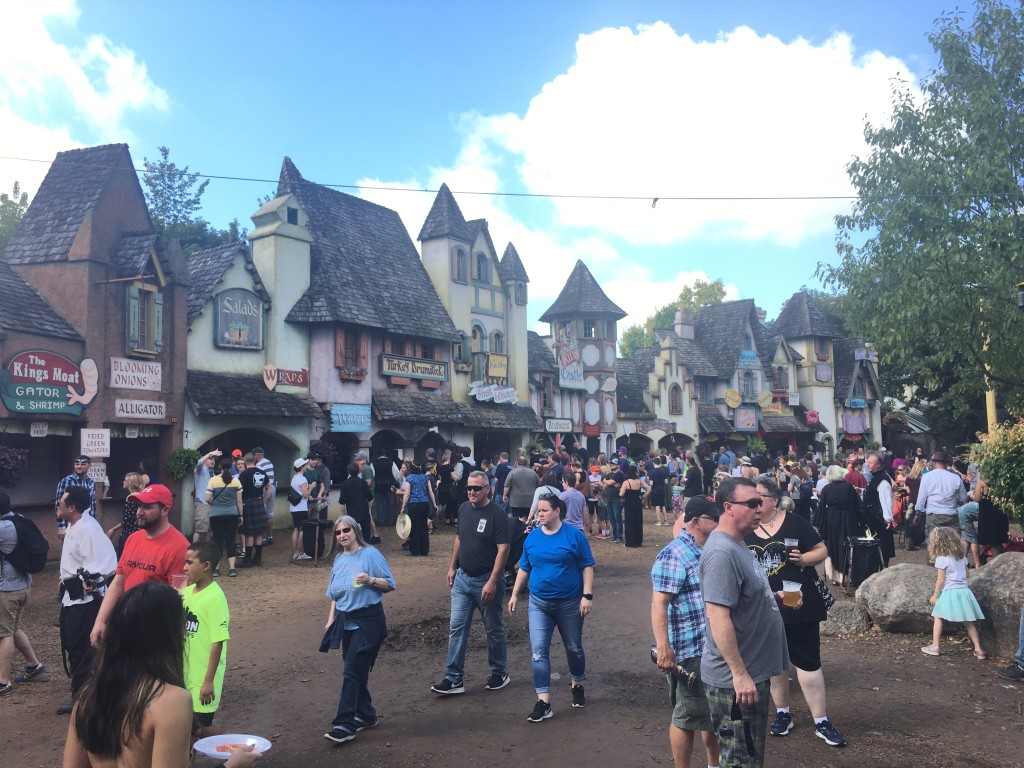 The interactive comedy shows are a big part of the day.  Plan to take a few in.  They go all day at different places around the festival, and they can be a great place to rest your feet for a spell – after all, you’ll do a lot of walking. Some of the more popular shows are legendary comedy duo Puke & Snot; the Tortuga Twins; Robin Hood and the Merry Men; and the Danger Committee.  You’ll also see many smaller performers and musicians around the grounds as you’d expect. Check out the life-size chessboard, the folk dancing shows, sword-swallowers, jugglers,  fire-breathers, or have your head put in the stockades while costumed town criers recite your “crimes.” 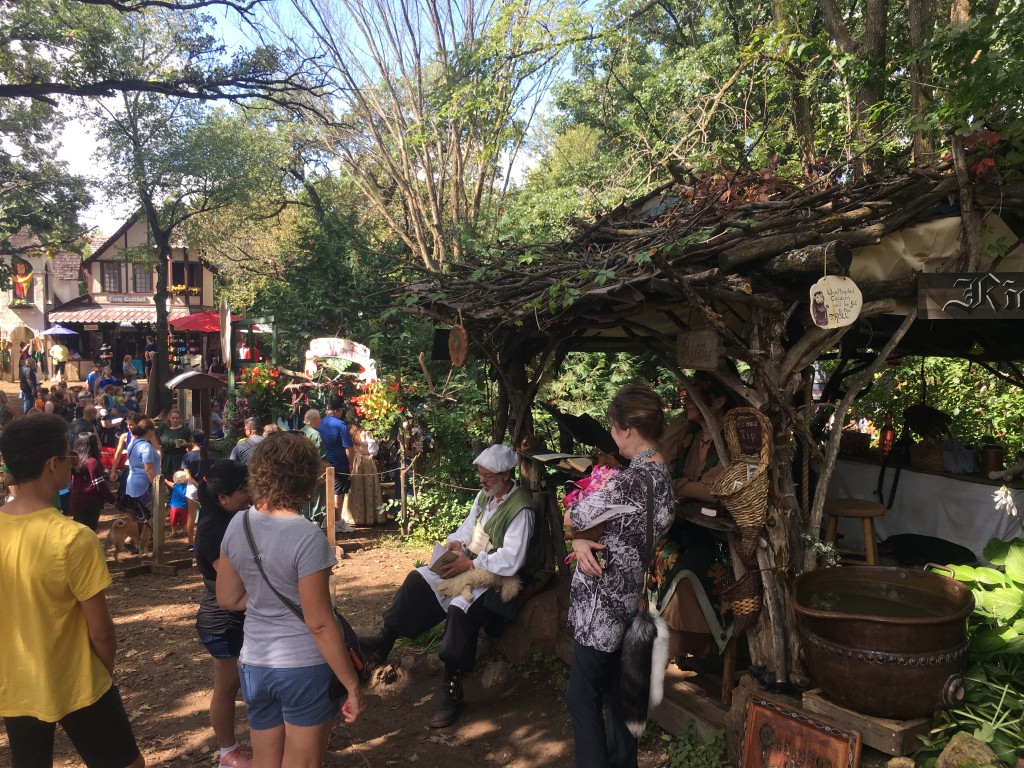 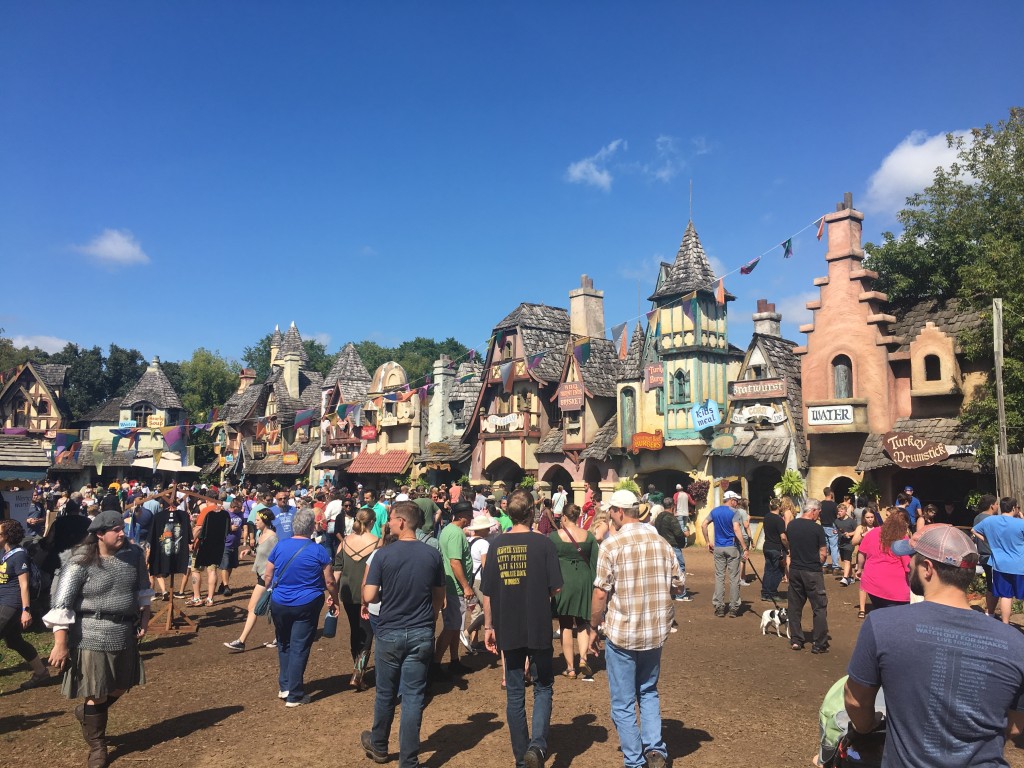 It’s hard to say what the biggest draw is here.  It could be the characters, the scenery, the quirky things you just won’t find anywhere else.  Everyone should experience this place at least once.  It may end up moving locations (the lease is up in 2020), but it will likely stay somewhere around the Twin Cities. Check out their website for the different themes for each weekend. Dress up however the hell you want, bring the family, brush up on your olde English dialect, fill your goblet, gnaw on a turkey leg, and party like it’s 1699. 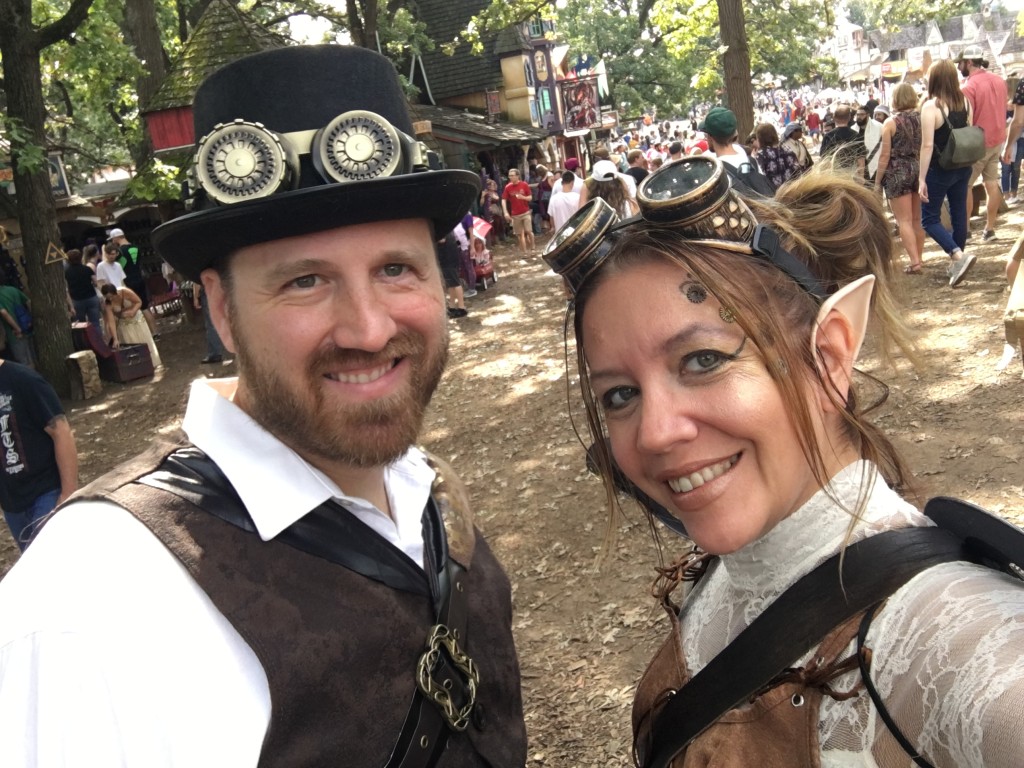 While in the area: Shakopee is also home to Valleyfair and Canterbury Downs (horse racing), and Mystic Lake Casino is nearby too. Travel to the area around Labor Day and hit up the State Fair too and really pack it in!