We’ve covered Paul Bunyan plenty of times before at HighwayHighlights. After all,  Minnesota is the official home of the bearded lumberjack. Sure, other states may attempt to make the claim that they’re the home of the legendary logger; don’t believe the hype. No state has more stories, statues or artifacts than right here in Minnesota.  This week we will go over each and every one of the likenesses of Paul Bunyan and Babe The Blue Ox found in our great state, in the first installment of the Minnesota Paul Bunyan Tour!

Without a doubt, the most iconic statues of Bunyan and his Ox in the state are found in Bemidji.  Originally built for a Winter Carnival in Bemidji back in 1937, the statues were later permanently placed right on the lakeshore near downtown Bemidji.  Allegedly the second-most photographed statues in the United States after Mt. Rushmore, Bemidji’s Paul and Babe stand the test of time, drawing in thousands of tourists each year. They have been listed on the National Register of Historic Places since 1988. 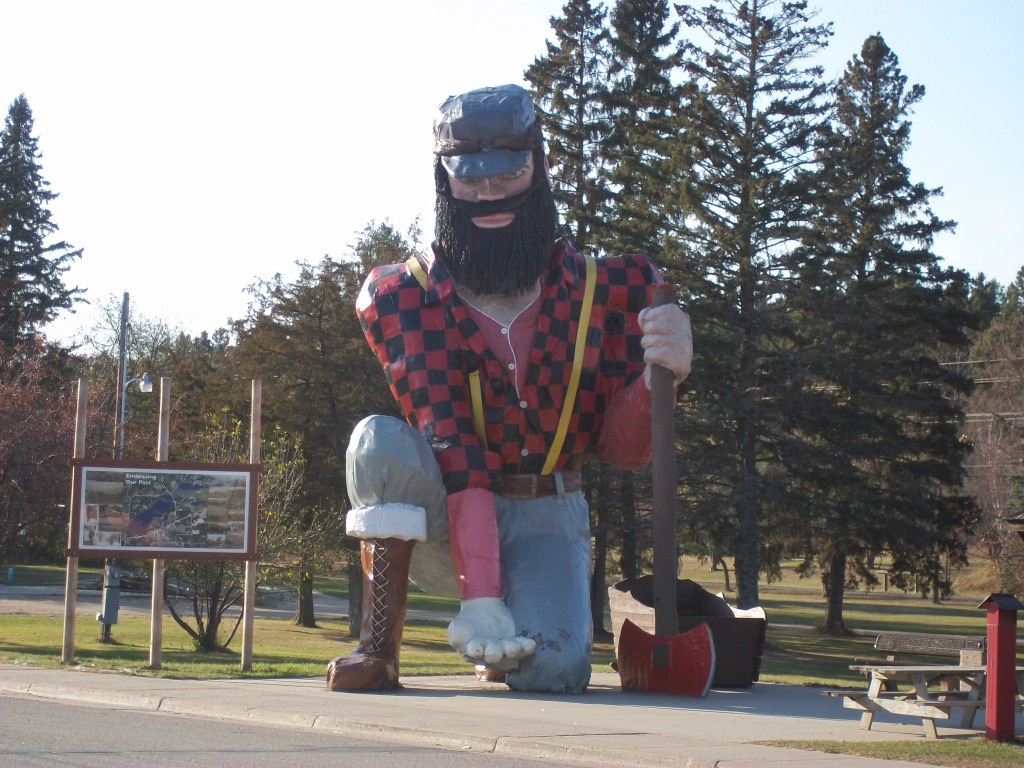 The next Bunyan on our list is the extraordinarily popular Kneeling Paul Bunyan in Akeley, MN.  The photo op here is irresistible, Paul’s outstretched hand is perfectly positioned for tourists to climb in and sit.  Behind this Bunyan is a Paul Bunyan museum, Paul’s crib, and a pavilion for passerby’s to have a picnic on their way to wherever it is they’re headed. 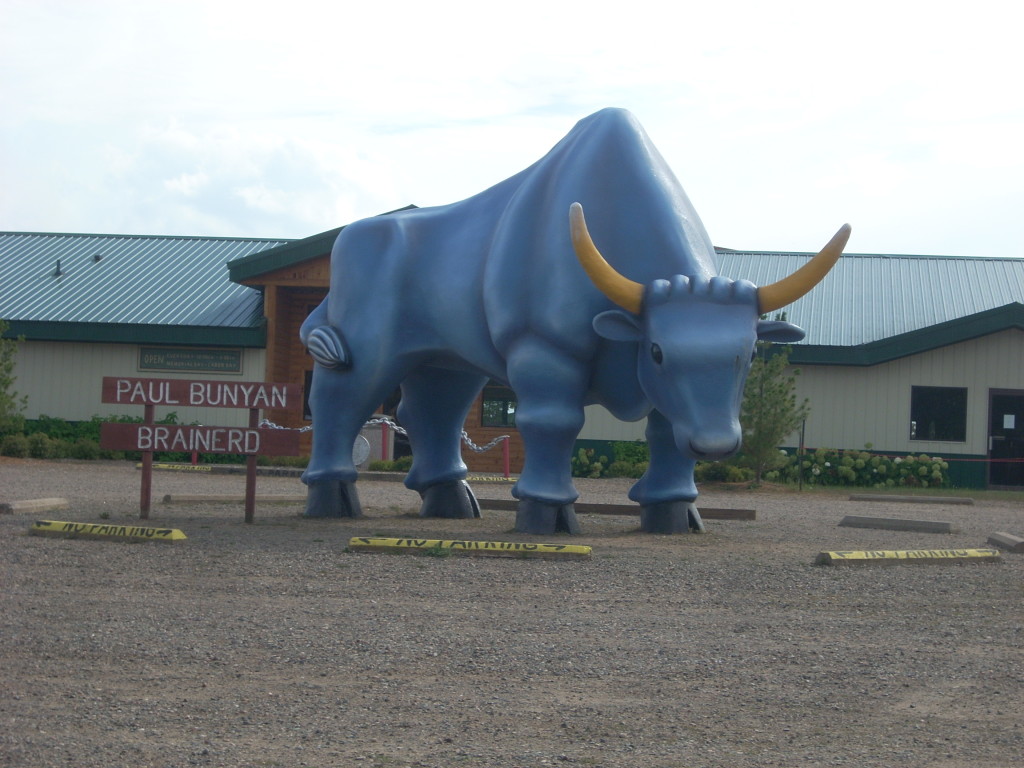 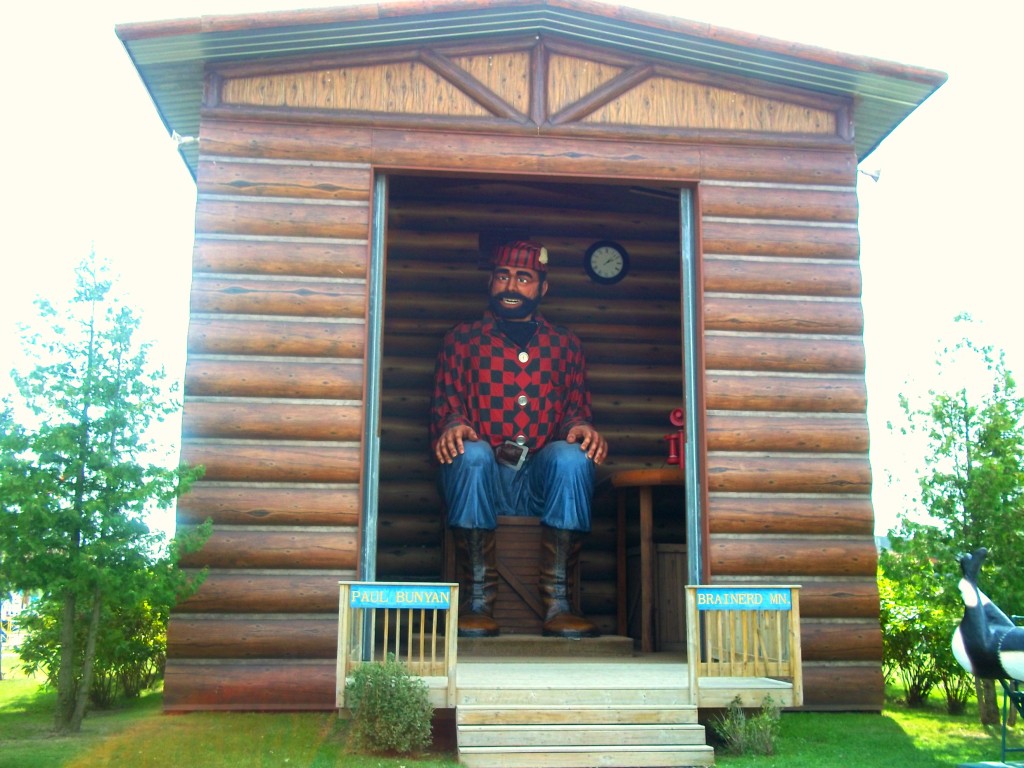 Rounding out our top 3 is Brainerd’s seated, talking Paul Bunyan.  Located at Paul Bunyan Land Amusement Park about 6 miles outside of town, this animated, talking Paul Bunyan greets you on your way in, often by name if the parents tell the staff ahead of time.  Even though you know it’s all smoke and mirrors, it’s still a bit eerie having a conversation with a giant. Babe greets visitors out in the parking lot.  Originally called “Paul Bunyan Center,” the first location dates back to 1950, but was closed in 2003 to make way for retail stores. 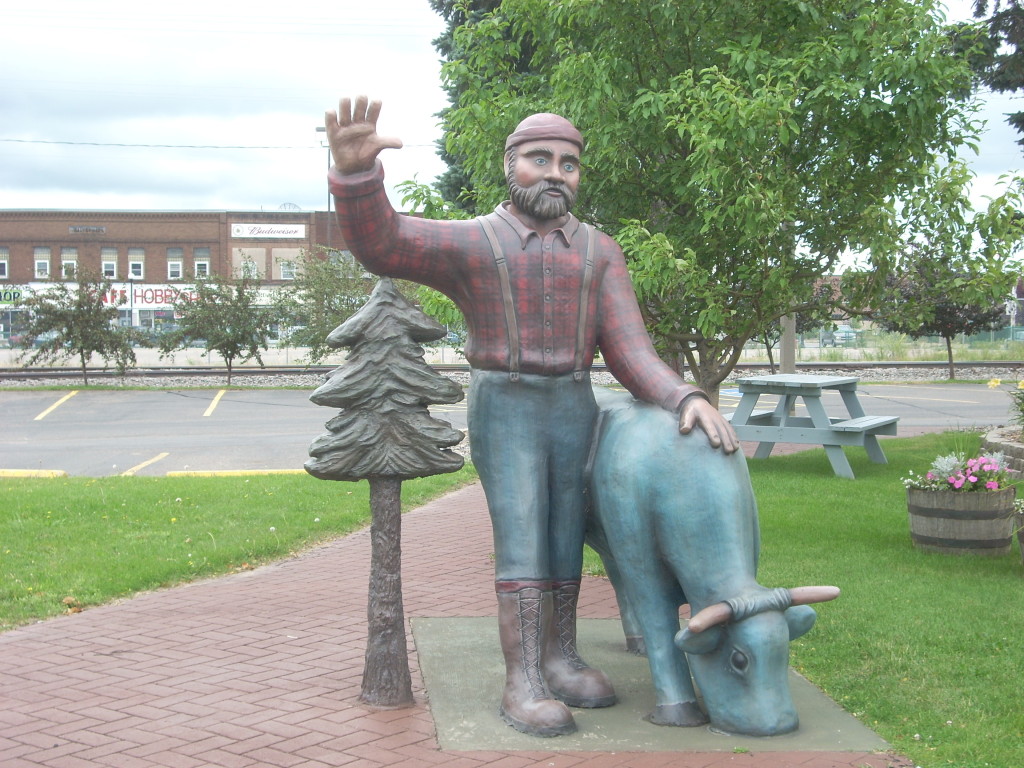 Downtown Brainerd used to feature a smaller statue of Paul and Babe in a small park near the iconic watertower.  They were recently fixed up and painted in 2007;  however, it’s anyone’s guess where as to where they are now. 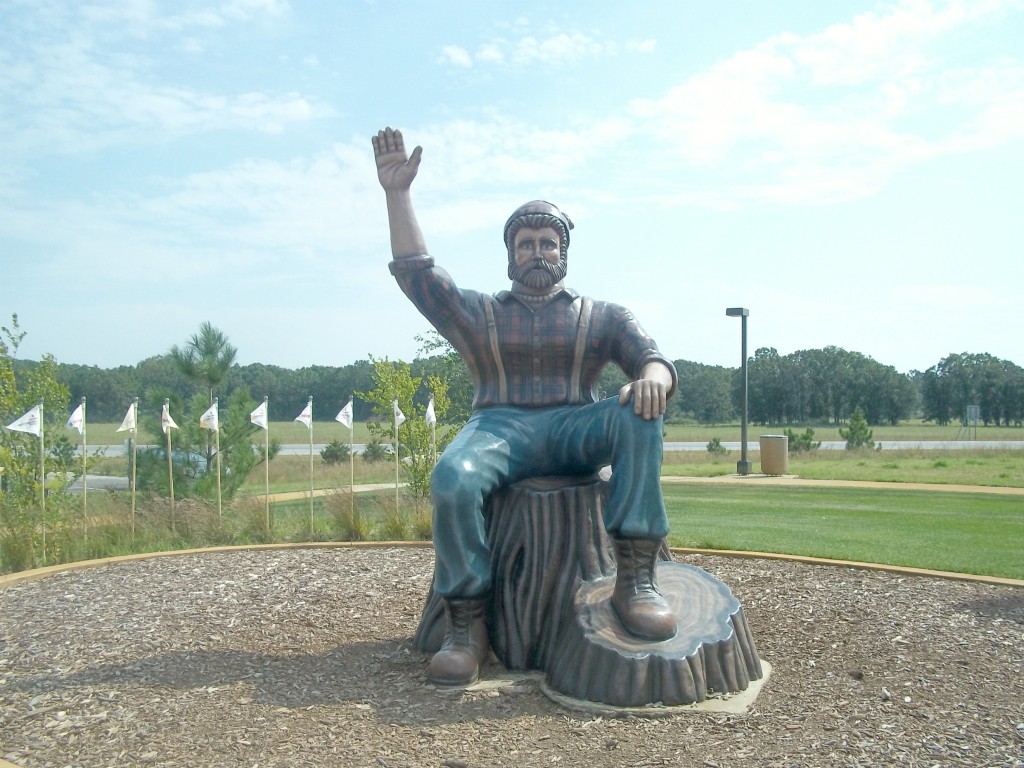 Brainerd features another fiberglass creation of Mr. Paul at the Visitor’s Bureau and Welcome Center just south of town.  This Bunyan greets visitors with a waving pose and is made of sturdy fiberglass so he’ll be around for years to come. 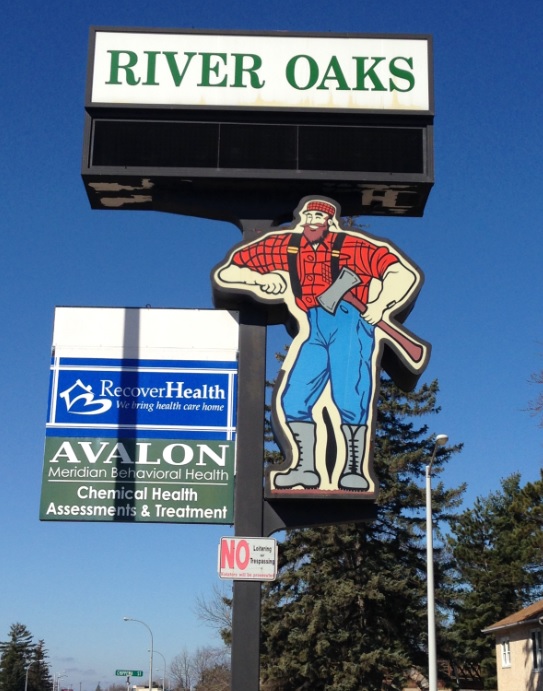 Brainerd is home to a lot of Bunyan nostalgia, including this iconic sign above some retail businesses as you enter the downtown area from the west. 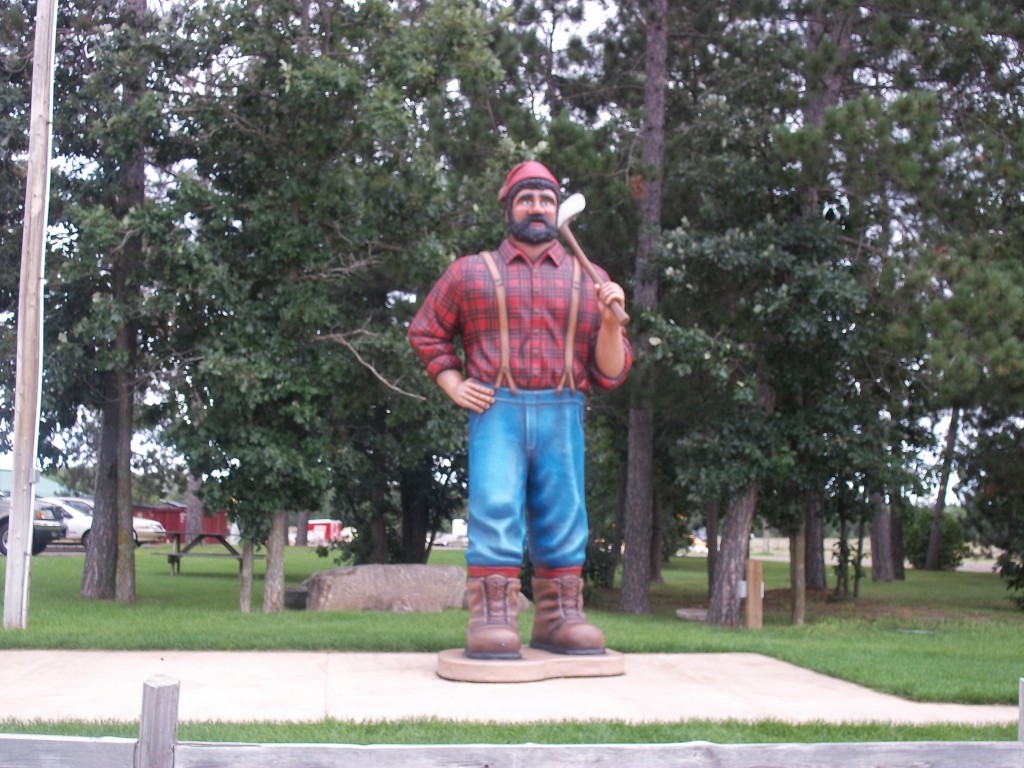 Just north of Brainerd along the Paul Bunyan Scenic byway (we’ll cover this route in our next installment) is another fiberglass depiction of our main man Paul.  Found along the highway in a small roadside park in the township of Jenkins, MN, is the above-pictured Bunyan. 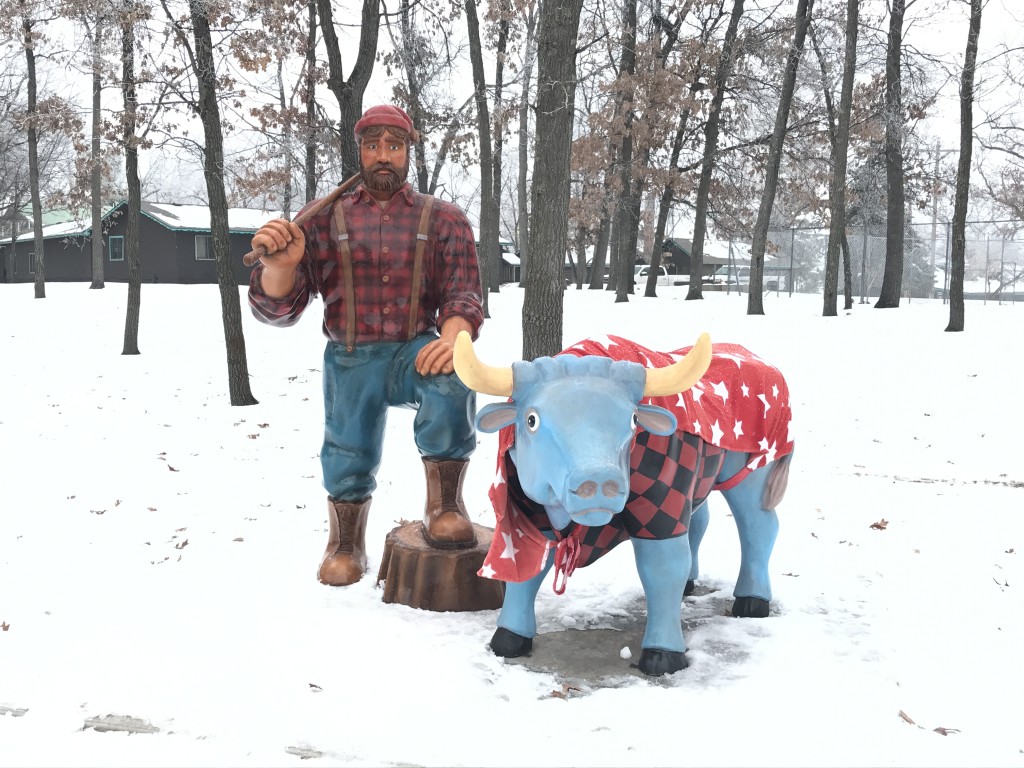 Also just outside of Brainerd at the beautiful Cragun’s Resort on Gull Lake is a newer Bunyan and Babe statue;  these fiberglass creations were added in 2013. Bunyan weilds an axe and Babe wears a cape to keep warm in winter months. 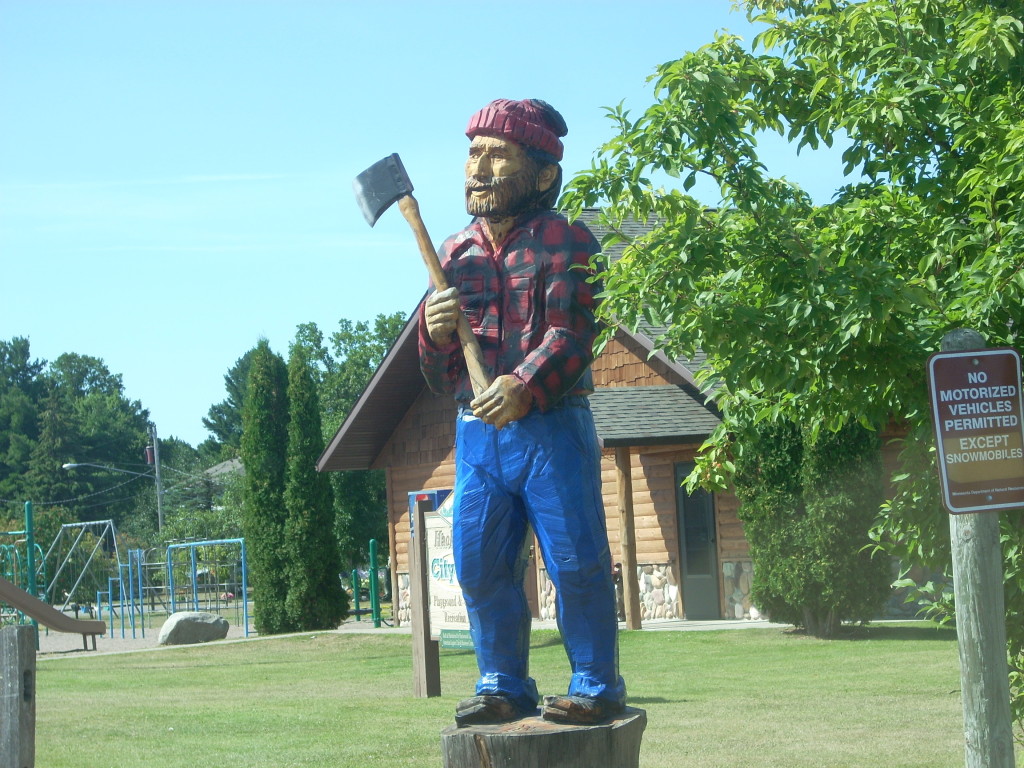 Around this same neck of the woods is the small lakeside town of Hackensack, just south of Walker.  Located here is a chainsaw-carved miniature statue of Paul Bunyan.  It’s a fitting tribute indeed. 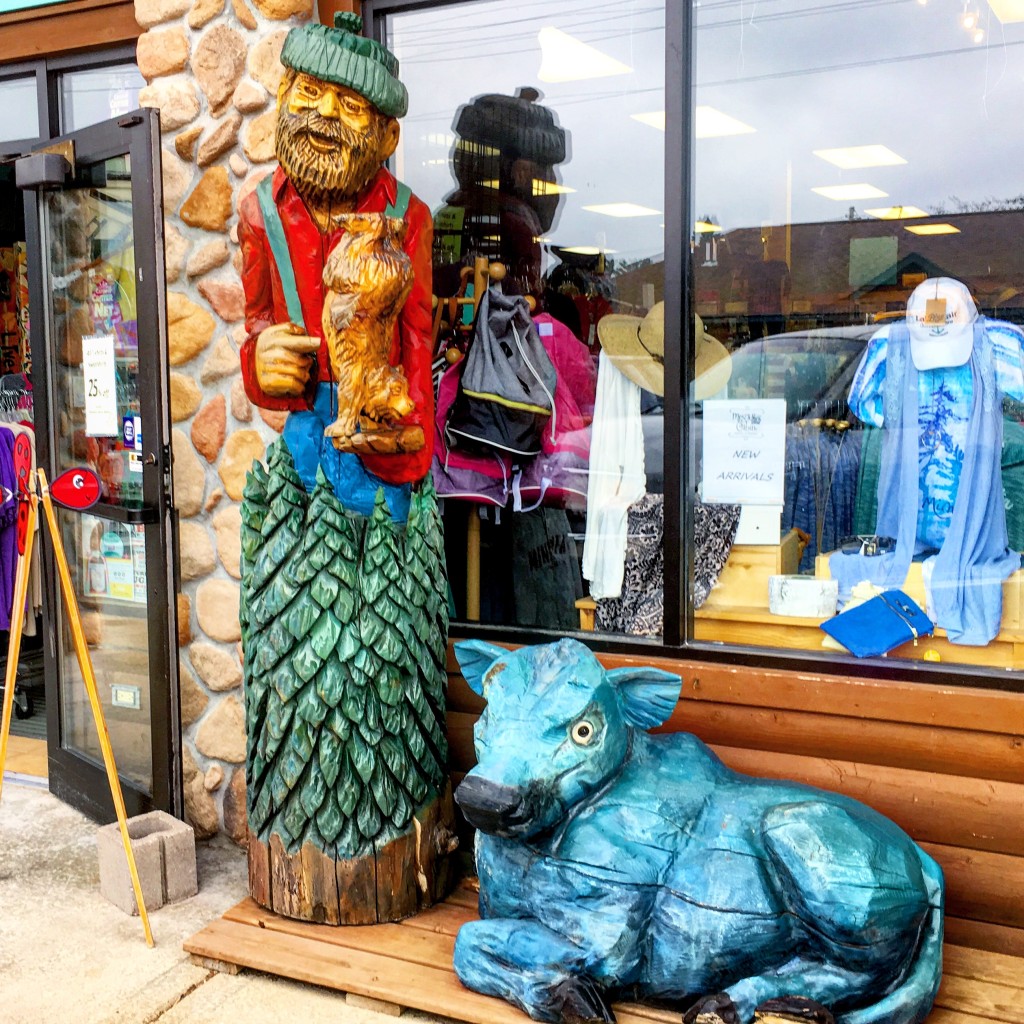 And of course we can’t forget about the chainsaw-carved Paul and Babe in downtown Nisswa. 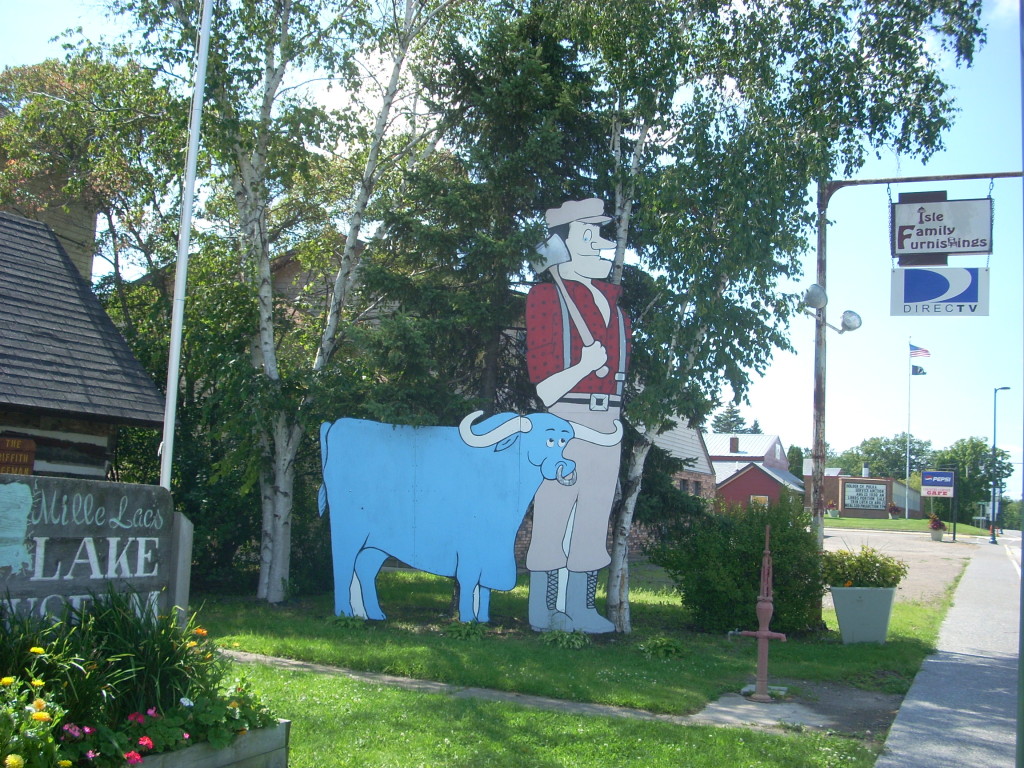 The last giant depiction of Paul Bunyan and his trusty sidekick Babe is located in Isle, MN.  Isle is a small community on the south side of the gigantic Lake Mille Lacs, southeast of Brainerd.  This Paul and Babe is a 2-D version, painted on plywood and standing about 15 ft tall. 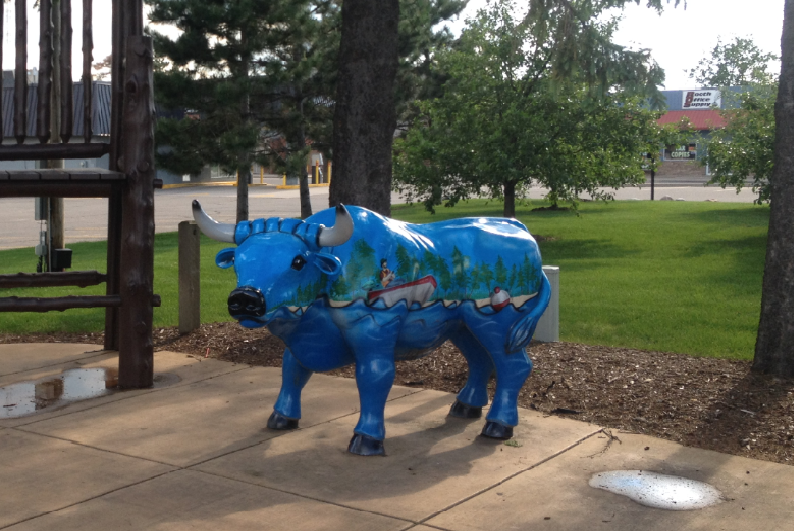 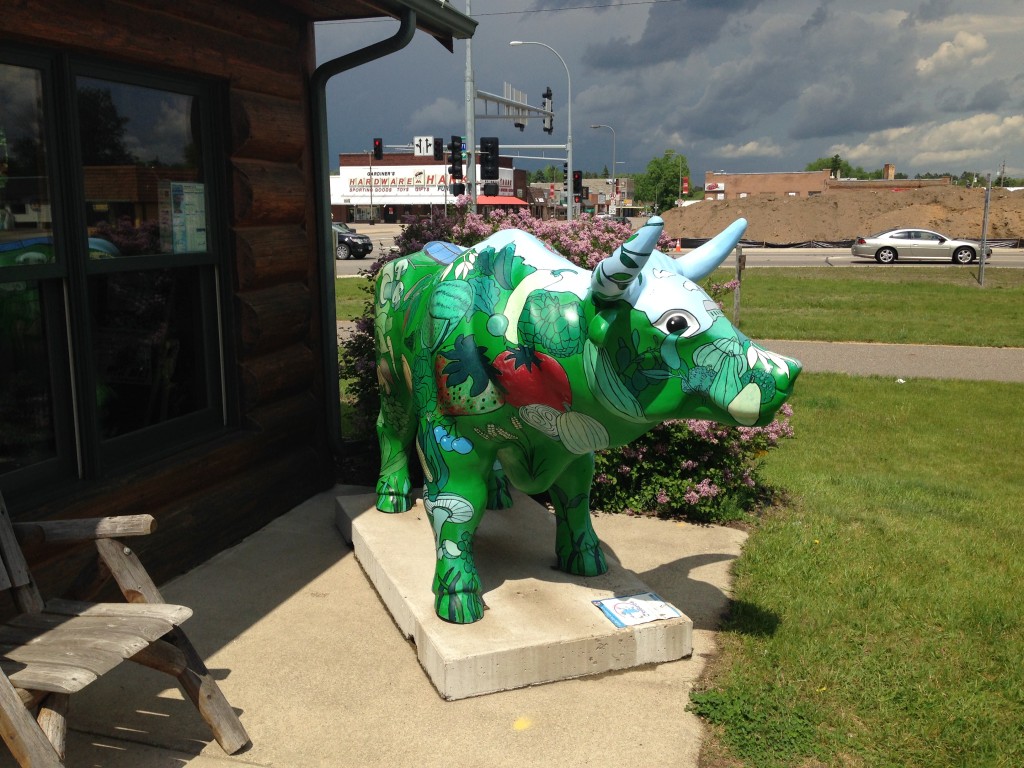 Furthermore, there is a series of smaller Babe the Blue Ox statues scattered around the Brainerd lakes area in towns such as Brainerd, Pillager, Pequot Lakes, Pine River, and many others.  These are part of a community art project, similar to Pelican Rapid’s pelican statues or Fargo’s buffalo statues.  Each of the towns feature their own take on Babe.  Some examples are shown above. 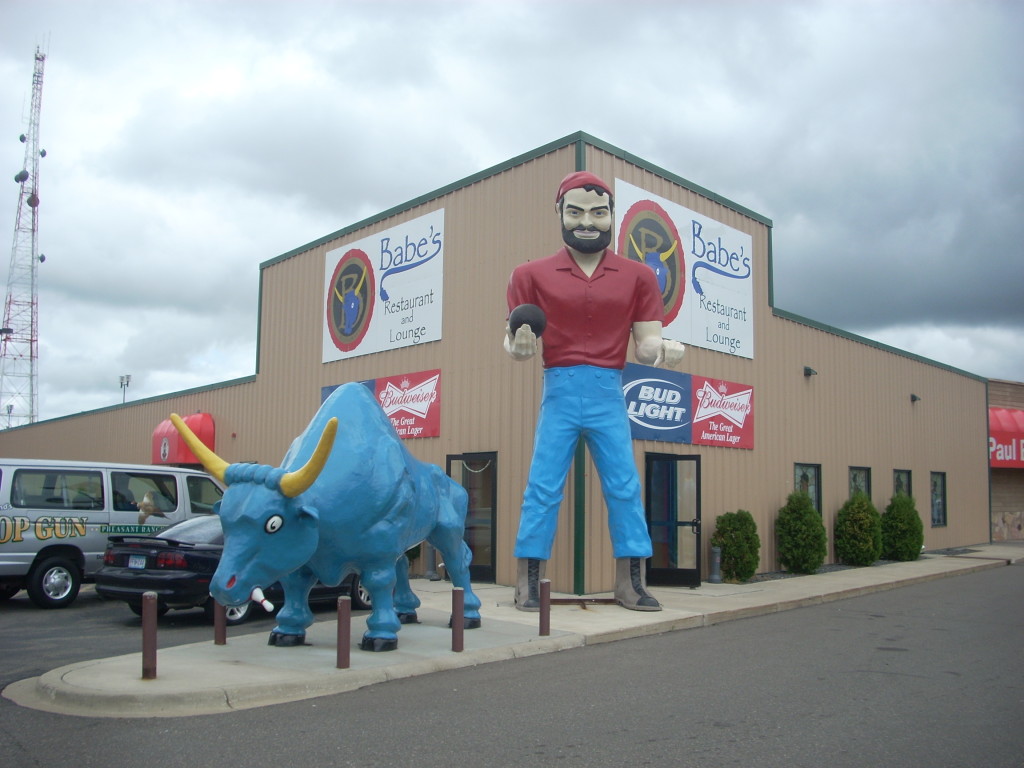 And the list wouldn’t be complete without giving a tip of the cap to the gone-but-not-forgotten Muffler Man-style Paul Bunyan and Babe the Blue Ox, which formerly stood outside of a bowling alley in Baxter, MN.  Paul held a bowling ball and the blue ox clutched pins in his mouth. This bowling alley was unfortunately leveled in 2011 to make way for a Kohl’s department store. Bunyan and his counterpart were shipped off to North Carolina, according to our friends at American Giants.

Stay tuned for next week’s installment!