While prisons are generally not where you want to be, they often times have unique stories in their history. Many have housed notable inmates in the past, and some of them are beautiful structures like the Minnesota Correctional Facility in St. Cloud. And while photographing jails and prisons seems to be a big no-no for legal purposes, sometimes it’s just too good to pass up.  The Federal Correctional Institution outside of Sandstone, MN, which appears for the most part unassuming and plain, was home to one inmate in the early 1980’s who went on to turn his life around and charm America with his iconic TV and movie roles.  Read on to find out who! 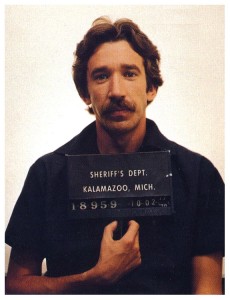 Back in 1978, Timothy Alan Dick, a 25 year old Detroit, MI suburbanite with a college degree is arrested at the Kalamazoo Airport in the parking lot for cocaine trafficking. As part of his guilty plea to avoid a possible life imprisonment due to the large amount of drugs, Dick provides the names of over 20 other drug-dealing associates.  He then goes on to be sentenced to 3-7 years of hard time in federal prison a couple states over near Sandstone, MN.  While there, he keeps mostly to himself, focusing on his comedy routines that have been a side hobby since his college years.

After being paroled, he changes his name to Tim Allen, continues with his stand-up comedy, lands a gig on hit TV show called Home Improvement, and the rest is history. Funnyman Tim Allen successfully turned his life around while right here in a jailhouse in our own Minnesota.  Good on you, Tim.  Other notable past inmates include a former NHL player named Mike Danton who tried to have a hit put out on his agent; and Mark Dreier and David Brankle, a disbarred laywer and a serial bank robber, respectively, whose stories were featured on the CNBC show American Greed.

But wait, there’s more!  Just down the road from Sandstone to the south is Hazelden Rehab Center, outside of Center City, MN. Many famous celebrities have attended rehab programs at Hazelden to get clean from alcohol addiction, including Matthew Perry, Andrew Zimmern, Melanie Griffith, Calvin Klein, Aaron Sorkin, author James Frey (who details it in his pseudo-account A Million Little Pieces), and dozens of other celebrities.  Locals of Center City report often seeing celebs attending church services in town during their rehab stints.

Judging by the photo, the joint doesn’t look so bad. But then again I have never been to a rehab facility. And although alcohol rehab isn’t a glamorous occasion, it obviously serves a great purpose.  Plus, you never know who may be in your 12-step group sessions if you end up in Center City.

While driving I-35 between Minneapolis and Duluth, you pass right through the Center City and Sandstone areas, blissfully unaware that just out of view are two places where even the most big and famous folks have hit rock bottom and found redemption.

While in the area:  Banning State Park is only a few miles from Sandstone for some outdoor exploration, and the Hinckley Fire Museum is only about 10 minutes away too. Center City is near the cool little Swedish town of Lindstrom, MN, and very close to the beautiful Interstate State Park at Taylor’s Falls.