Minnesota’s northeast corner is a rugged, scenic wilderness with rocky cliffs, crystal-clear waters, and postcard-esque little tourist towns on Lake Superior.  This area is also rich in cultural history, dating back to the 1700’s, when the first Europeans in the area were French fur traders, known as Voyageurs. These intrepid explorers often met up on the trail and traded with the Ojibwe Indians native to this area. So it’s obviously no surprise that many towns in this area have put up roadside attractions to commemorate this. 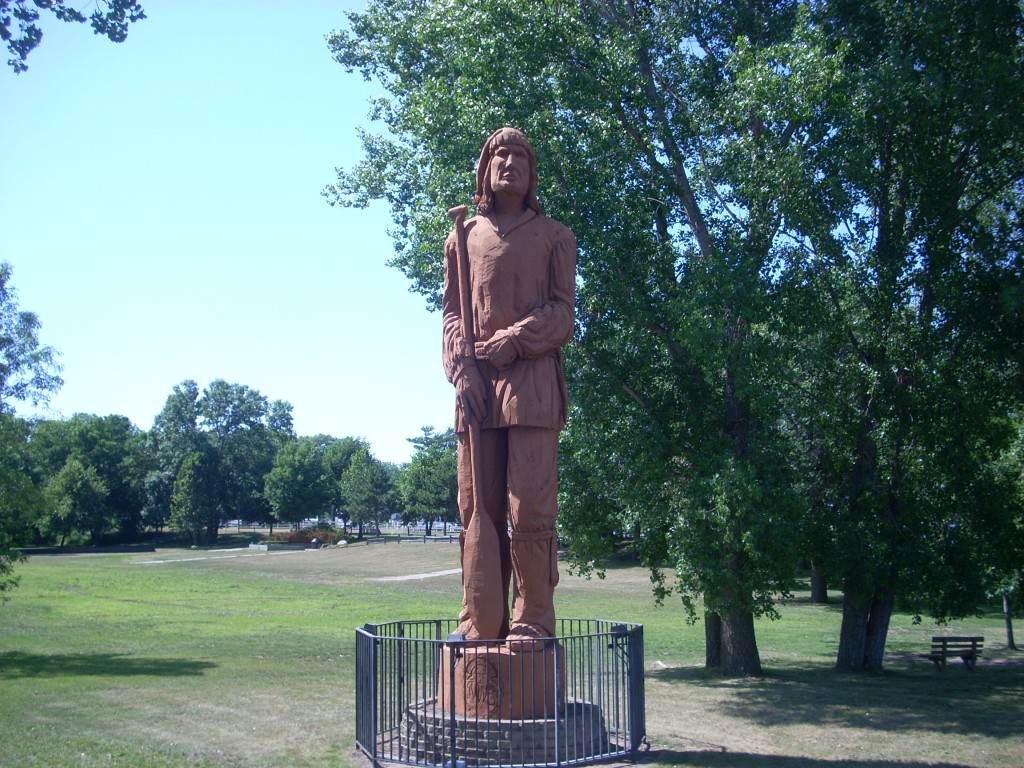 Heading north from the Twin Cities on I-35 towards Duluth, our tour begins in the interstate town of Pine City, MN. In a city park here we find a 35-foot tall Voyageur statue carved out of a redwood tree which originally came from California and measured 7 feet in diameter.  Completed in 1992 by local chainsaw sculptor Dennis Roghair, it ties in with another Pine City attraction: the Northwest Company Fur Post, a re-created 1804 Fur Trading Post where Indians and French trappers would meet up for trade purposes. 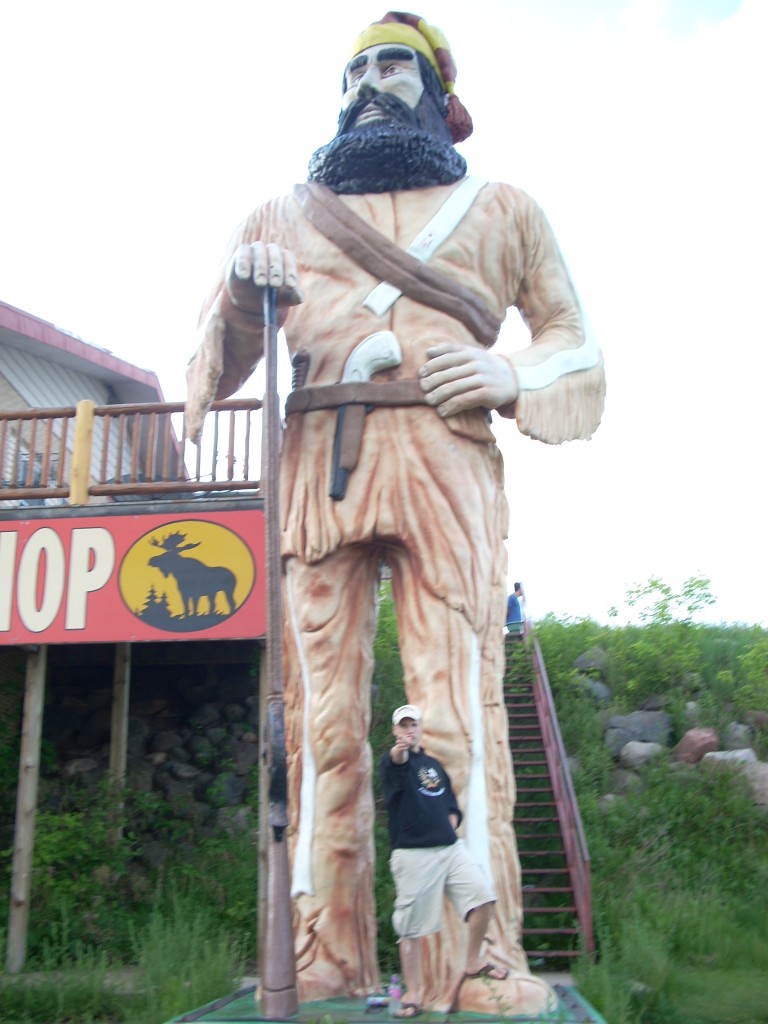 As we continue on towards the North Country, the next stop is Big Louie in Barnum, MN. This big dude stands out in front of a convenience store on a hill overlooking a lake and is prime for a photo op.  This above photo is especially significant in that it features yours truly standing at the base. 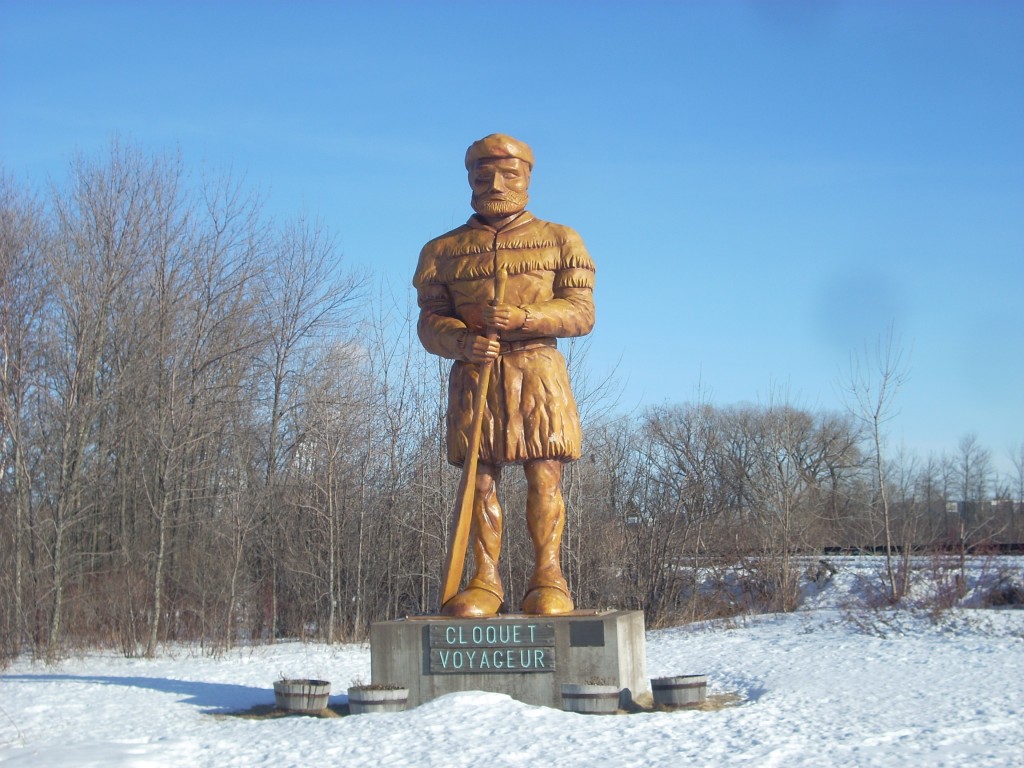 Heading north further on I-35, the next stop on the tour is the town of Cloquet, just south of Duluth.  This 25′ tall fiberglass guy stands in Dunlap Island Park, an island park on the St Louis River which was once a popular trade route for our Voyageur ancestors. Also nearby this statue is a replica of an old military fort, and just up the road is the iconic Frank Lloyd Wright gas station. 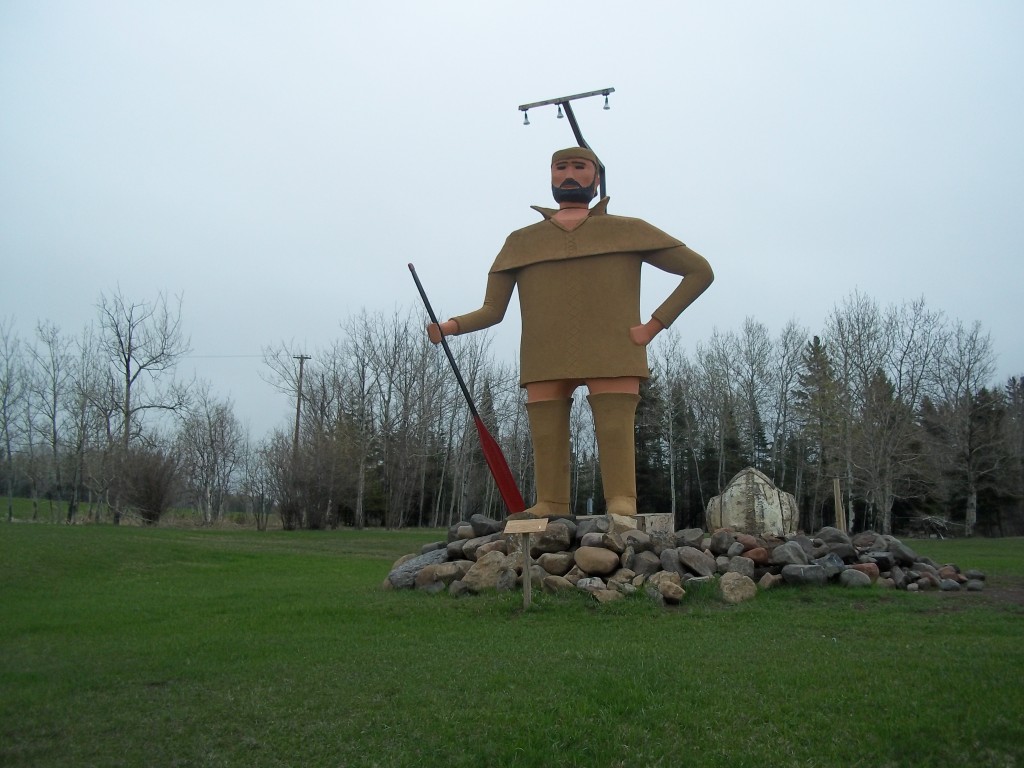 Up the Shore past Duluth is Pierre the Voyageur, who is inexplicably not wearing any pants. He stands sentinel on Highway 61 just outside of Two Harbors near a motel by Lake Superior. About 25 feet tall and made of concrete, he holds a canoe oar in his hand and his eyes light up at night, emitting an eerie blue glow. 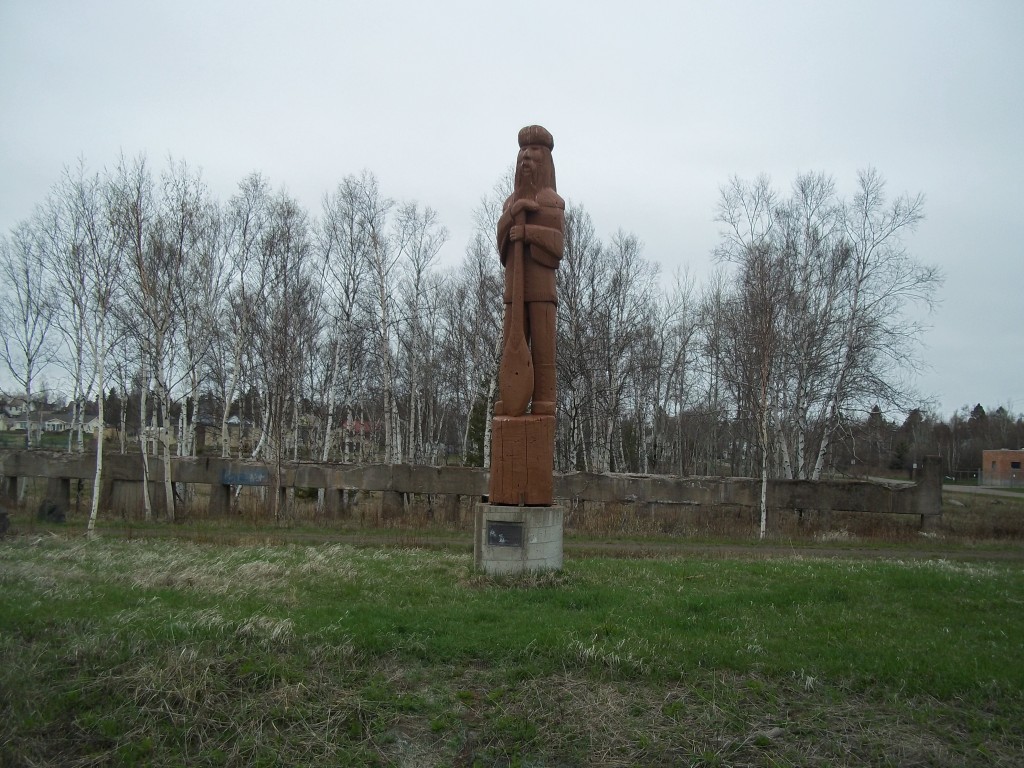 Also in Two Harbors is a woodcarved voyageur, pictured above. 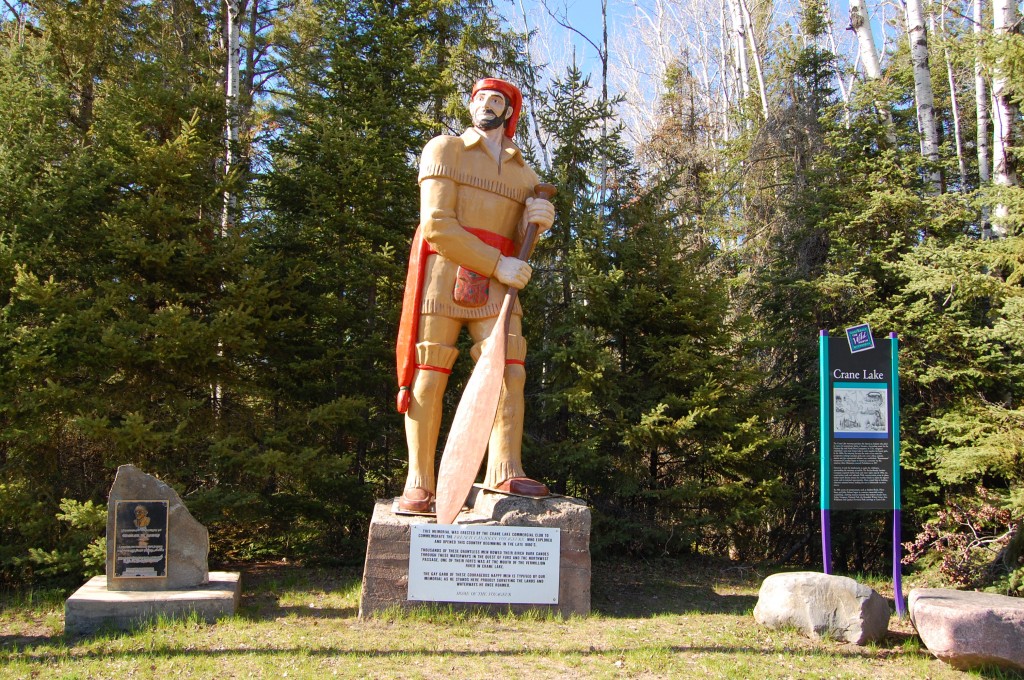 Way up towards Canada in the remote Northwoods, is another Voyageur statue outside of Crane Lake.  My first and only trip to the Boundary Waters went through this little tiny town, which is literally at the end of the road. This county road ends up in the border town of Crane Lake, which across the lake is Canada.  Crane Lake has a seaplane base, a customs office, and is the southern entrance to Voyageurs National Park. 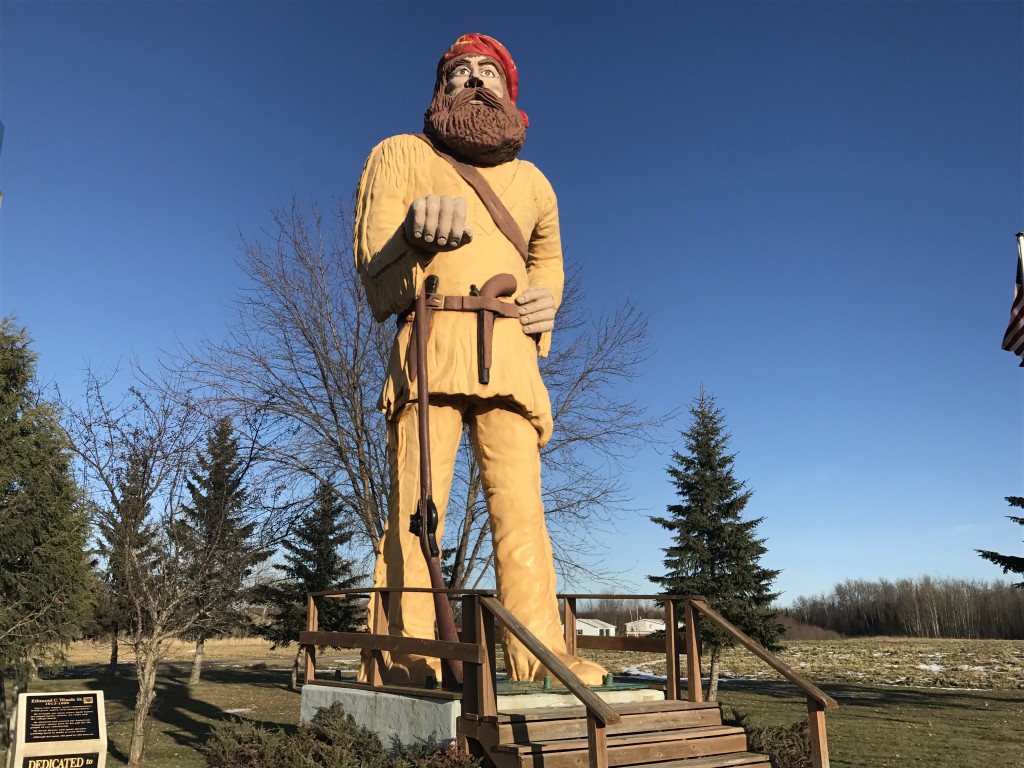 Also on the Canadian border just west of International Falls is the tiny town of Ranier, MN.  Outside of town you’ll see another Voyageur similar to Barnum’s Big Louie, named Big Vic. This one has a much more interesting backstory. Apparently back in 1980, the government was trying to seize some private land to make it part of Voyageur’s National Park.  In retaliation, Vic Davis, the landowner, had the F.A.S.T. corporation in Sparta, WI make this 25′ tall statue and even had it flown in to his island home. “The Man” (The US Park Service) obviously didn’t like this move either, and seized the statue. Davis later won the suit and donated the big guy to the city of Ranier. 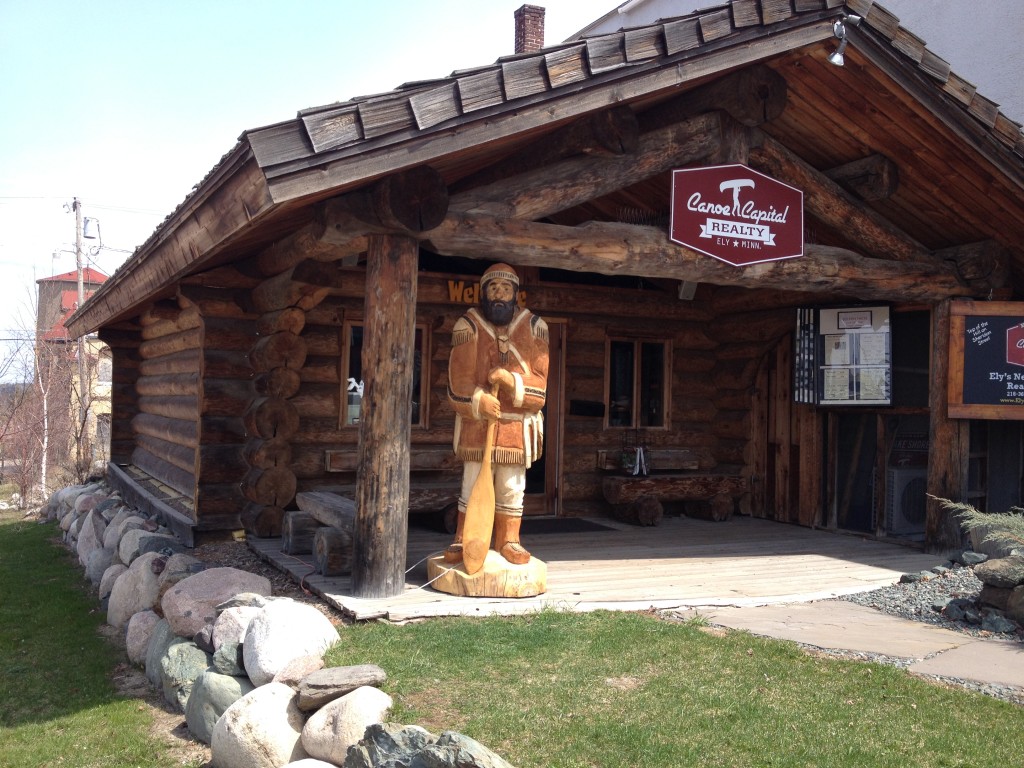 A new addition to the Voyageur collection is an ornate, chainsaw-carved statue outside of the tourism bureau in Ely, MN as well. 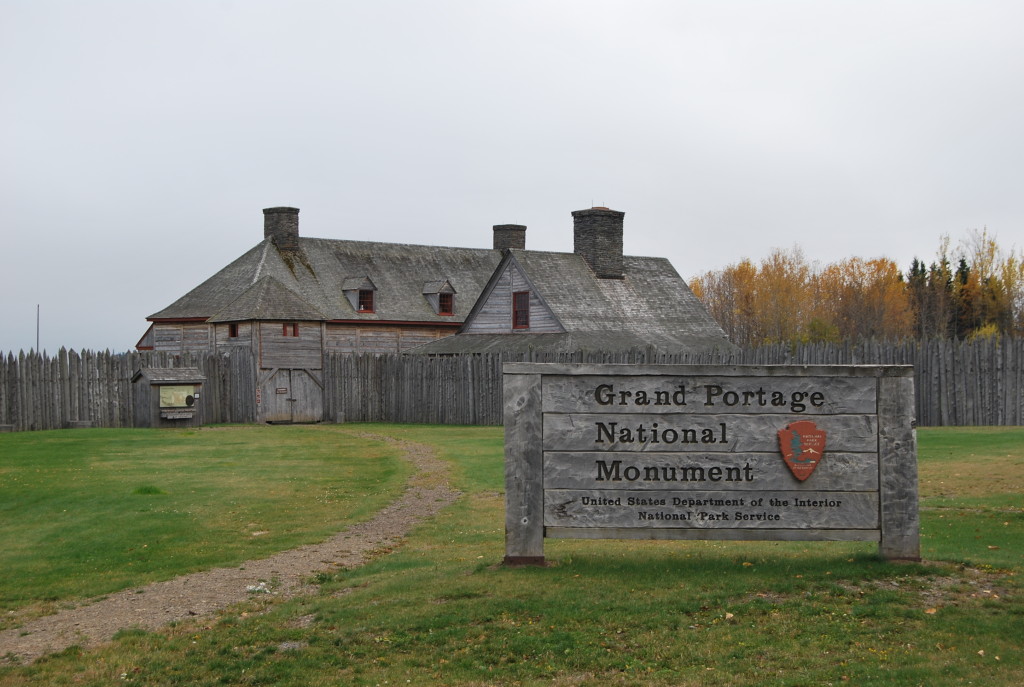 And finally, no story about Minnesota’s history of French explorers and Native Americans is complete without a reference of Grand Portage. At the very tip of the Arrowhead (the northeast corner of the state), just before you reach Canada is Grand Portage National Monument, 1 of 2 National Monuments in the state. The above photo is of the reconstructed Great Hall, a trading post where Voyageurs and Indians did business as far back as the 1700’s. Grand Portage National Monument falls entirely in the confines of the Grand Portage Ojibwe Indian Reservation, and the site was designated a National Monument in 1958. There are also outbuildings that house a kitchen, canoe warehouse, stockade, and of course a heritage center with interpretive displays that detail the history over the years. It’s a bit out of the way, but most good things are.

One thought on “Minnesota’s Voyageurs: A Tour”