We head north of the border this week with another exclusive Highway Highlights update. The tiny town of Melita, Manitoba, just northwest of Lake Metigoshe, is home to one of the all-time roadside attraction classics: Sunny the Banana and Breezy the Blue Jay. 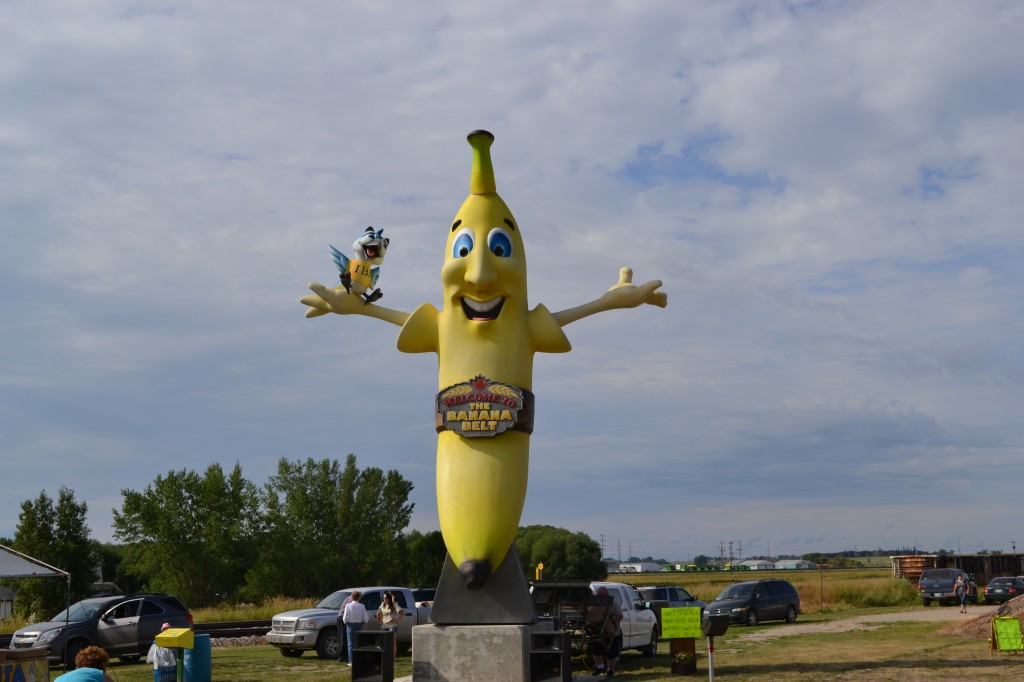 Melita is on the plains just past the Turtle Mountains and has a population of about 1,000.  It is known as a good birdwatching area, particularly blue jays.  So that clears up why this oversized smiling piece of fruit has a blue jay for a sidekick.  But as for the main attraction – Sunny the Banana. What is the meaning of this bizarre, yet awesome attraction?  Well, Melita on average is a couple degrees warmer than the surrounding areas, so local media started referring to it as the “Banana Belt” of Manitoba. Obviously no bananas grow in this area, but they took the idea and ran with it.   The statue was put up on August 10, 2010 just in time for the first inaugural Banana Days. I was able to attend a year later (see below).

The above picture shows the grassy area in front of the statue where townsfolk and visitors are setting up for Banana Days, where live music plays, food vendors and merchandisers sell their wares, and- you guessed it- bananas are given out!  The town festival also features a slow-pitch softball tournament and there was even a group there with probably the world’s largest collection of banana memorabilia on display there. Real good time. Or as the town of Melita puts it, “The town with A-Peel!”…….  *crickets*

….Anyways, stop by if you’re ever in the area.  That big goofy banana man will surely put a smile on your face. You’ll go bananas for Melita! ……. *more crickets*

While in the area:  Lake Metigoshe, the Turtle Mountains, and the International Peace Gardens are all nearby, and don’t forget to check out Tommy the Turtle in Bottineau, ND!

5 thoughts on “Sunny the Banana and Breezy the Blue Jay, Melita, MB”