There are a lot of quirky things to see and do around Baraboo, Wisconsin.  The small town just south of Wisconsin Dells is home to the famous Ringling Brothers, Dr. Evermor’s Forevertron; and this week’s curiosity, the “Man Mound,” which dates back to the late Woodland Period (750-1200AD).

Man Mound is an earthwork figure that was discovered around 1859 by a European settler named William Canfield.  These earthen mounds were created as “effigies,” or sacred figures depicting animals, warriors, or even gods of ancient tribes with no written history or meaning as to why.  Almost 75% of them which used to dot the Upper Midwest are now gone, most of which were plowed over for agricultural or developmental purposes. In fact, even Man Mound was hacked off at the knees so a road could be built right through it.  The “legs” are painted right onto the road. 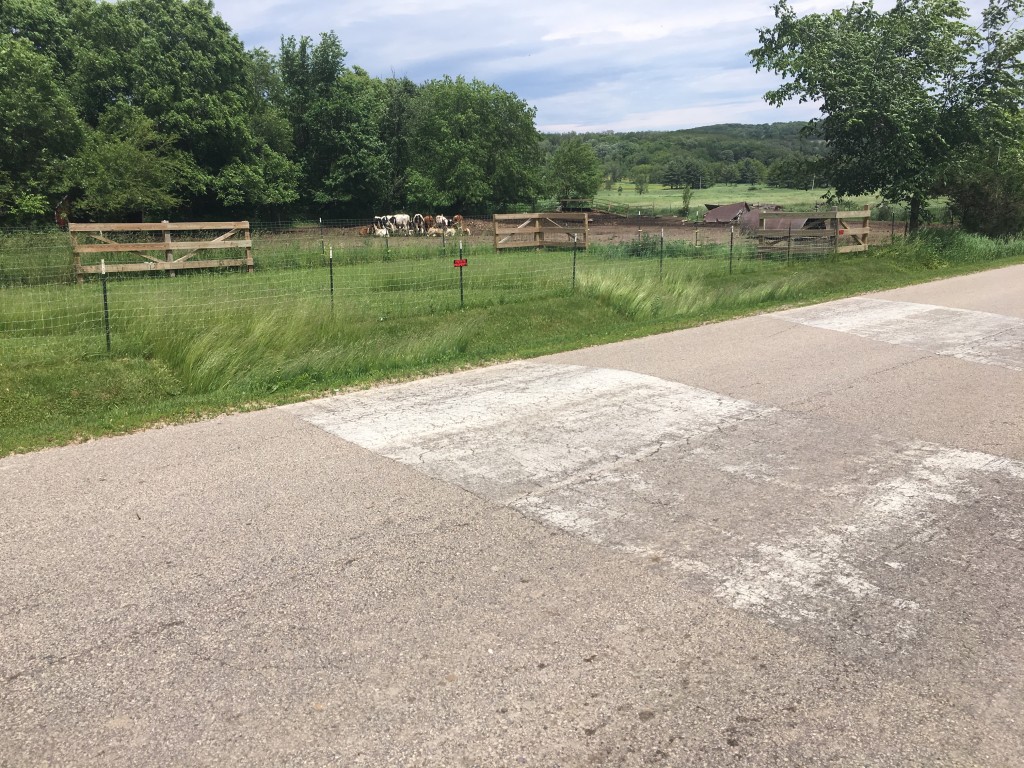 Man Mound is the last remaining mound to depict a humanoid figure (only five were ever known), and its origin remains mysterious. The man measures 214 feet in length and rises about 2.5 feet above the ground.  The head part of the figure splits off into a “Y” shape, and theories speculate this could have been horns, a headress, or even a viking helmet.  They are difficult to depict what shapes they are from the ground, although aerial photography shows the figures quite clearly.

After its discovery, Man Mound was largely forgotten and was almost completely plowed over around 1905 by the farmer who owned the land.  Fortunately a local grassroots effort raised enough capital to purchase the land from the owner and saved it.  The Sauk County Historical Society dedicated it as a regional park in 1908.  In later years, it was listed on the National Register of Historic Places, and in 2016 it became a National Historic Landmark, ensuring its safety. 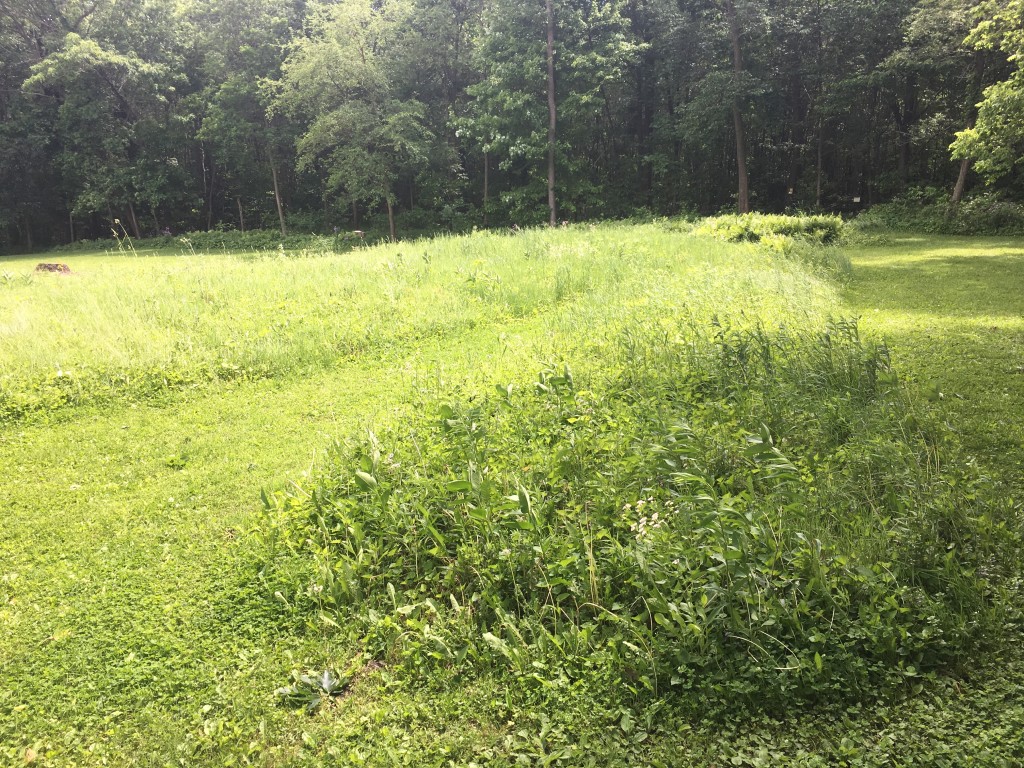 The mounds were often sacred burial sites, although it is unknown if Man Mound was one of such sites, considering it was never excavated.  The small park is found about 4 miles outside of Baraboo in an area of green, rolling farmland.  The park is free to tour, and an informational plaque tells visitors the history of the Mound. You are able to walk around and photograph the Mound, but be cognizant of the fact that it is a protected, ceremonial, and sacred site. 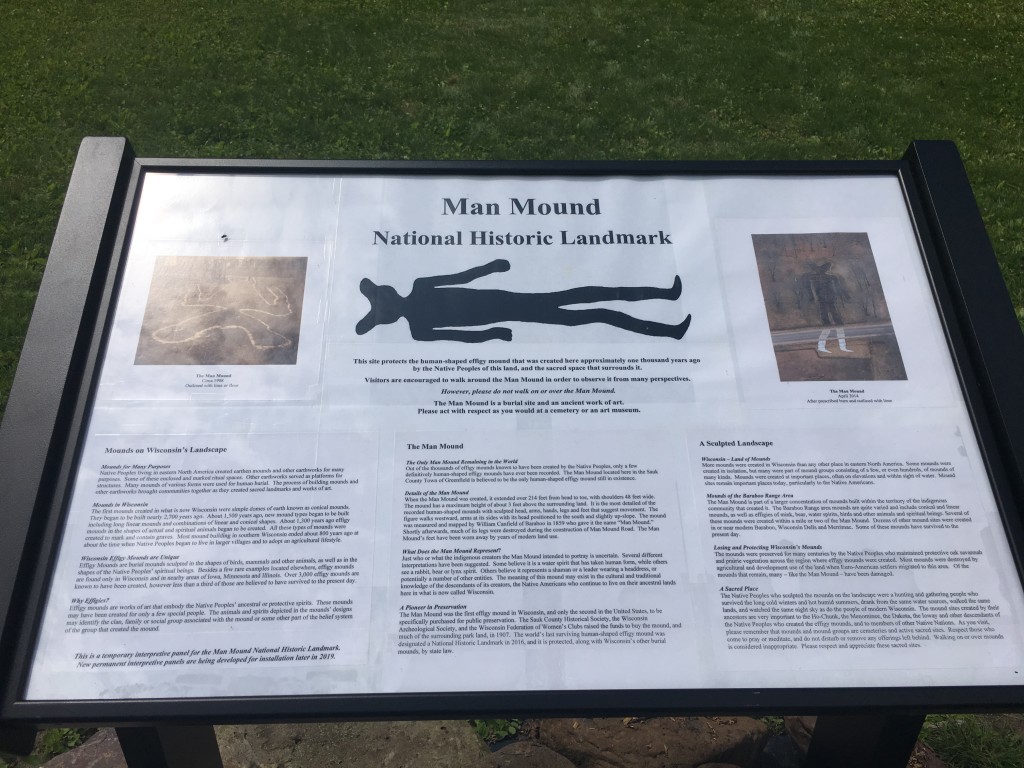 What Man Mound was intended to depict is entirely left up to visitors to interpret.  Was it a historical figure? A Shaman? A warrior, a god, or a tribal chief?  The ancient people who purportedly made these effigies have no written history or living ancestors, so it will forever remain an enduring mystery.  Many of the last remaining mounds are on private property and as long as they were not burial sites, they are vulnerable to destruction or removal at the owner’s discretion.  Historians and other authorities on such works hope Man Mound will bring publicity to these historic landmarks, and we sure agree.

While in the area:  If you’re visiting Wisconsin Dells, take a half-day to explore the Baraboo area, about 15 minutes south of the Dells. You’ll find quirky fun things like the Forevertron, the sprawling Circus World attraction, great hiking at Devils Lake State Park, and the historic Ringling Brothers Theatre and Clown Museum.