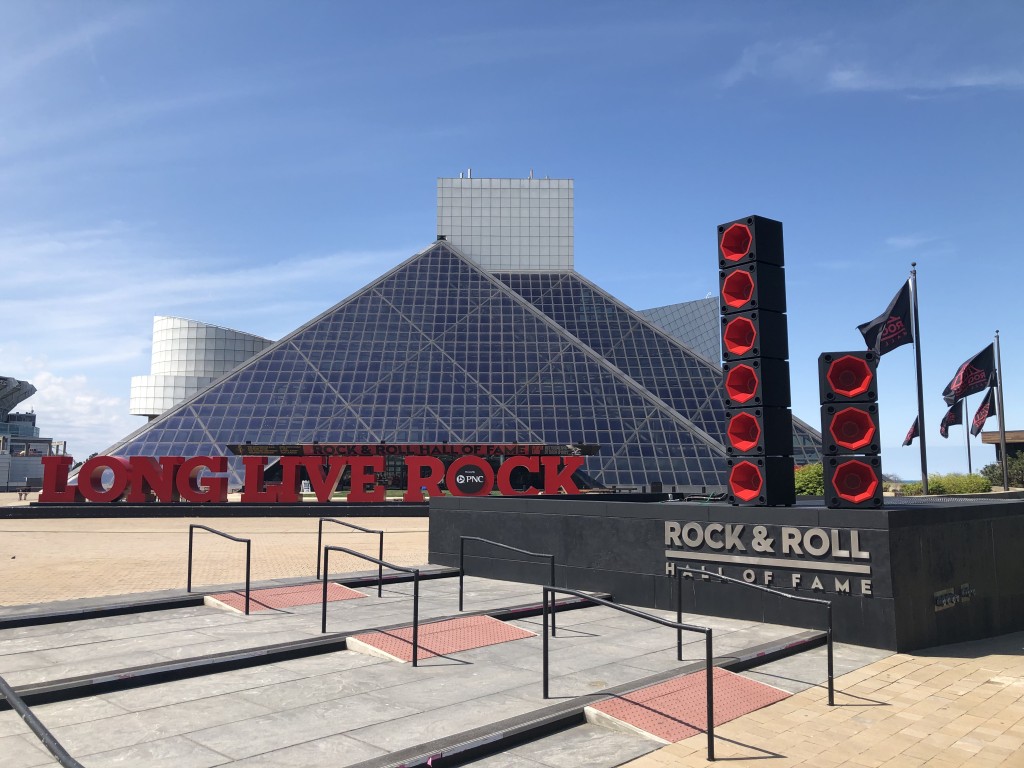 The Rock and Roll Hall of Fame in Cleveland, OH, on the shores of Lake Erie is truly one of those places everyone should see sometime in their life before they die.  It’s a big place. Jam-packed with musical artifacts and effects, it takes a couple hours at the minimum to see.   In here you’ll see it all – instruments, clothes, Grammy awards, vehicles, artwork, and anything else you could possibly imagine. 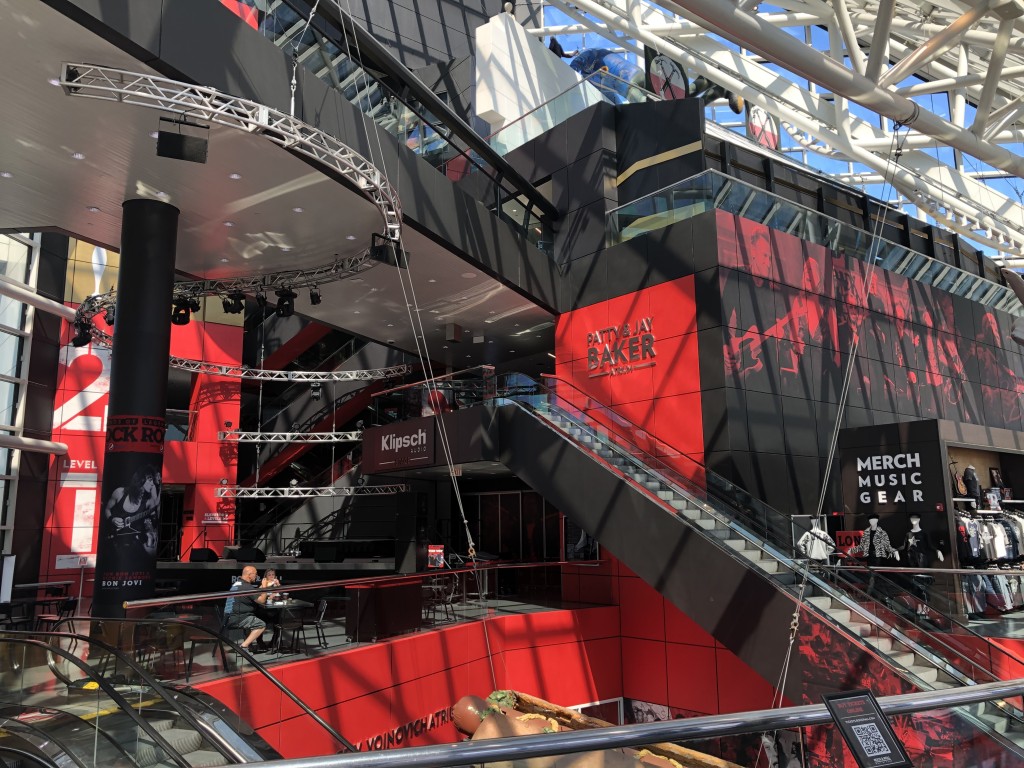 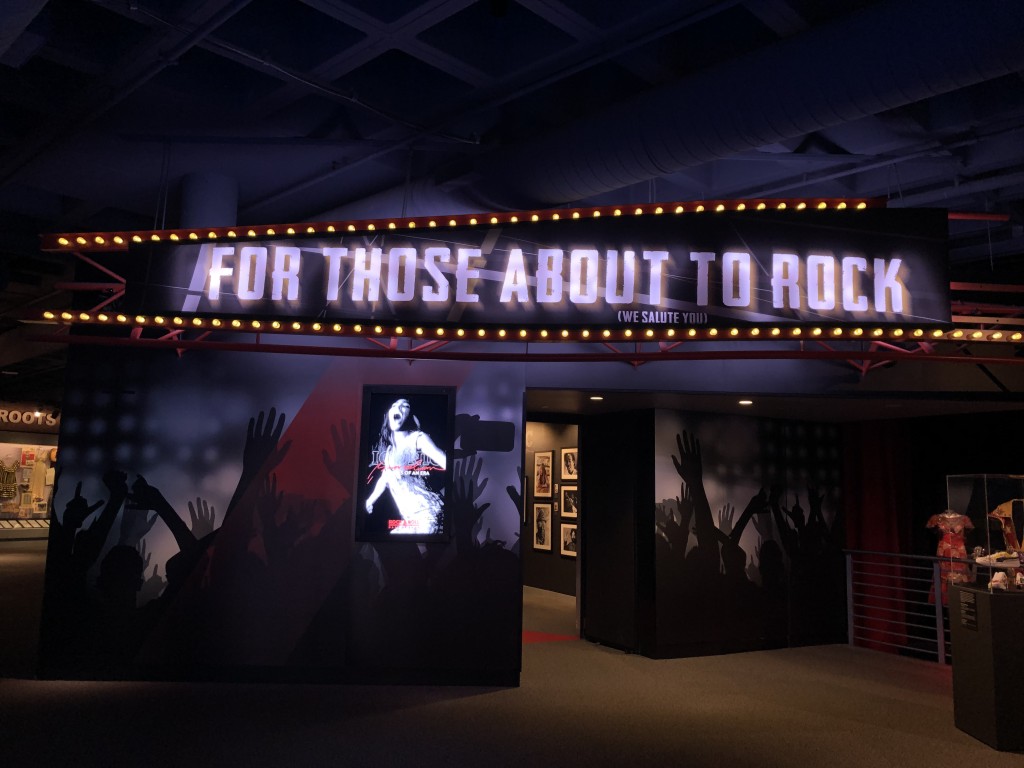 Found inside a 5-level pyramid on the edge of downtown Cleveland, the Rock and Roll Hall of Fame is incredibly interesting, even to those who aren’t music aficionados.  The tour starts in the basement, with a banner quoting a famous AC/DC line, “For Those About To Rock.”  The first things you’ll see, depending on which way you head once inside the exhibits, is the history of rock music, dating to about the 1930’s-40’s.  You’ll see some history on Gospel Music around there as well. The next room is of course completely dedicated to the King himself, Mr. Elvis Presley. You’ll see his sequined jumpsuit, a three-wheel car, his guitars, and video on a loop of his live performances. 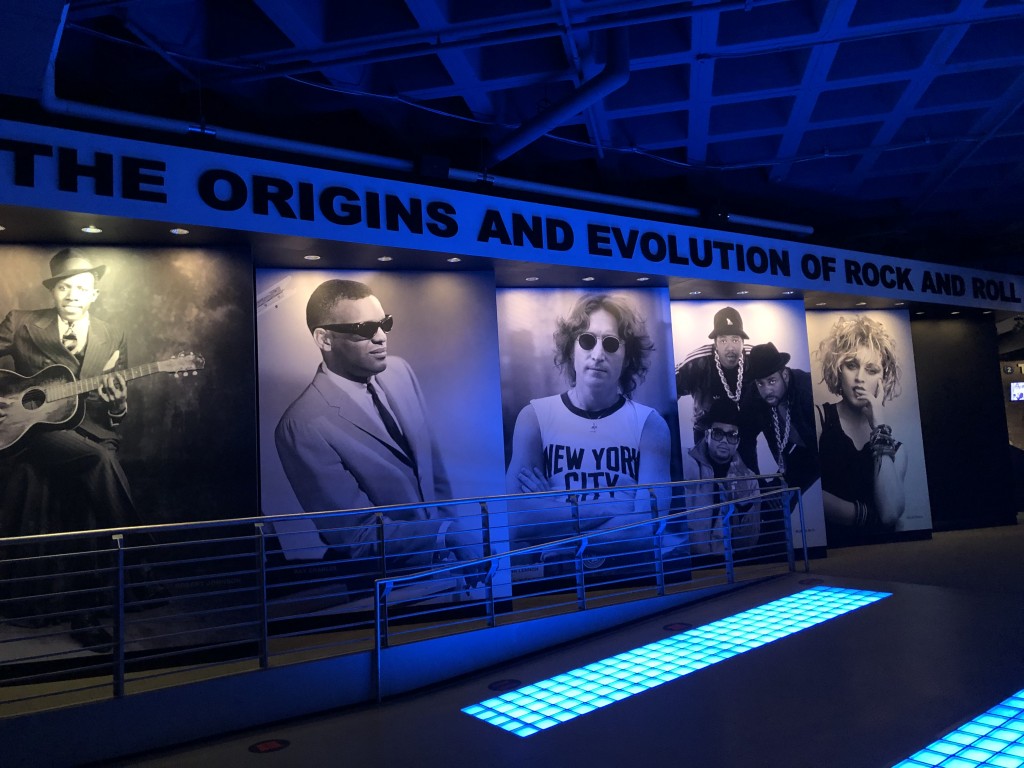 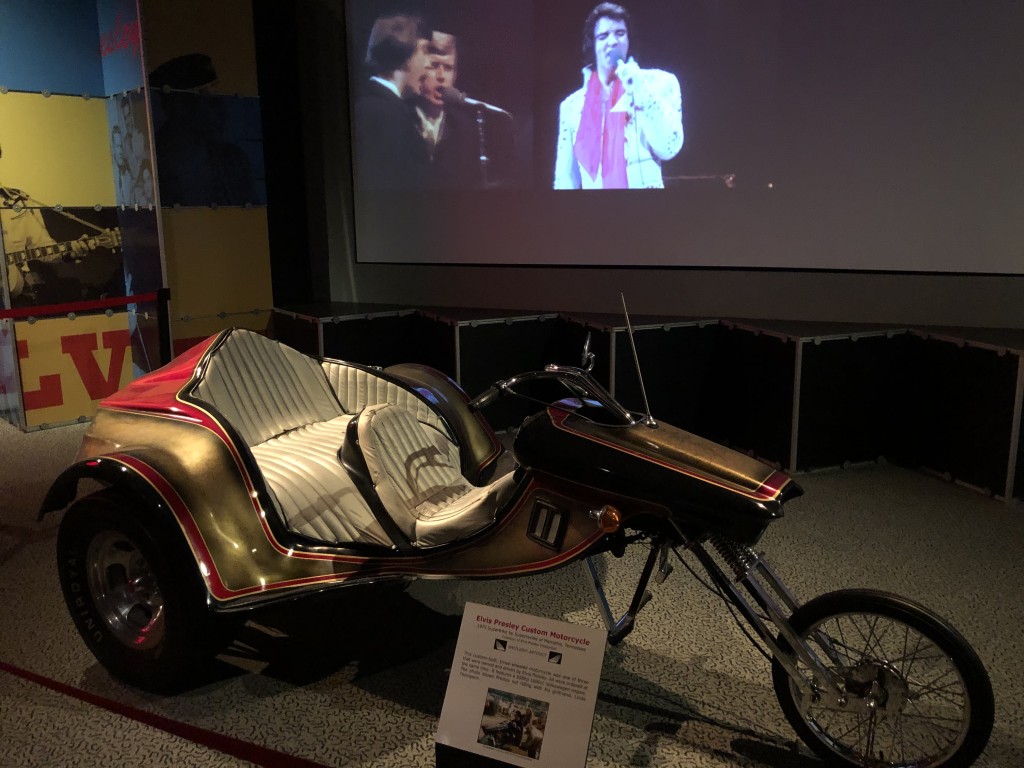 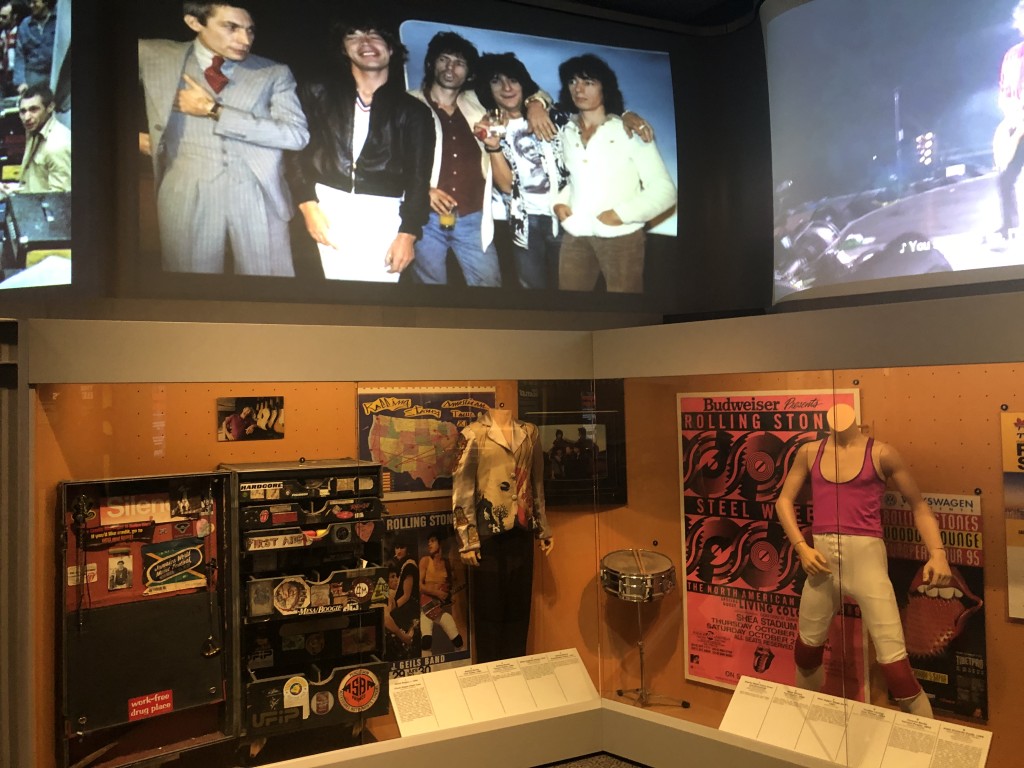 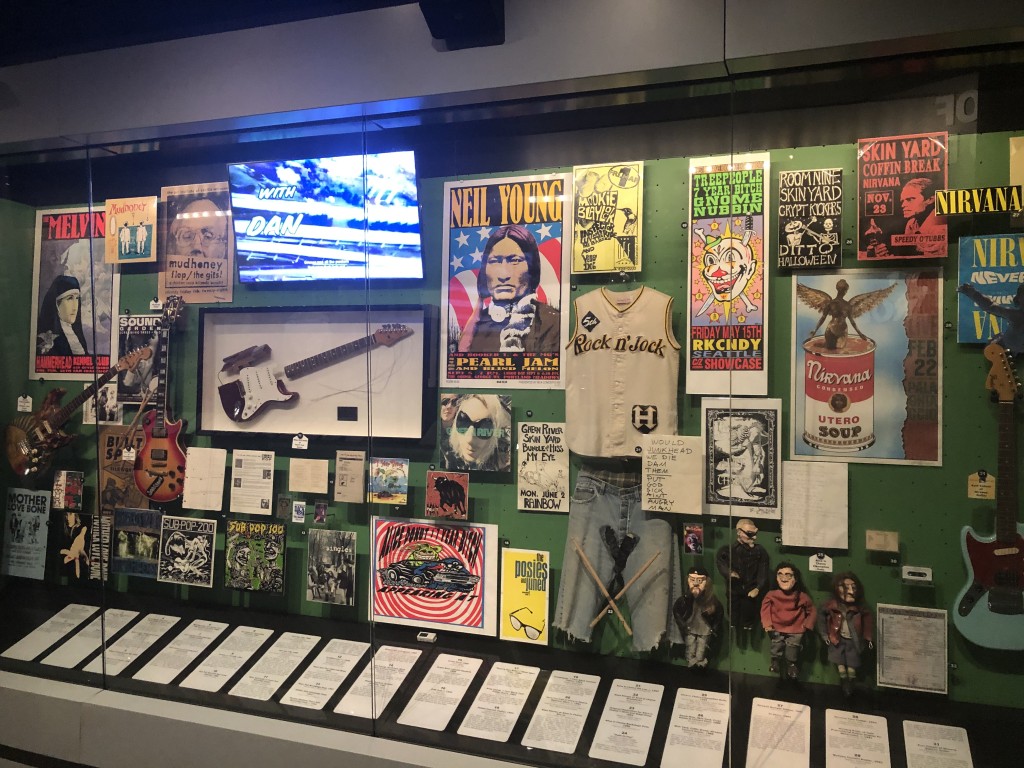 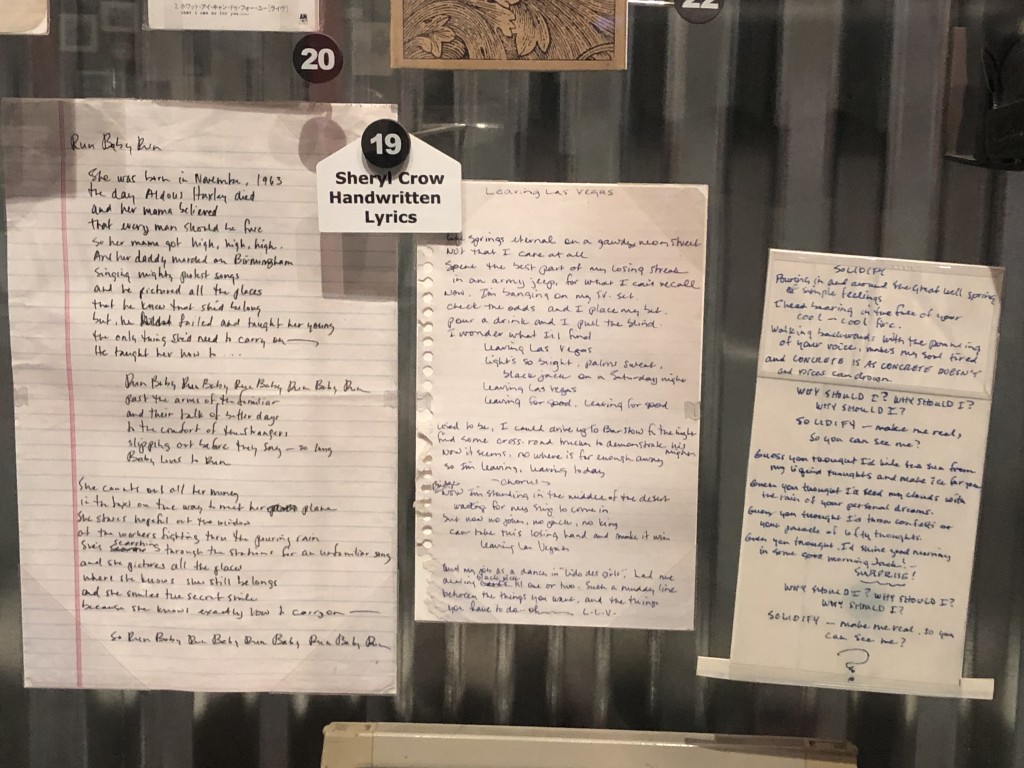 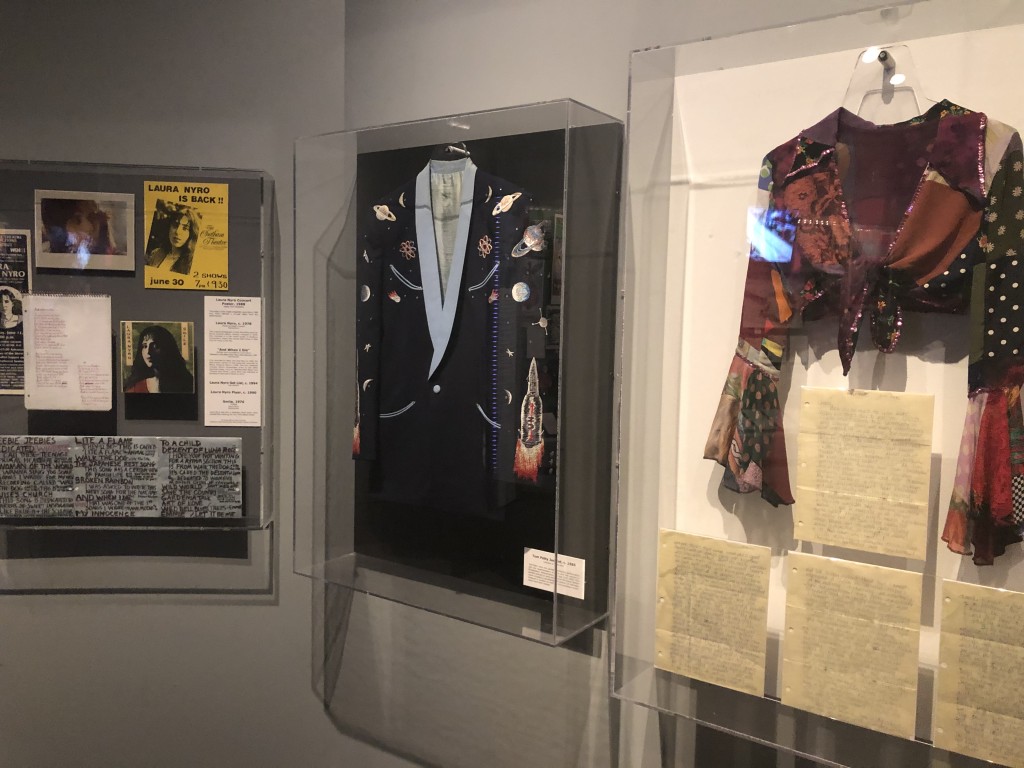 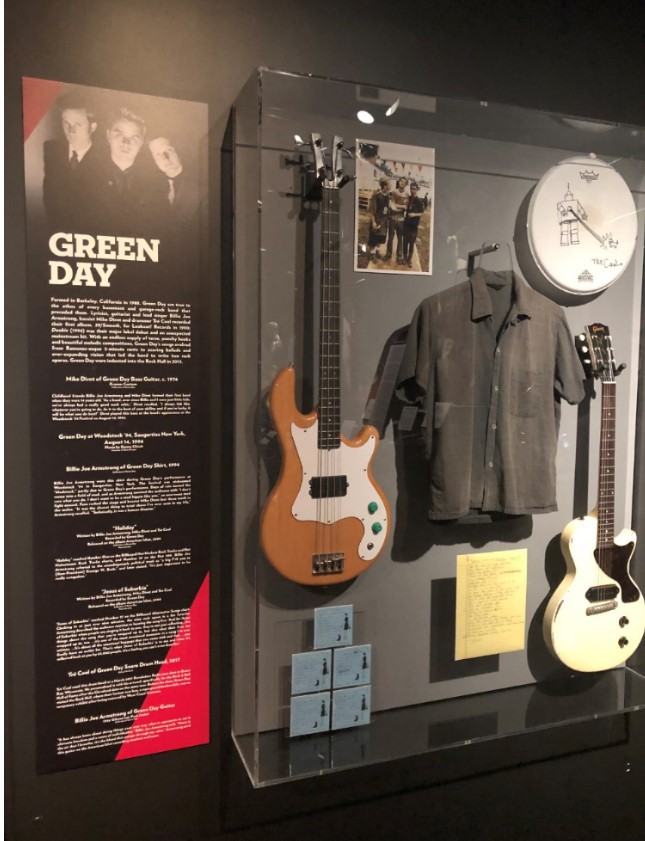 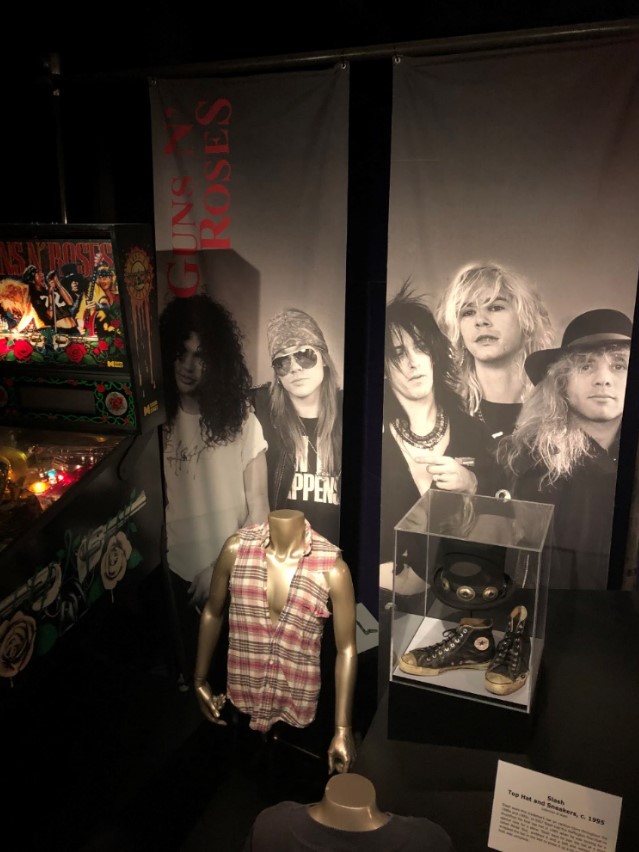 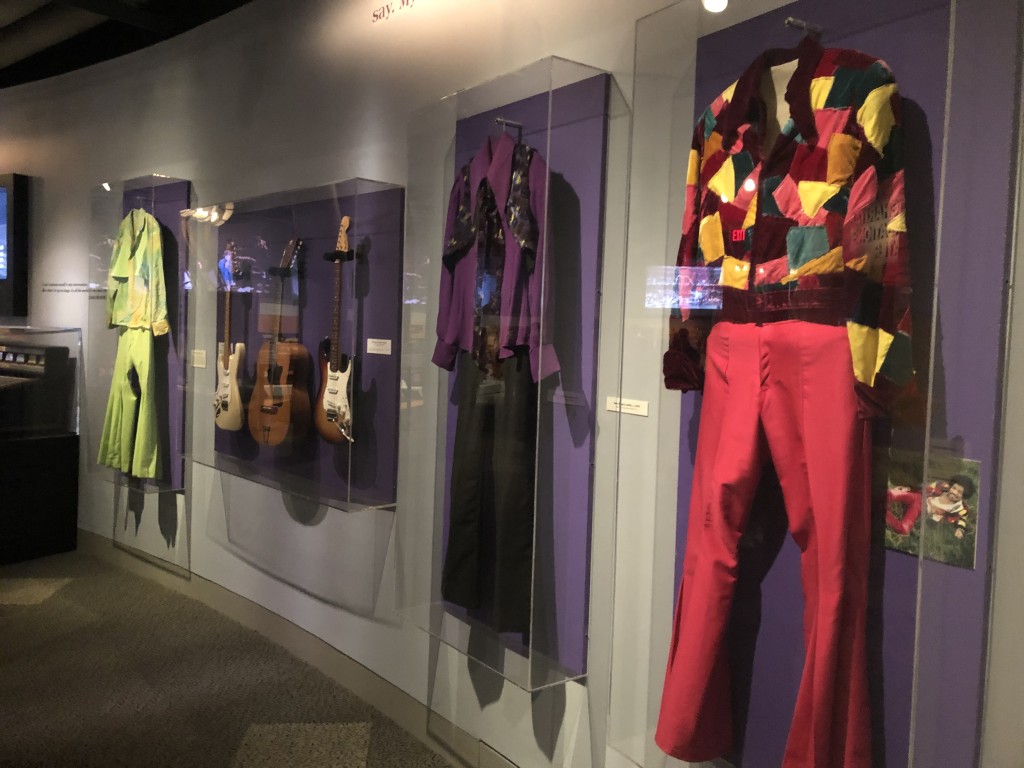 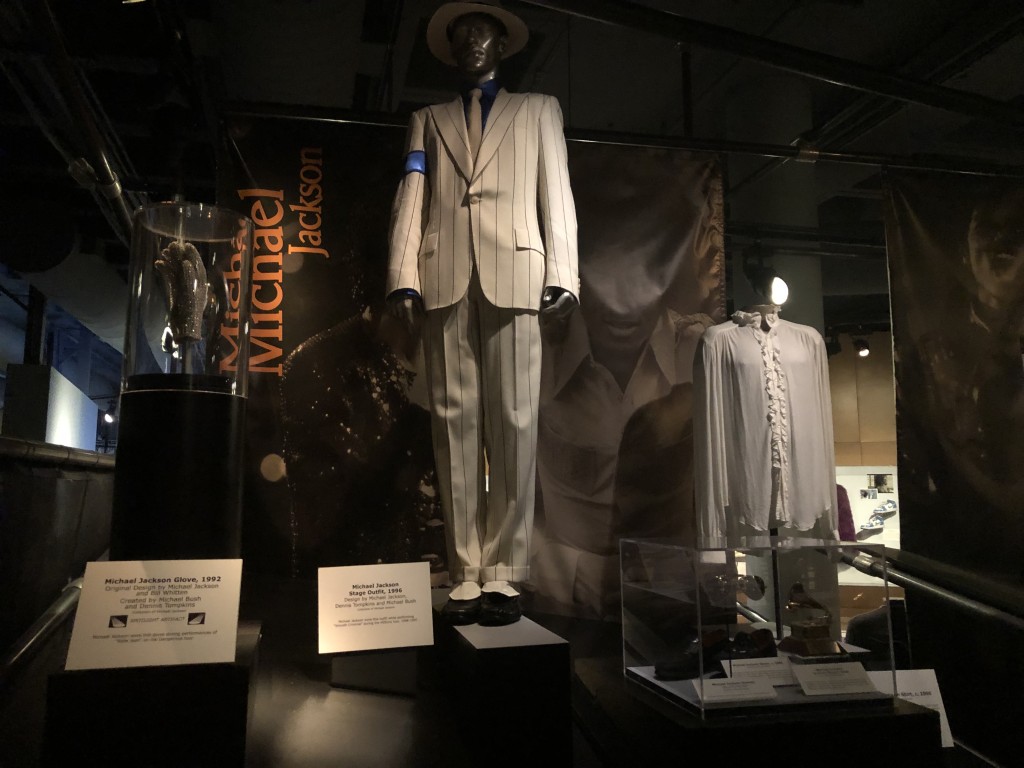 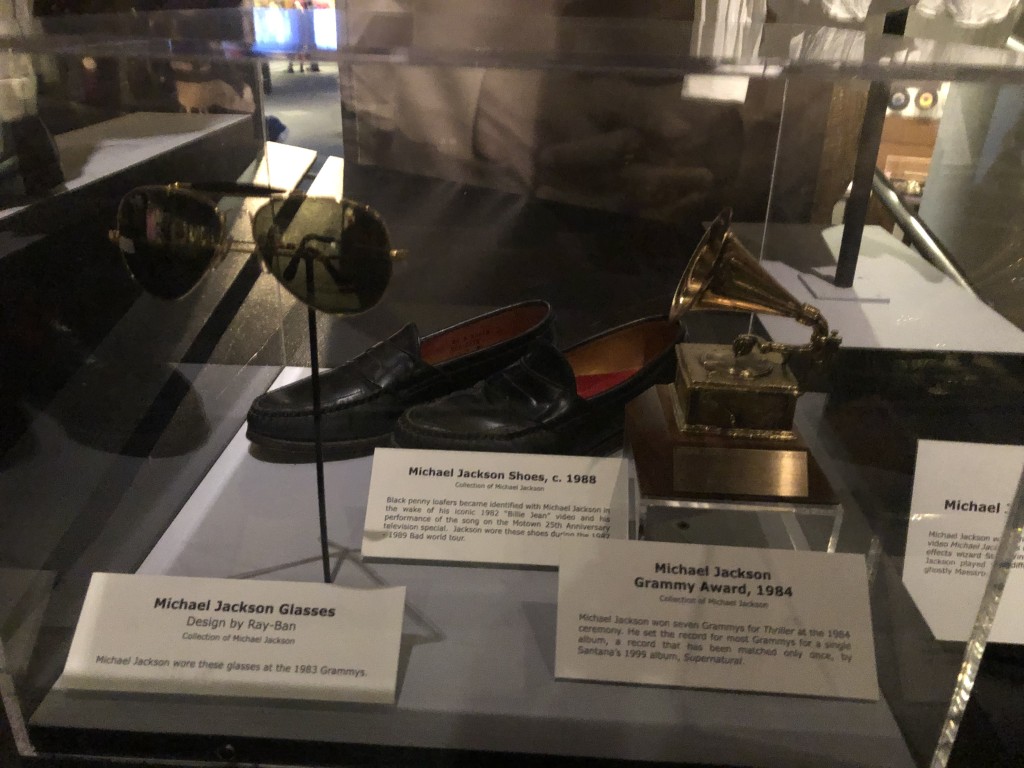 Following the escalator up to the next several levels, you’ll learn about the Hall of Fame’s history, the process as to how inductees are selected, and who made the cut each year.  More displays are found on each level, running the gamut from the Grateful Dead to Fleetwood Mac to Bon Jovie and on. One of the mezzanines features a 20-ft tall art display of Pink Floyd’s The Wall. 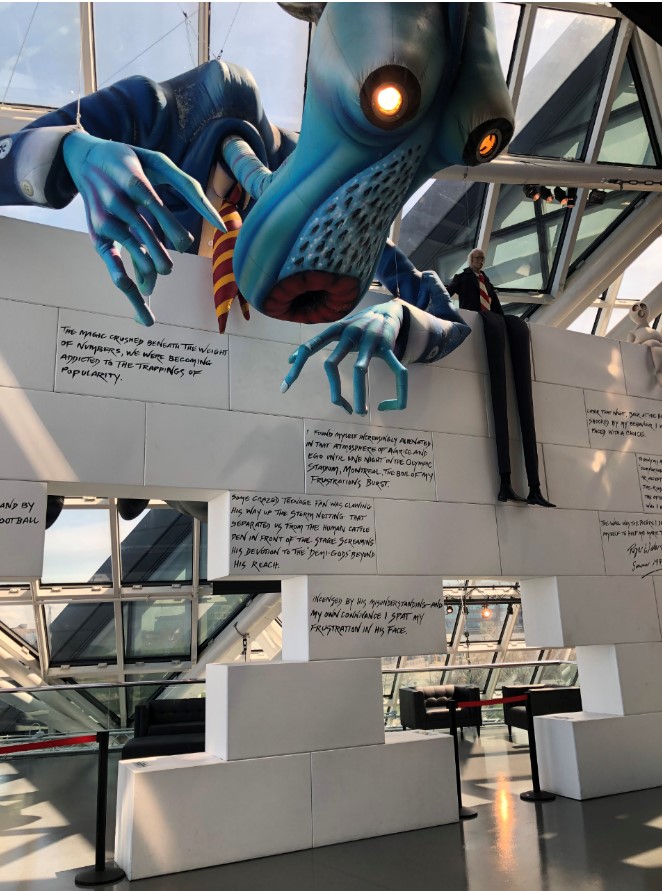 Up around the 4th floor you’ll see displays for the upcoming year’s induction nominees, along with a a small amphitheater which shows a 12-minute video montage of dozens of iconic rock stars performing at the induction ceremonies featuring everyone from Gladys Knight to Stevie Wonder to Don Henley and ending with a searing guitar solo by Prince accompanied by Tom Petty. 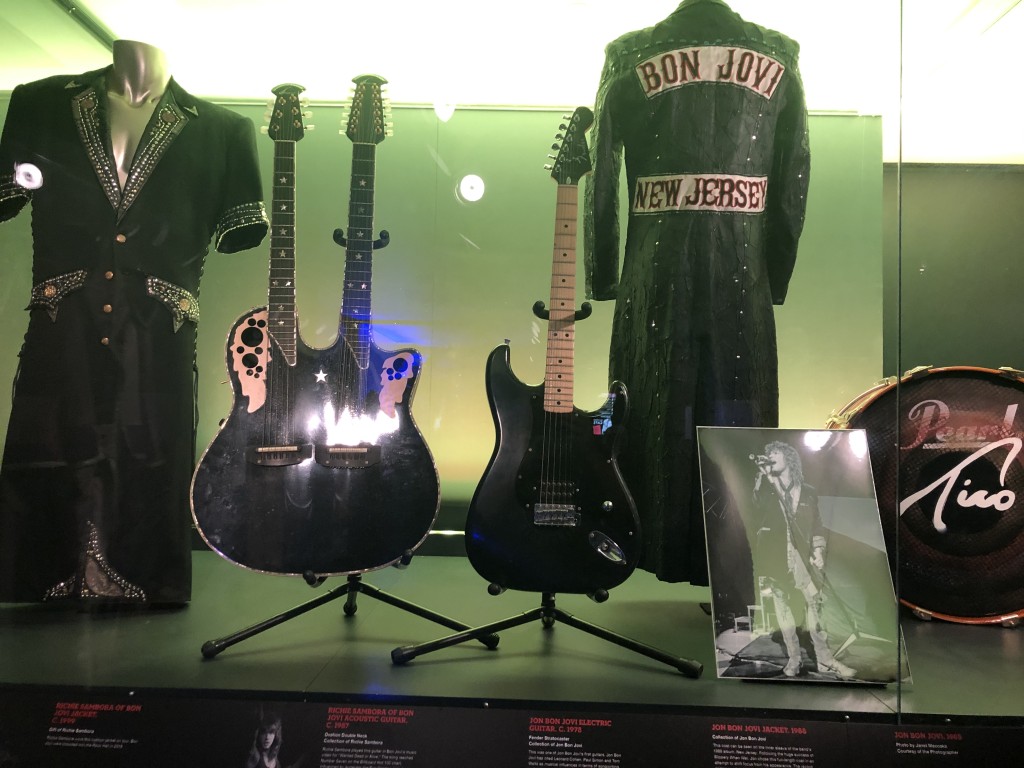 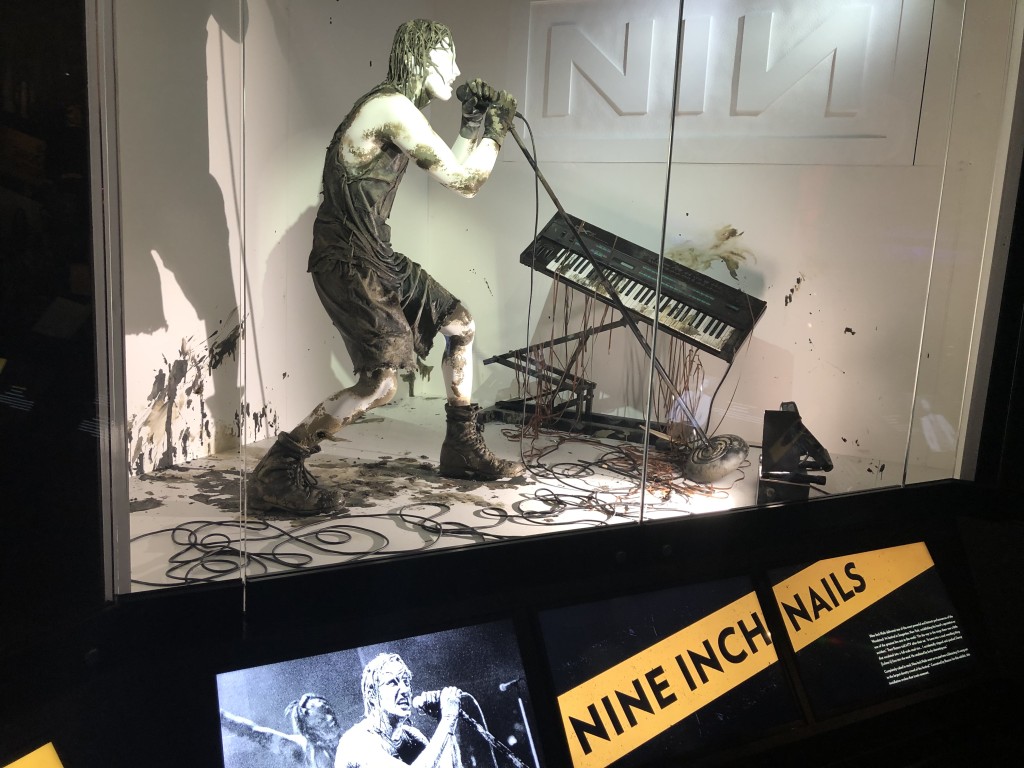 The gift shop takes up almost an entire floor itself, because this gift shop also sells music, namely vinyl, as well as replica Platinum Albums of all the big names, along with the standard clothing, posters, keychains, shotglasses, books, instruments, and anything else you’d like to remember your visit to this musical mecca by.

Anyone with an interest in Americana, nostalgia,  or just music in general with enjoy the Rock and Roll Hall of Fame.  It’s very tastefully done,  extremely informative, and just plain old fun. If you’ve never had a reason to go to Cleveland, this is it.

While in the area:  The Rock and Roll Hall of Fame is right downtown near the water, and there are plenty of things to see within a few blocks.  The Cleveland Browns stadium is next door, plus a dry-docked submarine,  Fireman’s Memorial, and the iconic Free Stamp. Also, the NFL Hall of Fame is located about 45 minutes south of here in Canton.